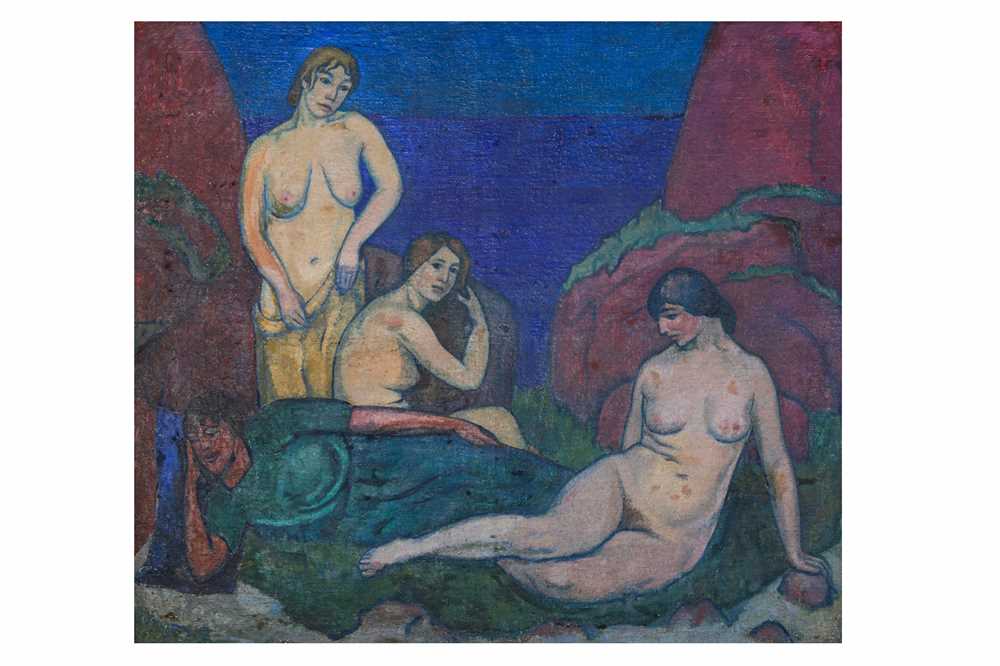 Badende was painted in 1914, a year after Müller left Berlin, where he had been exposed to German Expressionism. The present lot echoes many tendancies found in early German Expressionist works; including the powerful and deliberate use of bright colour and the ornamental flow of lines.

Between 1909 and 1910 Heinrich Müller rented a studio in Montparnasse where he would have been exposed to the work of many of the French Modern Masters and the artists of the École de Paris. Badende pays homage to several artists, most notably Gauguin, Derain and Matisse. The landscape relates closely to Gauguin's Tahitian paintings and to Derain's Fauvist landscapes. Müller has been inspired by these artist's use of bright colour and outlining of the figures. His use of thick contour lines define the bathers and is both pictorial and sculptural at the same time. There is a similarity in his use of line in the present work and Matisse's 1907 masterpiece The Three Bathers, a painting that would culminate in his monumental The Dance. As in The Three Bathers, Müller has painted areas of bold flat colour to indicate the land, water and sky. Similar to the Fauvists, he has deployed colour in its expressive qualities; not merely its descriptive role, painting the sea as a bright passage of radiant cobalt blue contrasting with the warm rust of the rocks and the rich tones of the yellow robe.

The main figure in Badende is reminscent of Manet's seated nude in Le Déjeuner sur l'herbe. Similar to Manet's masterpiece, Müller has painted his central figure with an arresting gaze, staring out at the viewer. It is most likely that Müller would have seen this iconic painting during his time in Paris.