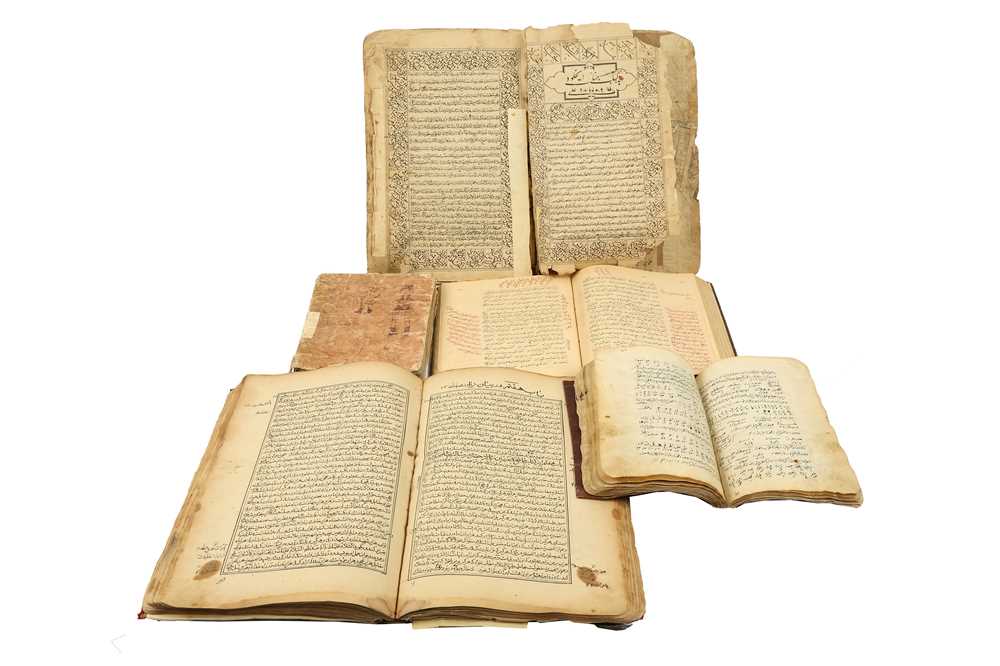 A book of sand geomancy, Persian manuscript on paper, in black ink nasta’liq script, 145ff., each folio with 18ll., significant sentences and chapter headings in red, containing many charts and grafts, in 16 chapters concerning predictions, fly-leaf dated 1257 AH (1841), in patched calf, 20cm x 14.5cm.; The Book of Advice by Gholam Ali bin Sheikh Abolfath Tafrishi, 154ff. plus two fly-leaves, each folio with 18ll. of fine black nasta’liq script, Persian manuscript on paper, with red highlights and markings, catchwords, dated 16 October 1909 to 16 November 1909, a book of quotations and stories regarding Islamic faith and conduct, including talismanic cures for small pox, cholera, the easing of labour pain, and haemorrhoids, and advice on how to conceive a son, in later binding with brown calf spine, 22cm x 17cm; The Jami’ of Abbassi by Sheikh Baha’i (1547-1621) on Shia jurisprudence, Persian text printed on paper, 140ff. plus eight fly-leaves, each folio with 31ll. in naskh script, divided into twenty chapters concerning issues from ablutions to blood-money, printed by Haj Ibrahim, copied by Abdullah Sarabi 1283 AH (1866), in black calf binding and reinforced spine, the text panel 25.2cm x 14cm, the folio 33.5cm x 21cm; Jinnat al Kholoud (Gardens of Eternity), Persian text copied in 1257 AH (1841) by Mohammad Reza Imami Khatoon Abadi, printed 1262 AH (1846) by Mohammad Shafi’ Tabrizi, containing several charts and prayers, talismans for safety, success, and vanquishing of enemies, the text panel 29.5cm x 18.3cm, the folio 34cm x 22cm.; and a manuscript of lamentation poetry on the Tragedy of Korbela, 238ff., each folio with 21ll., Persian poetry on paper, a working volume used by professional narrators in religious gatherings, with the Tragedy of Ghassem in Turkish, in fine nasta’liq script, chapter headings in red, catchwords, in paper binding, 20cm x 14cm.

Assembled at the crossroad of modernity and tradition in Iran’s early recent history, this capsule library is concerned with the occult, the law, and the liturgy, but always on the side of white magic. In an age when medical advancements were sometimes viewed with suspicion, spells to ward off serious ailments and bring about good fortune were still in use. Well into the 20th century, the present owner’s father referred to this group of texts on a regular basis and believed them to be the source of his success. Forming a uniquely Shia-Persian ‘go-to’ library, they offer release from doubts and fears, provide talismans for the most dramatic of jeopardies, solve impossible problems, and offer water-tight rulings on everyday questions. Having securely delivered the believer from evil, the lamentation poetry finally adds a calming spiritual dimension to his soul.