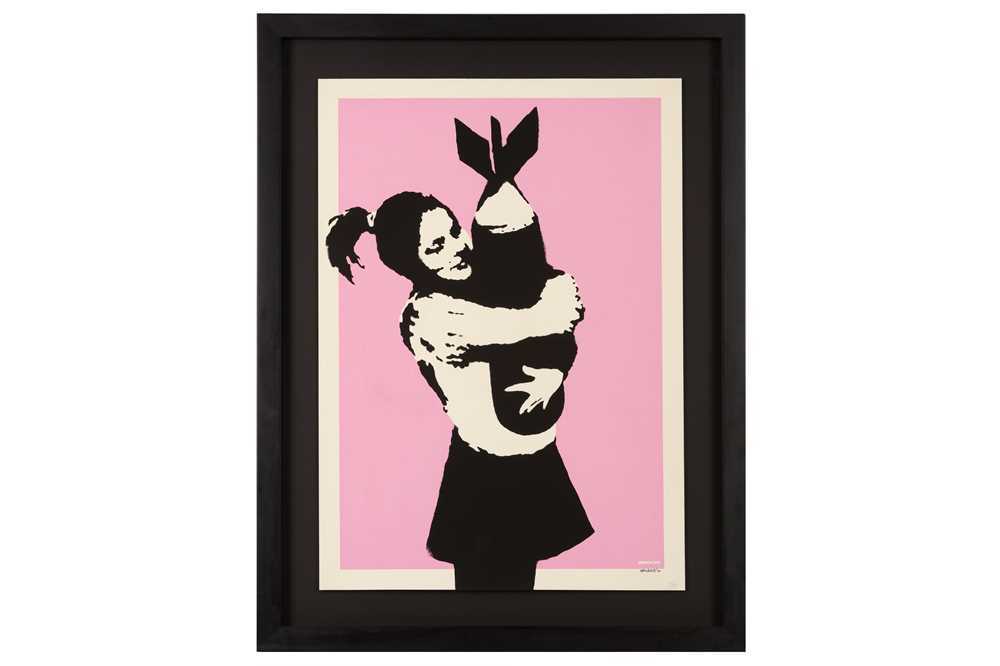 Bomb Hugger, also known as Bomb Love or Bomb Girl, is an early Banksy screenprint. The image of a girl hugging a deadly weapon has become iconic and explores the dichotomy of love and war; a subject popular within the artist’s oeuvre. The bomb appears cumbersome in the child’s small arms, accentuating her diminutive figure & evoking the fragility & innocence of childhood. It is the juxtaposition of the threat of war against this vulnerable and innocent figure that provokes a sense of anxiety in the viewer. Banksy often uses satire to criticise the military and the violence of war.

The work also highlights society’s desensitisation to war. While millions of bombs, weapons are manufactured in our factories and sold to oppressive regimes, rarely does one dwell upon this for any length of time.

In 2003, Bomb Hugger was released as a limited edition of 150 signed screenprints along with 600 unsigned prints. Originally the screenprint came in one single colourway – fluorescent pink. Over the years Banksy reproduced the image in many different formats, on canvas or placards on the occasion of anti-war protests.

“This is a more complex image than it might seem at first. As well as being critical of war, one could interpret Bomb Hugger as a signifier of the power of love, a message that love can overwhelm hatred and thus prevail over war, if only the explosive can be disarmed by the little girl’s loving embrace”
- Joe Syer.