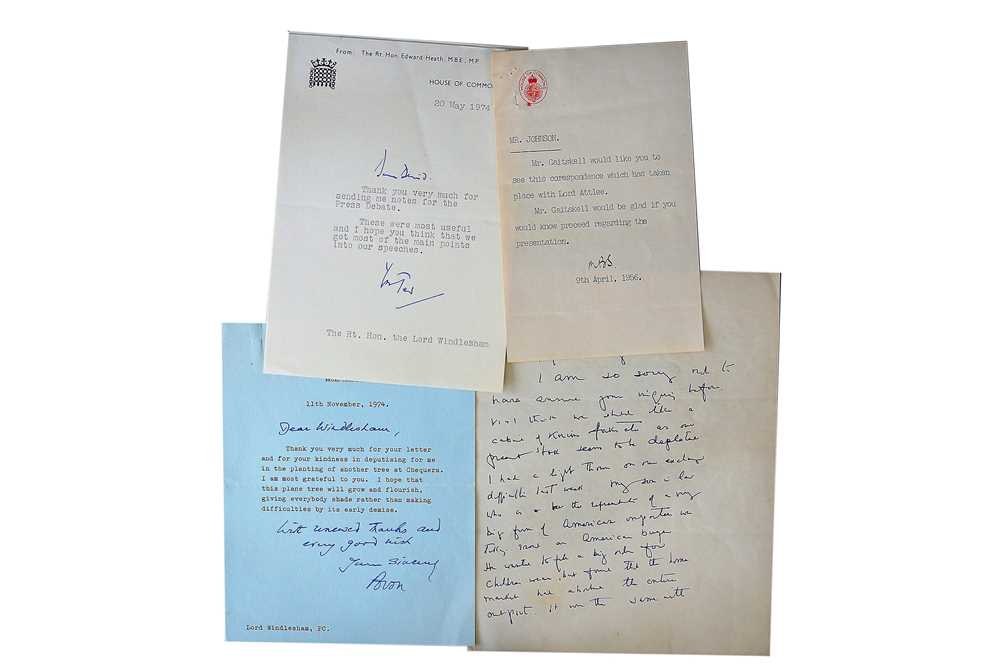 A large collection of letters and ephemera signed by various British politicians, some related to Lord Windlesham, including: Evelyn Ashley (autograph letter saying that Mr Palmerston could not accede to the recipient's request, one page, 5 February 1861); James Keir Hardie (typed letter to C.B. Borg Watson reading "I am much obliged by your offer of hospitality...it will afford me much pleasure to be your guest during the one night I shall be in Edinburgh", one page, 25 May 1911); James Callaghan (Christmas card with printed greetings and signature, additionally annotated "Hope you are feeling better!! Jim"; Clement Attlee (copies of memos relating to a presentation by the Labour Party to Lord Attlee on his retirement on July 27th, 1956 and a letter from Attlee to Hugh Gaskell signed "Clem"); Anthony Eden (typed letter signed "Avon" to Lord Windlesham, thanking him "For your kindness in deputising for me in the planting of another tree at Chequers...I hope that this plane tree will grow and flourish, giving everybody shade rather than making difficulties by its early demise", one page, 11 November 1974); Edward Heath (three typed letters to David Hennessy, one in particular reading "Thirty years ago, on Thursday 18th June 1970, the Conservative Party enjoyed a General Election Triumph that few expected to see...In the 3 and 3/4 years that followed, together we achieved many remarkable things. Everyone knows that we successfully negotiate the accession of the United Kingdom into the European Community...We radically simplified the tax system. We modified the immigration system" and inviting the recipient to a dinner "to celebrate both that victory and the achievements of the government in which we served", one page, 2 May 2000); Douglas Hurd; Barbara Castle (signature in an autograph album); James Starritt; George Robertson; Geoffrey Howe (typed letter suggesting a list of names, marked 'Strictly Personal and Confidential', 14 January 1973); Richard Austen Butler (typed letter discussing some travel arrangements, one page, 6 February 1973); Rab Butler (typed letter to Lady Windlesham); John Mayor (two typed letters to Lord Windlesham, both related to fundraising for Trinity College in Oxford, March 1988); Michael Fraser; David Mellor; John Nott; Evelyn King and many others, v.s., 1861-2000 (c. 80)