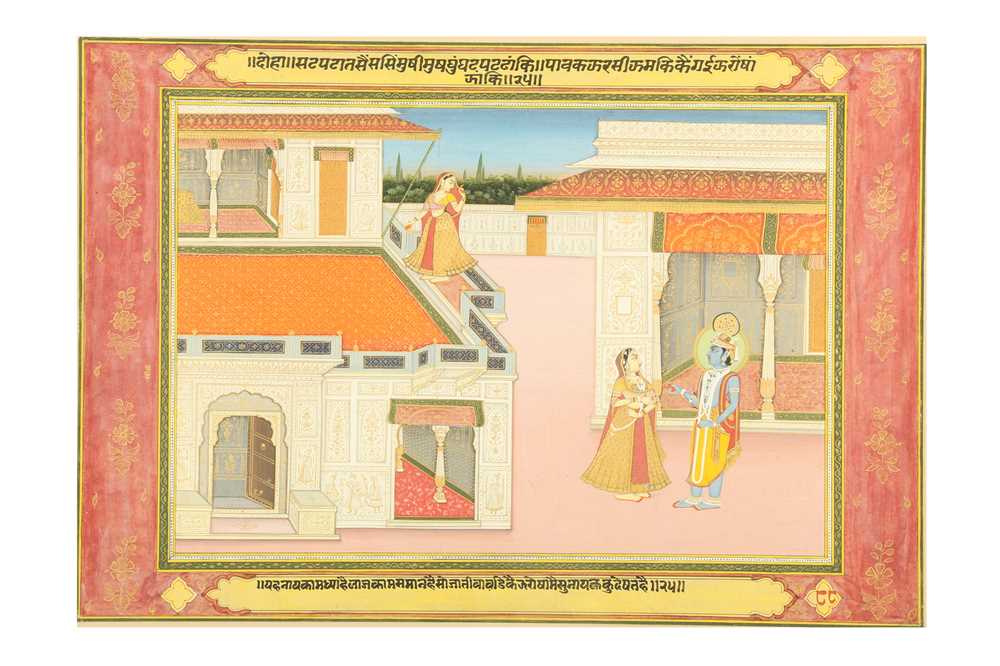 AN ILLUSTRATION FROM A KRISHNA LILA SERIES: KRISHNA IN CONVERSATION WITH A MAIDEN
PROPERTY FROM A PRIVATE GERMAN COLLECTION
Jaipur, Rajasthan, North-Western India, ca. 1820 - 1840

Opaque pigments heightened with gold on paper, the horizontal composition depicting a scene from a Krishna Lila series, marked as number 88 in the cusped yellow cartouche on the lower-right corner, the yellow epigraphic cartouche at the top filled with poetic love couplets of black ink Braj Bhasha dialect, the one at the bottom filled with an explanation of the above couplets in Rajasthani dialect, mounted on cardboard, glazed and framed, 27.5cm x 40cm excluding the frame.

This illustration follows the previous lot and comes from the same early 19th-century Rajasthani Krishna Lila series. In this scene, Krishna is depicted in conversation with a maiden, or possibly a sakhi, in the courtyard of a large palatial compound. The pair is being observed by another maiden, standing on the balcony above them.

Besides the richness of traditional costumes and jewellery showcased here, this illustration provides a wonderful and rather accurate depiction of the sumptuous architecture of Indian palaces. The use of white is indicative of the presence of carved marble panels and architectural components in these buildings. The interiors, instead, are livened and brightened with flamboyant orange, red, green and pink hues, achieving a pleasant chromatic oxymoron with the whiteness of the marble. It is worth noticing as well the gilt marble panels decorating the lower section of the left building's wall. Indeed, they are enhanced with figural designs in the fashion of Safavid and Mughal portraits of eminent characters. Some of the figures are wearing foreign long robes and tall cylindrical headdresses, perhaps inspired here by the miniatures of foreigners, part of the lingering cultural and artistic legacy of the Mughal Era.