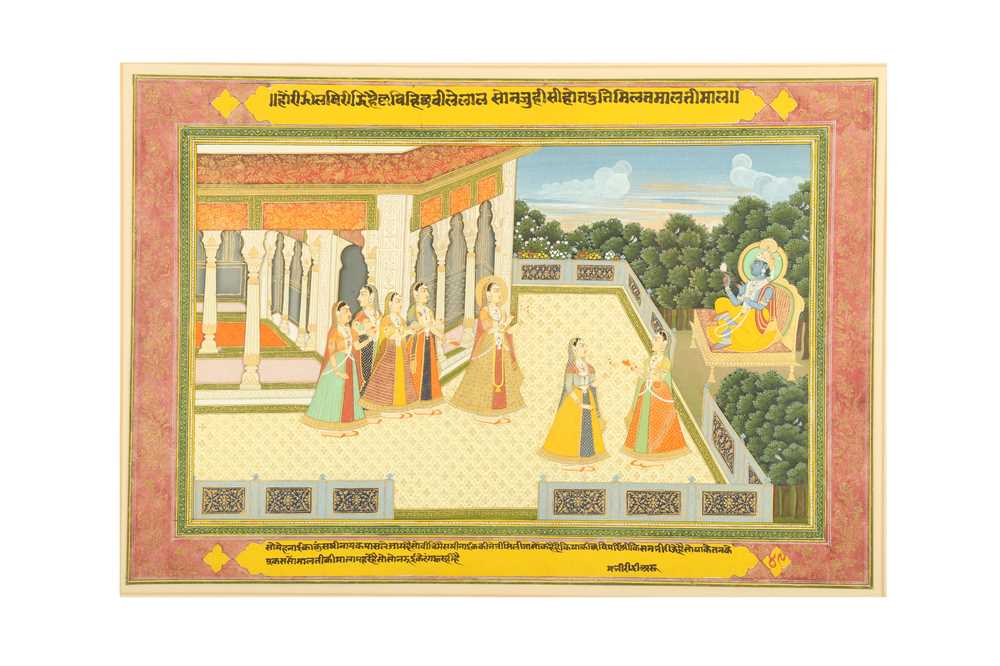 Opaque pigments heightened with gold on paper, the horizontal composition depicting a scene from a Krishna Lila series, marked as number 42 in the cusped yellow cartouche on the lower-right corner, the yellow epigraphic cartouche at the top filled with poetic love couplets of black ink Braj Bhasha dialect, the one at the bottom filled with an explanation of the above couplets in Rajasthani dialect, mounted on cardboard, glazed and framed, 27cm x 40cm excluding the frame.

This illustration follows the previous lot and comes from the same early 19th-century Rajasthani Krishna Lila series. In this scene, Krishna is portrayed seated cross-legged on an encrusted golden throne. He is wearing an elaborate headdress with several pearl strands and a large emerald-encrusted turban ornament (sarpeech). He is calling for the attention of the nayika, still holding the token of his affection (the white lotus flower) in his hand.

The heavily bejewelled heroine is depicted standing just outside the marble pavilion, behind her the usual flock of female attendants. One of them is carrying a lidded food container to offer to the god. The last attendant on the tail of the group appears distracted by something happening behind her; her companion promptly taps her on the arm to bring back the focus to the lovers' reunion. The two sakhis (confidantes) in the foreground, one for each lover, are portrayed in an animated conversation, planning and plotting how to successfully unite the lovers once and for all.

The scene conveys a very lively feeling of trepidation, aiming to lock in the attention of both the readers and the beholders in a crescendo of emotions.