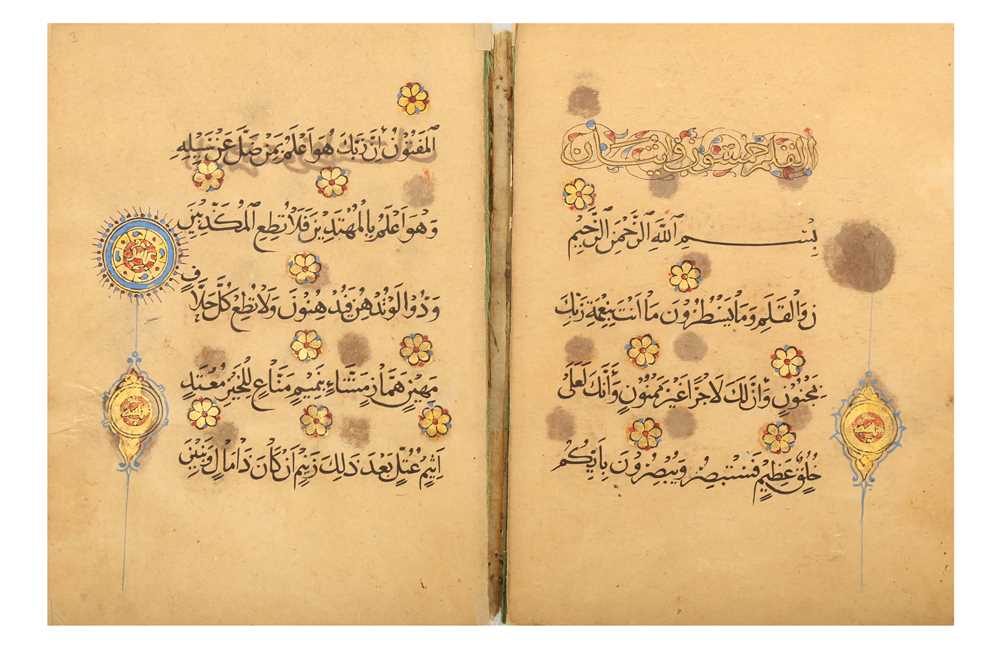 Arabic manuscript on paper, 22ff. loose in tooled brown calf leather Mamluk binding, 5ll. to the page of black naskh script, with gold and polychrome rosette aya markers and illuminated marginal shams and cusped medallions marking different sections of text, four sura headings in gold thuluth against spiraling scrolls decorated with blue and red split palmettes, set in original brown leather Mamluk binding, stamped and tooled with a central roundel with infinite knot design typical of the Mamluk period and a further band of regardant S-shaped patterns on the outer edge, the front and back of the binding signed 'amal Tabrizi/Nayrizi (?) in the upper and lower corners, the text panel 10.5cm, the folio 18.2cm.

The relevance of this Quranic section is highlighted by several elements, including its original signed binding. Firstly, the manuscript presents the typical crisp script and illuminations of works on buff paper usually ascribed to the Mamluk Cairo production of the first half of the 14th century. The golden thuluth sura headings are rather distinctive and appear to share a degree of similarity with a Cairo Qur'an dating 1304 - 6 (D. James, Qur'ans of the Mamluks, 1988, cat. 1). Secondly, another characterising feature of this Qur'an is the choice of resting the sura headings against a ground of vegetal scrollwork with blue and red split palmettes. A forerunner variant in manuscript form to the renowned Golden Horde motif on later ceramics, this charming design was not the most common feature of Qur'ans of the time, except for a similar manuscript copied by Ibrahim ibn Ali ibn Sana al-Mulk dating 1323 (Ibidem, cat.10, p. 224).

A single-volume Mamluk Qur'an dated Sha'ban 729 AH (June 1329 AD) in the Khalili Collections showcases an analogous scrollwork feature, extending it in this case to the full length of the quarter pages (rub'). The spiraling split palmette scrolls are here broken to reveal the words in clouds and make the text stand out in a clearer way (J.M. Rogers, The Arts of Islam. Masterpieces from the Khalili Collection, 2010, cat.178, p.153). Nevertheless, the design of the motif is pretty much in line with the pattern of our juz'. Another peculiar element featuring in this Cairene Qur'an, copied and possibly illuminated by Muhammad ibn Ibrahim ibn ‘Abd al-Rahman al-Maydumi, is the use of fine radiating strikes, or 'hairs', surrounding the marginal illuminations, an element which is equally encountered in our lot and it also occurs in Syrian manuscript of the 1320s.

Last and most importantly, this Quranic section retains its original Mamluk leather binding, which is signed in the small stamped roundels in the cornerpieces of both covers with a word that may be read as the binder's nisba. Signed medieval bindings are rare (only six in total in the former Moritz Collection). For an in-depth discussion and reference to Islamic signed bindings, please see Bosch, Carswell and Petherbridge, Islamic Bindings and Bookmaking. A Catalogue of an Exhibition, the Oriental Institute, the University of Chicago, May 18–August 18 1981, 1981, especially pp. 12, 87, 98-9, 126, 128, 133 and 142.

Another juz’ from the same Mamluk Qur’an with an identical signed binding was successfully sold for £40,000 GBP at Sotheby's London, 14 October 1999, lot 11.