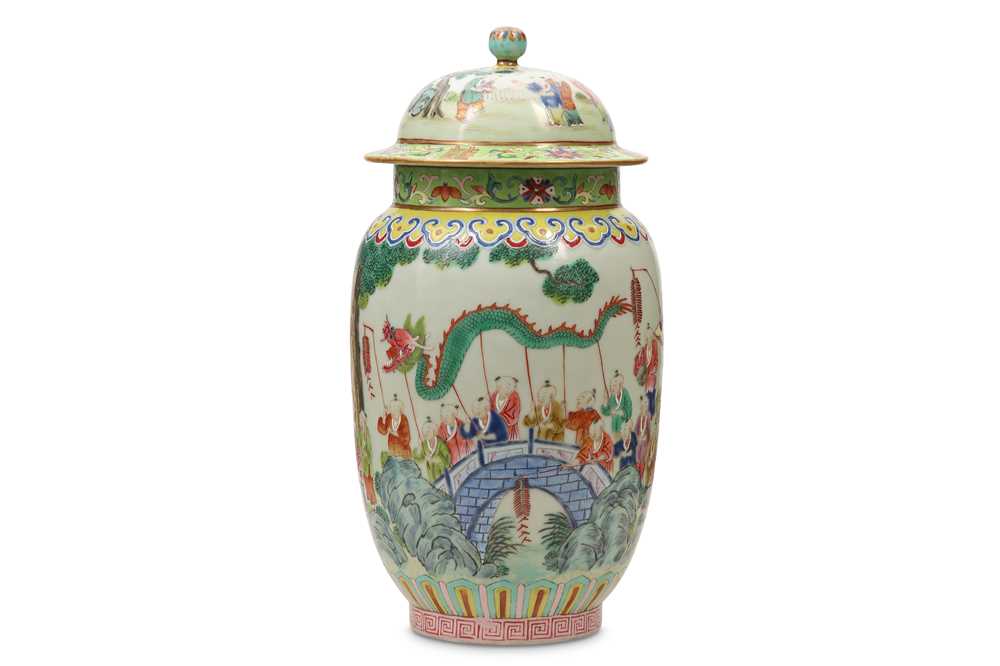 Qing Dynasty, six character Jiaqing mark and of the period.

The ovoid body painted with a continuous scene of a colourful procession of children carrying puppets, banners and musical instruments, the crowd crossing a bridge beneath trees, with a band of ruyi heads to the shoulder and lappets around the foot decorated with key fret band, the neck with floral scrolls on a green ground, the domed cover with a bud finial similarly decorated, 25cm H. (2)

The theme of a 'hundred boys' was very popular in the Qing dynasty, representing the desire for many sons to continue the family line and ensure prosperity and stability. It appears in the Song Dynasty and was popular in the Ming period, however, its present form was an innovation of the Qianlong Emperor’s reign, see for example a lantern-shape vase illustrated in Qing Imperial Porcelain of the Kangxi, Yongzheng and Qianlong Reigns, 1995, pl 87. The 'hundred boys' refers to King Wen of the Zhou dynasty who had ninety-nine sons and adopted one more to make one hundred. The motif indicates the wish for prosperity and recurring themes such as the image of children imitating adults reveals the ambitions of the literati class for their sons to achieve high intellectual status and future success. Various examples of the decoration can be found dating to the Jiaqing period, however, the present example is rare for retaining the original cover. A vase of similar shape was offered by Sotheby’s Hong Kong on 8 April 2004, lot 3055.

**Due to Covid-19, London Chiswick Auctions is operating a skeleton staff working remotely. As a result condition reports and extra images may be subject to delay or limited availability. **