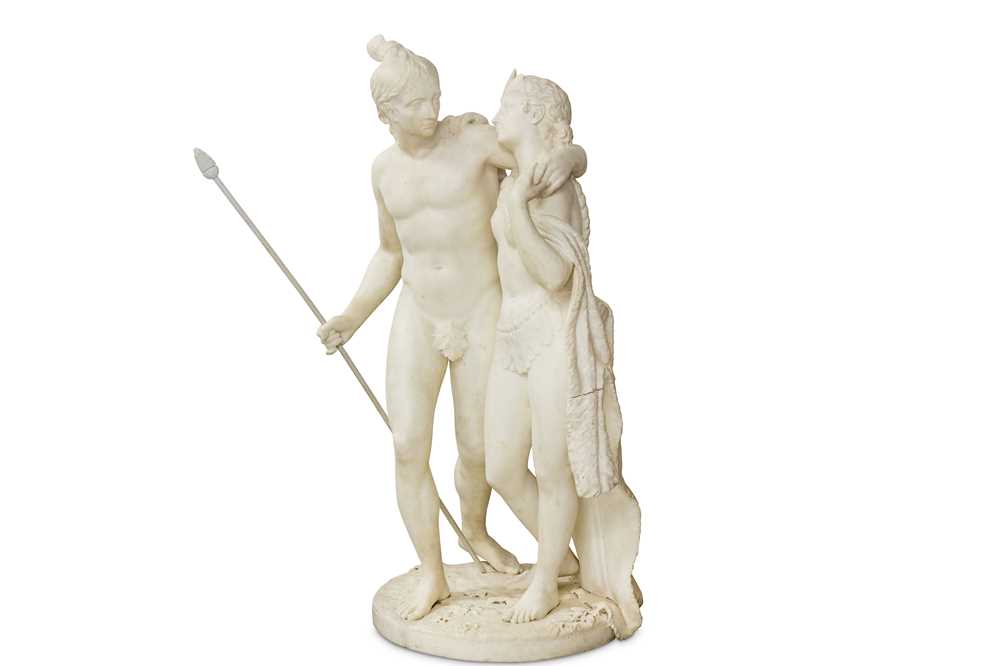 Click for high resolution
MANNER OF EDMONIA LEWIS (AMERICAN, 1844-1907): A LARGE 19TH CENTURY CARRARA MARBLE FIGURAL GROUP OF THE MARRIAGE OF HIAWATHA AND MINNEHAHA the Native American Indian couple strolling together, Hiawatha with his arm around his lover as they gaze into each others eyes, she wears a fur pelt slung across her shoulders, Hiawatha nude except for a fig leaf and carrying a (later) spear, on a naturalistic circular base carved with leaves and flowers,  127cm high Mary Edmonia Lewis was a quite exceptional woman, not only was she one of the few female sculptors working in marble during the 19th century, she was also the first woman of African-American and Native American heritage to achieve international fame and recognition as a sculptor. The restrictions female artists faced in the 19th and early 20th century were numerous, and for sculptors it was even more difficult to succeed as the physical act of moving and carving the marble was extremely strenuous. Lewis was born free in New York and moved to Boston in 1864 where she was finally accepted as a pupil by the sculptor Edward Augustus Brackett after three other sculptors refused to teach her. His speciality was marble portrait busts, and having crafted her own sculpting tools, Lewis began to produce busts of her own, eventually setting up her own studio. Inspired by the abolitionists she sculpted portraits of John Brown and Colonel Robert Gould Shaw. The Shaw family were so impressed with her depiction of the Colonel that they purchased it, and Lewis made reproductions of the bust which she sold for $115 each. She used these funds to move to Rome, where she spent most of her career. Here she enjoyed a successful career and continued to work on themes relating to black and Native American people but used the traditional Neo-Classical style to portray them, The present sculpture is unusual for just that reason, here a Native American couple are depicted in the Neo-Classical style, in a pose much more reminiscent of Cupid and Psyche, or Thorvaldsen's Venus and Adonis or Canova's famous group of the same subject.  Lewis produced her own version of Hiawatha and Minnehaha, which is of similar style to the present group, which like our sculpture, used a visual language that her patrons were accustomed to and admired and yet depicted subjects that were more relevant to her own heritage.