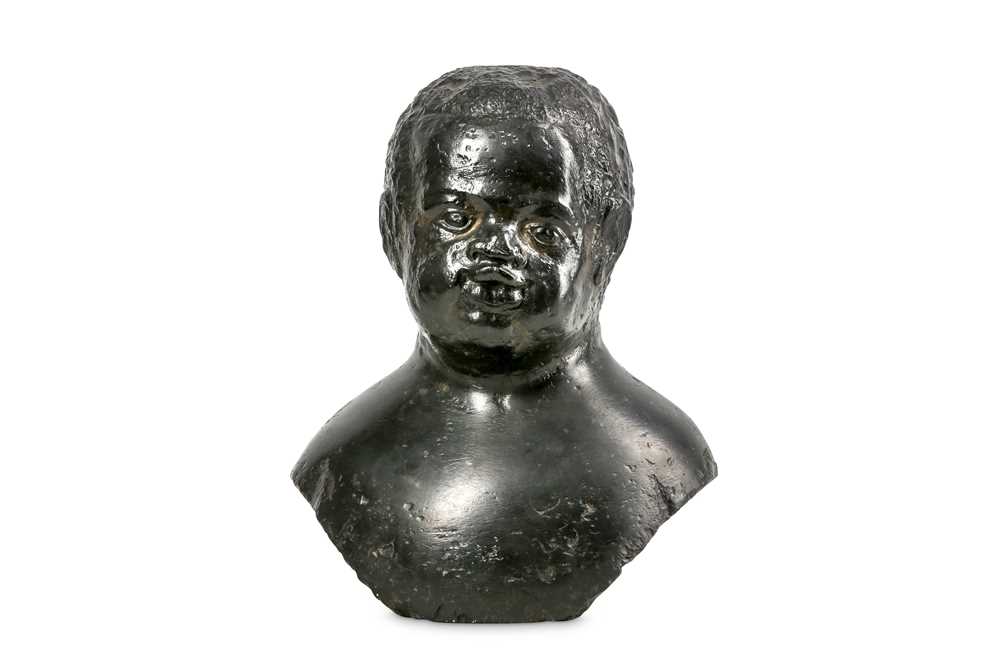 Click for high resolution
A BLACK MARBLE BUST OF A YOUNG MOOR, PROBABLY 16TH / 17TH CENTURY ITALIAN his head turned slightly to sinister, the hair and back roughly hewn, 30cm high This marble bust of a young African boy is depicted in the Antique style, nude and with typical stylised features. The depiction of the moor in European art was revived in the 13th century when used as a heraldic device to represent the victories of certain families during the Crusades. Frederick II (1194-1250) ruler of the Holy Roman Empire established an enclave for black African retainers near his palace in Lucera, southern Italy where he recruited musicians and bodyguards, and their use in art was to express Frederick's worldliness, power and authority as an international ruler. The depiction of the Moor during the Renaissance period continued to reflect these ideas, and the crowned head of a moor in profile became relatively common in German heraldry through the 15th century, spreading to many other European countries.  Alessandro de' Medici (1511-37), the first Duke of Florence was believed to be the illegitimate son of Lorenzo de' Medici and a Moorish slave, Simonetta. Although the identity of his father was disputed, his maternity was not questioned, and he was sometimes known as 'Il Moor' (the Moor). Black Africans were a more common sight in Italy after 1440 when the new trade route between Europe and the west coast of Africa was established and many Italians were involved in the slave trade; during the 15th and 16th centuries the use of black slaves became fashionable suggesting high status, wealth and power as they represented exotic foreign lands. Whether the present bust was produced as a decorative carving in the Roman classical style or whether he was intentionally made to represent these new ideas of power and wealth is unclear. The young Moor as a sitter can also be seen in the early 18th century marble busts by the Netherlandish sculptor Jan Claudius de Cock (1667-1735) who is thought to have produced a series of marble busts of young moors wearing medallions which feature portraits of the patron of the work. One of these marble busts is now in the Victoria and Albert Museum (inv. no. A18-1913).