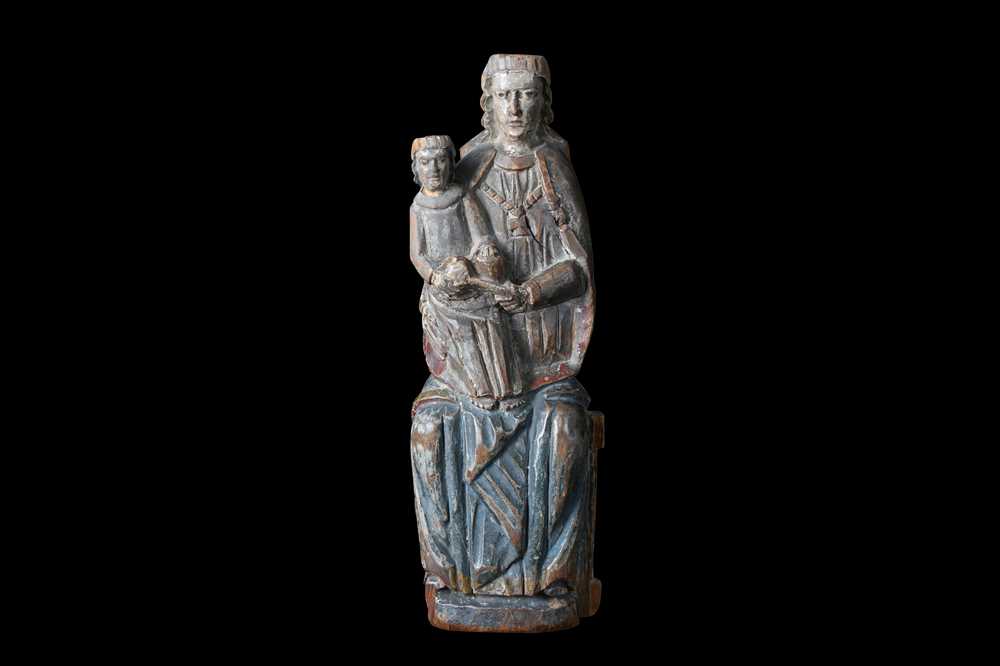 Click for high resolution
A 15TH CENTURY SOUTH GERMAN CARVED AND POLYCHROME LIMEWOOD (LINDENWOOD) FIGURE OF THE MADONNA AND CHILD carved in three quarter relief with flat back, the Virgin seated on a throne and holding the Christ Child in her right arm, who holds two apples, 23cm high  Provenance: Helene Borne (nee Vobach) born in Potsdam in 1875, the grandmother of the present owner. She married Dr Ludwig Borne (b. 1861), a descendent of the German political writer and satirist Ludwig Borne (1786-1837); and they lived in a grand apartment in Charlottenstrasse, Berlin which photographs show was decorated with many sculptures and works of art. The family, being of Jewish heritage on the paternal side, emigrated from Germany in the 1930's and took the carving with them at this time.  This rare and early figural group depicts the Madonna enthroned in a frontal position which echoes the typical position and depiction of Christ in Majesty, reminding us as the viewer of her importance. The symmetrical position of her body, with her knees slightly apart and her drapery falling in geometric folds is typical of the late byzantine style, her hair frames her face and a small hole in the top of her head indicates that she would once have had a crown. She points with a long finger to the two apples that the Christ Child is holding. The polychrome paintwork appears to be original, the mantel decorated in dark blue with red lining and yellow trim. For a comparable South German Madonna and Child see Sotheby's, Amsterdam, 16 April 2007, lot 63. This Madonna also features this combination of paintwork.