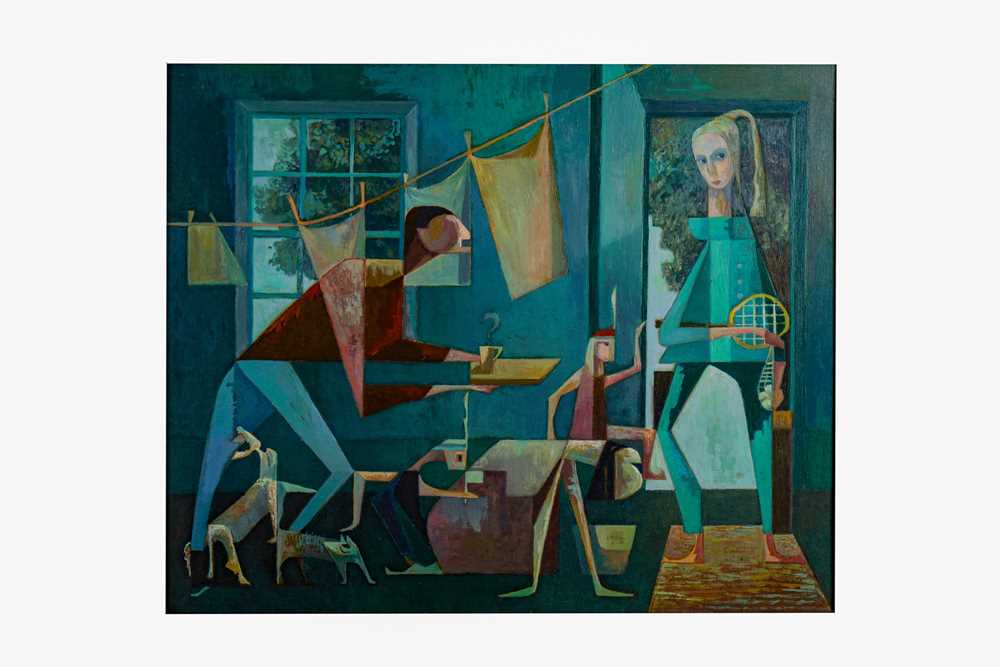 PROVENANCE:
Acquired directly from the artist's studio by the present owner

Celebrated as an art director and production designer, Bernard Robinson’s early career was first as a draughtsman with Warner studios at Teddington, and then with Alexander Korda at London Film at Denham. But it was at Hammer Film Productions, the film company best known for its gothic horror films that he established his formidable reputation. Under Robinson’s artistic leadership from 1956-1969 Hammer dominated the horror film market. Hits included The Curse of Frankenstein (1957) – Hammer’s first colour movie - Count Dracula (1958) and The Mummy (1959), all three starring Christopher Lee and Peter Cushing.

Based at Hammer’s Bray studios in Berkshire, Robinson combined enviable inspiration with great economy of means, as he succeeded in giving Hammer's films an expensive look while working with minimal budget. There he oversaw the design and artistic production of some 76 films. Others included The Hound of the Baskervilles (1959), The Curse of the Werewolf (1960), The Two Faces of Dr Jekyll (1960) and The Phantom of the Opera (1962), the latter one of his most formidable challenges as it required a huge water-tank to be constructed for the Phantom's underground lair.

As well as designing for film, Robinson took a keen interest in painting. As an artist he developed his own distinctive style that drew both on the formal properties of Cubism and the drama of Surrealism. In his subject matter he reflected with both wit and insight many of the darker themes that were such a feature of his day job with Hammer.

Robinson’s artworks possess a particular sense of rhythm and energy. The bright palette and angular lines, draw the viewer’s attention to the finer details in the domestic Family scene (lot 7), full of life and movement. The energetic composition in Danger! Men at work! (lot 8) approaches the subject with a good dose of humour by the juxtaposition of the working men and the passing ladies of leisure. The masked faces and distorted bodies in H.M. Board of Inland Revenue particularly resonate with the unsettled world of today making Robinson’s work ever so relevant.

Influential, charismatic and with a highly original artistic vision, Robinson’s death at the age of 57 in 1970 was cruelly premature. But as he himself was known to have remarked: ‘It's not the length of life that counts, but the quality.’