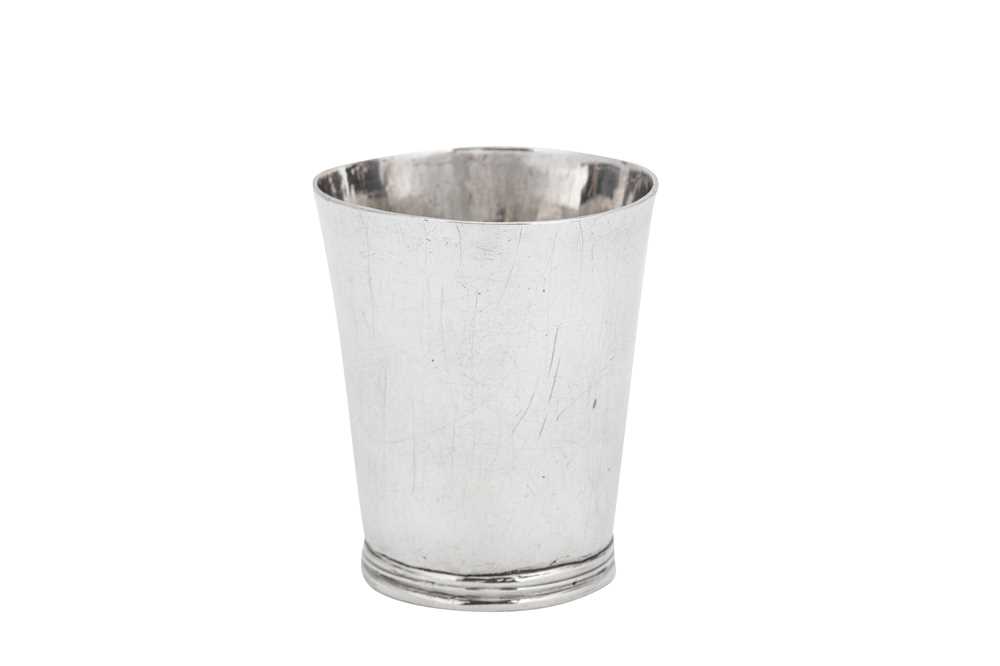 Of tapering cylindrical form, with everted lip and caulked rim. The base section with moulded foot. Engraved underneath with contemporaneous initials MH in Roman script. Marked underneath with makers marks (TH conjoined in Roman letters between pellets), gothic letter G twice and an incuse flowerhead.

Thomas Hutchinson, the main maker attributed to the Great Yarmouth hails from an extensive family of silversmith who are recorded in the Norwich, Colchester and Chelmsford areas. “Thomas Hutchinson of Great Yarmouth (…) bound five apprentices and is last mentioned in 1699, when his son and apprentice, John Hutchinson was admitted freeman of Yarmouth.” Hartrop, C., (2004), East Anglian Silver 1550-1750, Cambridge: John Adamson, p, 96.

This beaker, which has hitherto been unrecorded in silver literature, is an important addition to the corpus of domestic items from English provincial centres, even more so for not coming from one of the towns granted assay under the statue of Henry VI (1423) which were Newcastle upon Tyne, Lincoln, Norwich, Bristol, Salisbury and Coventry. The vast majority of surviving silver from further away provincial areas is composed of spoons and ecclesiastical silver. One must remember that the production rate of silver for a small town such as Great Yarmouth was limited to local requirement, and given that antiquarian interest in silver was not formally established until the publication by Octavius Morgan in 1852 as series of papers in the Archaeological Journal, there were several centuries that 17th century plate could simply be melted in times of need, refashioned or ignorance.

The style of this beaker matches closely those found in London examples of the reign of Charles II and the same marks on this beaker are found on the communion cup at St Mary’s Church, Bungay, Suffolk, for which in 1682 “Mr Hutchinson” was paid £2 11s 4d. Only one other piece of holloware by Hutchinson has hitherto been recorded and that is a twin handled porringer of baluster form, initialled MP within scrolls, this example was initially referenced in the sale of the Ellis collection of early spoons in 1935, later sold Sotheby’s London 27th Jan 1966, lot 318, then sold Mallam’s Oxford 20 April 2016 Lot 328 (£3000 hammer). This porringer has a different but closely related set of marks as found on the present lot.