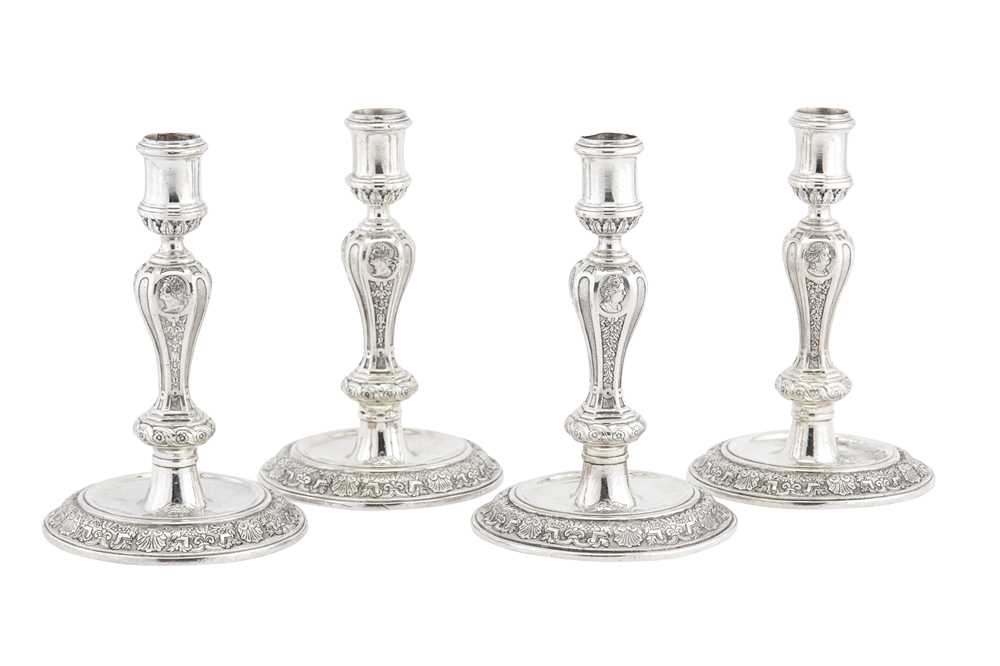 Each of circular form with recessed wells leading to a central column with knop and panelled octagonal inverted baluster section leading to a plain capital with acanthus underside. The base with a cast and chased border of scallop shells and strapwork with acanthus scrolls. The column knop with chased and guilloche border, the baluster section with four portrait masks in profile of imperial figures all above bell flower drops against textured grounds. The well with impaled coat of arms within a baroque style cartouche of an arched pediment with flanking scrolls, reserved with rustication. Each engraved with inventory number and scratch weights; No 1 and 15=13, No 3 and 15=5, No 4 and 15=13, No 5 and 15 =14, respectively. Each fully marked.

The arms are those of Mansell impaling Hervey

It seems quite possible that this set of four candlesticks, likely once a set of eight, were a gift to Busy Mansel and Betty Hervey from the 1st Earl of Bristol, as both of Bussy’s parents were dead at this point and he had not yet inherited the family estates.

Arthur Dicken was apprenticed to William Fawdrey in the 10th Feb 1702, he was free 10th Nov 1719 and signed the petition against foreigners having not served seven years apprenticeship in Feb 1716. He registered his mark on the 18th June 1720 at The Angel, the Strand.

Items bearing his mark are distinctly scarce and surviving pieces are often more plain in nature such as the footed salver of 1722 made for Thomas Bowers (1660–1724) Bishop of Chichester, sold Bonham’s New Bond Street, 22 Nov 2006, lot 199 (£3,120 incl. premium). However, a cup of cover of 1721, is of comparable decorative surface to the present lots with “elaborate strapwork incorporating female masks headed by shells on matted ground”, sold Sotheby’s New York, 11 April 2000, lot 207 ($6,600 incl. premium)