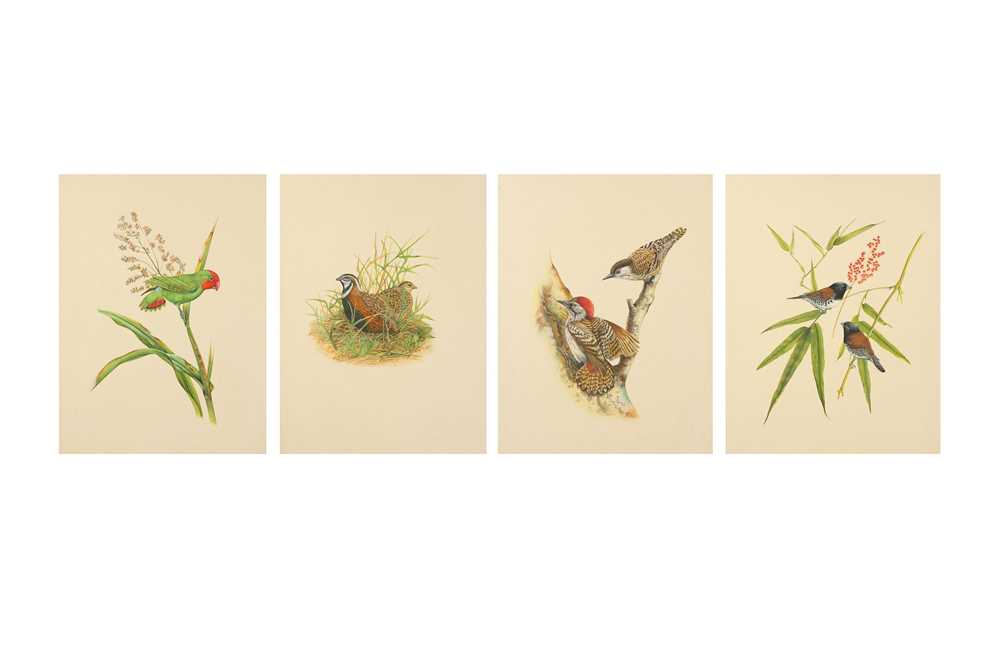 Opaque pigments on cardboard, comprising four vertical compositions of studies of birds in their natural habitat, each study with a different species from red woodpeckers to green parakeets, three studies with male and female exemplars, the parakeet on its own, the fauna consistent with their foreign origin, the background left blank, the details of their plumage consistent with Company School paintings' attention to naturalistic rendering of Indian fauna and flora, each 53.5cm x 38.4cm.

In the late 18th century, Indian painters developed a new interest in the nature surrounding them thanks to the commission of several drawings and watercolours from the East India Company officials. Most zoological drawings of this period display a white background, an inspiration the Indian painters had drawn from European natural history prints of the 18th and 19th centuries. This choice went against the Mughal pictorial tradition, in which the background normally presented landscapes or interior settings, and it created a true hybrid artistic style. The ornithological studies in our lot share the artistic style of the Impey Album, produced in Calcutta in the late 18th century. The attention to minute details and the use of gem-like highlights and brilliant colours to create life-like drawings are distinctive features of the Calcutta school. Though later, our lot seems to have been inspired by the Album and by his master's brush, Shaikh Zain Ud-Din, showcasing the popularity and long-lasting success these drawings encountered in India among Western travellers and clerks. For more information on the Impey Album and the Calcutta school, please see William Dalrymple, Forgotten Masters: Indian Painting for the East India Company, London, 2019, chap. 2.