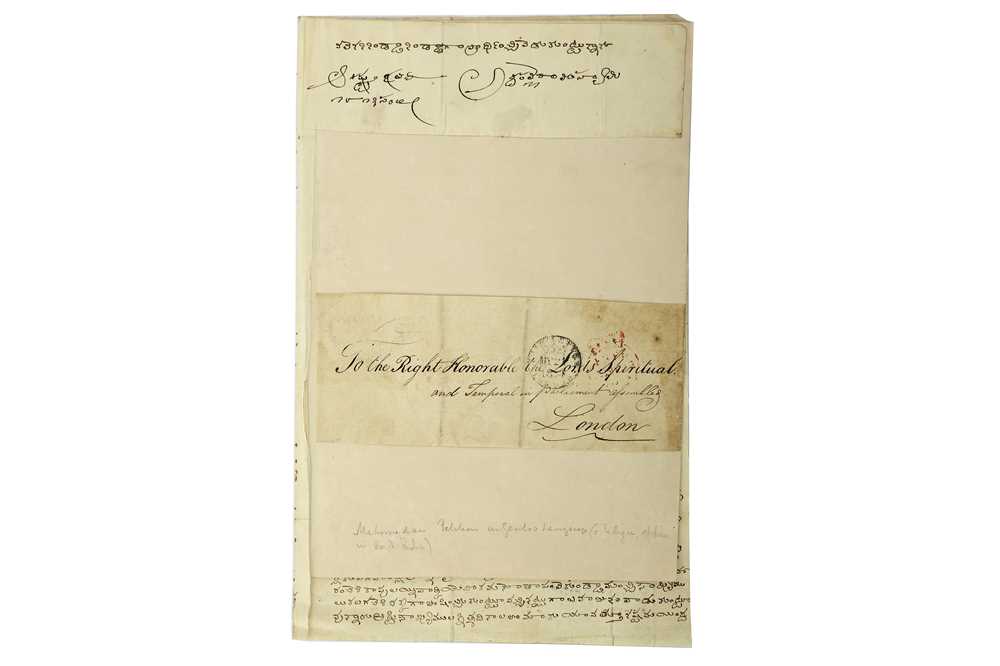 A TELUGU PETITION LETTER OF ADDEPALLI RAMASWAMI WITH AN ENGLISH INTRODUCTORY STATEMENT ADDRESSED TO THE HOUSE OF LORDS
England and South India, dated 2nd August 1814

Black ink on cream-coloured paper, 15ll. of cursive English script and 43ll. of Telugu script, the first page with the portion of the original address to the Right Honorable the Lords Spiritual and Temporal in Parliament Assembled in London, on laid paper watermarked with the East India Company bale mark (VEIC, Vnited East India Company) in its 18th-century format, two stamps, a circular black one dated 1814 and number '21', the latter red with the Royal Crown insignia at the top, a later annotation in pencil at the bottom of the page Mahomedan Petition in Gentoo language, Telugu, spoken in South India, the covering letter in English requesting a faithful and accurate translation of the Telugu letter and setting a seal to the document to authenticate it, on laid paper watermarked J Whatman 1809, held inside a document box with the Newberry Library Chicago seal, 31.7cm x 20.2cm the letter.

Provenance: purchased from the Newberry Library in Chicago (old inventory no. ORMS 757) in 1995.

This document is a rare and interesting example of Anglo-Indian interactions before the Mutiny in 1857 and the establishment of the British Raj (1858 - 1947). The paper presents two different watermarks. The address area clearly shows the VEIC (Vnited East India Company) bale mark in its oldest format, commonly used in the 1700s. This consists of the initials of the Company within a heart, tiered by two flaunches and crested with a '4'. The second watermark is that of the famous English paper-maker J. Whatman, established in the 1750s in Maidstone, Kent. The first mill was called Turkish Mill and it was active until the end of the 18th century. In 1804, J. Whatman paper production was moved to Springfield Mill, also in Maidstone, Kent. Here, the paper-making industry progressed and continued successfully for another 150 years.The date in our watermark is indicative of the second stage of Whatman paper manufacture, the one produced in the Springfield Mill.

Throughout history, it seems that Whatman paper gained particular respect and favour with Heads of State and world leaders. According to the company archives, Queen Victoria chose Whatman paper for her personal correspondence. It should thus not surprise us that this paper is being used for an official letter addressed to the House of Lords.

The content of the petition letter is also worthy of mention. Firstly, the English covering letter provides the reader with a series of relevant information. The foreign language of the letter is called Gentoo, an Anglo-Indian term used in the 17th and 18th centuries to identify the language of the indigenous people of India, specifically the Telugu-speaking people of the Madras province (now the Andhra region). The etymology is unclear, but it probably derives from the Portuguese term Gentio (native, indigenous). Secondly, the requests to the House of Lords to translate the document literally and accurately and to add a seal to the official translation in case "tricks should be otherwise played" is revealing and significant, possibly hinting at some hard feelings felt towards the locals that were widespread in India around this time.

The translation of the Telugu text confirms the nature of the document as a plea of help by Addepalli Ramaswami to the House of Lords, stating that the immigrants from Hyderabad, likely to be of Muslim faith, were causing great sufferings to the Kapu caste, a social grouping of agriculturists and cultivators local to the region of Andhra Pradesh. The letter also reveals that the Kapu people and the Hyderabadis had clashes in the past, which were settled by the local kings. Mr. Ramaswami thus begs the House of Lords to take on the role of the past rulers and to assist the autochthonous caste restoring the peace over their lands.

A full translation of the letter is available. If interested, please contact the Head of Sale directly.