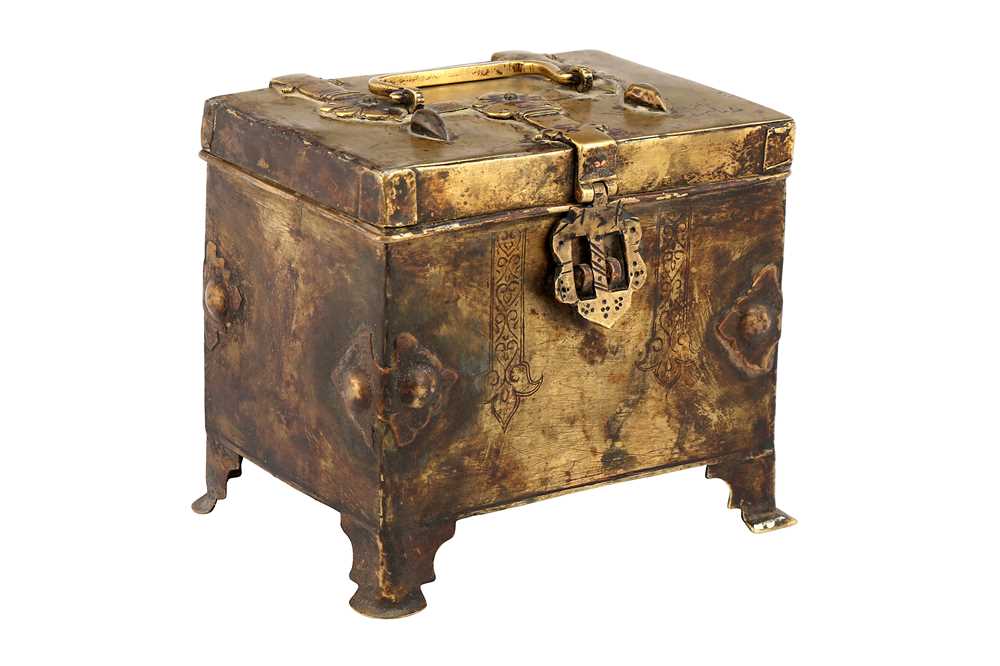 Of rectangular shape, resting on four projecting, cusped bracket feet, each corner enhanced with an applied brass split palmette strip, the hinged lid with decorative bands terminating in large cusped palm leaves in relief, the clasp with a similar hinge, with two raised drop-shaped elements and a faceted handle fixed to the lid, with four circular marks possibly indicating an original use as a combination casket, the front and reverse engraved with decorative bands of interlocking vegetal sprays and foliage, the interior with reinforced corners and two brass rings remaining from the original system, the hinges possibly an old replacement from the 12th and 14th century, the clasp replaced at a later stage, 16.2cm x 18cm x 12.5cm.

The shape of our casket and the peculiar stylisation of its hinges link this lot to Arab-Sicilian and Spanish prototypes, often made of ivory and mostly dating to the 10th - 12th century. In the collection of the Bargello in Florence, there are two such caskets: one attributed to Sicily, 11th - 12th century (inv. 85C), incised and painted with hunting scenes; and the latter attributed to Spain, late 9th - early 10th century (inv. 81C), finely carved with pairs of animals amidst lush vegetation and with a band of Kufic calligraphy on the rim of the lid. Another casket analogous to the Arab-Sicilian example of the Bargello is in the Lazaro Galdiano collection in Madrid (inv. 3200), featuring brass hinges both on the lid and corners, and painted with vegetal and animal motifs in gold.

All these caskets share a compact rectangular shape and elongated hinges, two at the back and one at the front with the clasp. Moreover, the hinges always present a cusped ending like a stylised drop-shaped arrow or palmette. It is not hard to believe that similar prototypes would have travelled and been widely available in different centres throughout the Mediterranean coast, Sicily and Spain being the main manufacturers. With time, it is likely that craftsmen introduced minor changes to the style of the decoration and opted for sturdier and more long-lasting materials such as brass, but they kept the basic design and shape of these caskets almost unaltered, as evident in our lot. Lastly, the decoration of our casket, with its finely engraved stripes with trefoils, can also be compared to that found on another Sicilian casket in Doha, dating circa 1100 (Metalwork Treasures, Doha, 2002, p. 50, cat. 12).