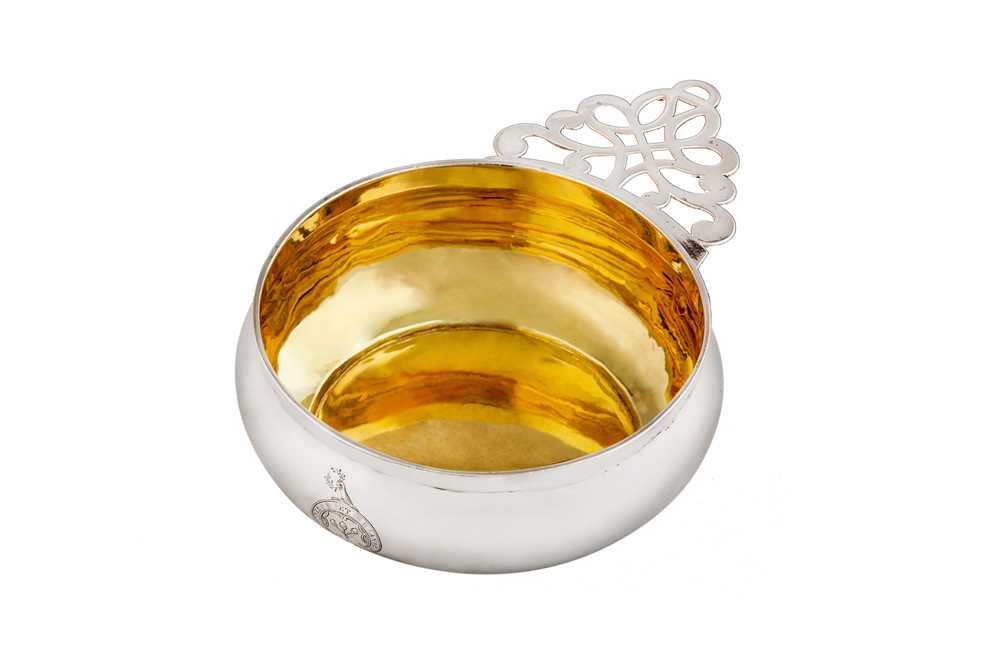 Of compressed circular form with straight rim, the open work pierced interlaced scroll side handle. The interior later gilt. The front with later engraved coat of arms encircled in the motto Fidus et Amor, surmounted by a crest of a hand grasping a garland. Marked underneath H&M four times.

The arms are for Willink

for John Abraham Willink (1780/81-1852), perhaps owned previously by his father Wilhelm Willink (1750-1841) a wealthy Dutch merchant and financier of American businesses in the late 18th century. In 1790 Willink was part of a group of thirteen investors that formed the Holland Land Company. The company purchased large areas of land in western New York and northern Pennsylvania, which they resold to settlers and emerging businesses. In 1792-1793 the Holland Land Company purchased 3,250,000 acres in western New York from Robert Morris (1734-1806), a signer of the Declaration of Independence and the richest man in America at that time. A decade later Willink was an investor in the Louisiana Purchase. The town of Willink in Niagara County, NY was named for him in 1804.

Willink's son, John Abraham Willink (1780/81-1852) was a prominent businessman with dealings in both New York and Liverpool, England. He partnered with his cousin, Daniel Willink (1779-1859) to form the company D. & J..A. Willink & Co. with offices in both New York and abroad. He married Cornelia Ann Ludlow on 2 May 1816, and the couple maintained a large country estate in Flatbush Long Island. Willink died suddenly in 1852 due to injuries sustained from a fall from his horse. As the couple had no children, the estate passed to Cornelia's relation, Maria Phillip Selleck James (1815-1910), who bequeathed a portion of her collection of decorative arts to the Metropolitan Museum of Art. John Abraham Willnk is part of a group who are chiefly remembered as investors in the Louisiana Purchase (1803) which enabled the United States of America to acquire 828,000 miles of Louisiana from France. J.A. Willink and Daniel Willink were partners in trade in New York, under the firm of J.A. Willink & Co; they were also in business together in Liverpool with Charles Latham (J.A. Willink’s father-in-law) as D. & J.A. Willink & Co. Both these houses ceased trading during 1819, when they were said to have been ‘notoriously insolvent.’

The partnership of Myer Myers with Benjamin Halstead (1734-1817) was formed about 1756 and was the first partnership of silversmiths in New York, the earlier being in Boston between John Hull and Robert Sanderson Snr in 1652. This partnership created a new form of mark for the American colonies, the partnership mark of a H&M. While this went on to become common by the end of the century, this introduced a new way of working for silver ordered through this partnership. Only around 20 items are recorded as surviving from this partnership

Newspaper articles form the 1760’s advertise the partnership’s range of activities, as well as two surviving bills of sale from the same time. Over all the partnership is associated with plainer, smaller objects than those marked for Myers alone which often utilised Rococo ornamentation. It is believed that Benjamin Halstead’s main contribution to the partnership was more of a retailer, gaining orders or holding stock awaiting sale, this certainly coincides with Halstead’s career post-independence being a retail jeweller. It unclear when the partnership ceased, be it in 1764 or in 1766, as on the 5th July 1764 they had moved “to the store house of Mr Elias Desbroses where messrs, Phenix and Broom latterly kept store, being the next corner to Mr Henry Cuyler”. By the 22nd of October 1765 Halstead had married and by the 17th Sep 1766 announced a partnership with his brother Mathias in Elizabeth, New Jersey. It is possible that the partnership continued in some form up to 1770.

The porringer presented here shares the same form as another porringer marked for this partnership which is on loan from the Burrows Collection to the Sterling and Francine Clark Institute, Williamstown, Massachusetts, as well as one marked for Myers alone in the Yale University Art Gallery. Both porringers are illustrated in Barquist, D. L., (2001), Myer Myers Jewish Silversmith in Colonial New York, Yale University Press, P.132-33, Fig. 45 & 46. It is noted that there are at least four porringers with this form of handle by Myers and other New York silversmiths associated with him.

This porringer differs in its marking structure from all the documented Halstead and Myers pieces. This piece has four strikes of the mark, rather than just H&M along or in combination with the N.YORK mark, or with the MYERS mark.

There are two versions of the H&M mark recorded in ibid p. 258-259, neither of these marks is a close match for the mark on this porringer. This porringer’s mark has the ampersand on its side, unlike the most encountered version of Halstead and Myers mark. The second Halstead and Myers mark recorded does have a somewhat sideways ampersand, but the cutting of the H and the M is different, noticeably to the serifs. Therefore, not only does this porringer present a new marking procedure for the partnership but also a previously unrecorded version of the mark. Until more examples of Halstead and Myers pieces come to light bearing this mark, it can be thought that it represents a short period of use by the partnership, possibly after their supposed cessation. This piece importantly contributes to the oeuvre of Myer Myers, allowing scholars access to a new mark and marking format for this most important of Jewish silversmiths working in the new world.