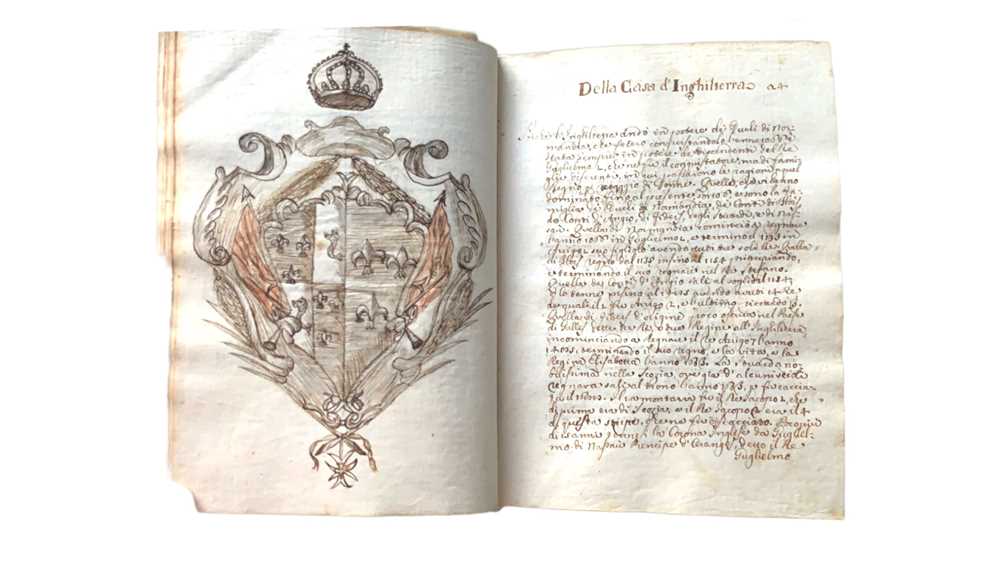 *** Very rare work with only two other copies recorded: the first one is incomplete, consisting of only 140 pages (manuscript n. MS B.286 bis, at the Biblioteca Civica centrale di Torino (Italy); the second one, complete, at the Vatican Library in Rome. History of 28 European princely Houses, all but 2 (House of Olstein and House of Curlandia) with the drawings of the correspondent coat-of-arms. The work was never printed and circulated only in (most probably few) manuscript copies. Along with the most important ruling dynasties of the time, the author mentions some of the smaller ones, such as the family Pico della Mirandola and “Cibo dei Duchi di Massa” (Cybo-Malaspina, princely house that reigned in the Duchy of Massa and Carrara, in Tuscany, from 1553 to 1790). The Pico della Mirandola were closely related to the Sforza, Gonzaga and Este dynasties and were sovereign of the Duchy of Mirandola, in Emilia, near Ferrara, that existed from 1310 until 1711. Such mention is especially interesting, because allows to date the present manuscript before 1711. Federigo Burlamacchi (1652-1726) was born in Lucca, from a well-known family and lived almost all his life in Siena. He’s mostly known for his edition of the Letters of St. Catherine of Siena, and for his works on geography.