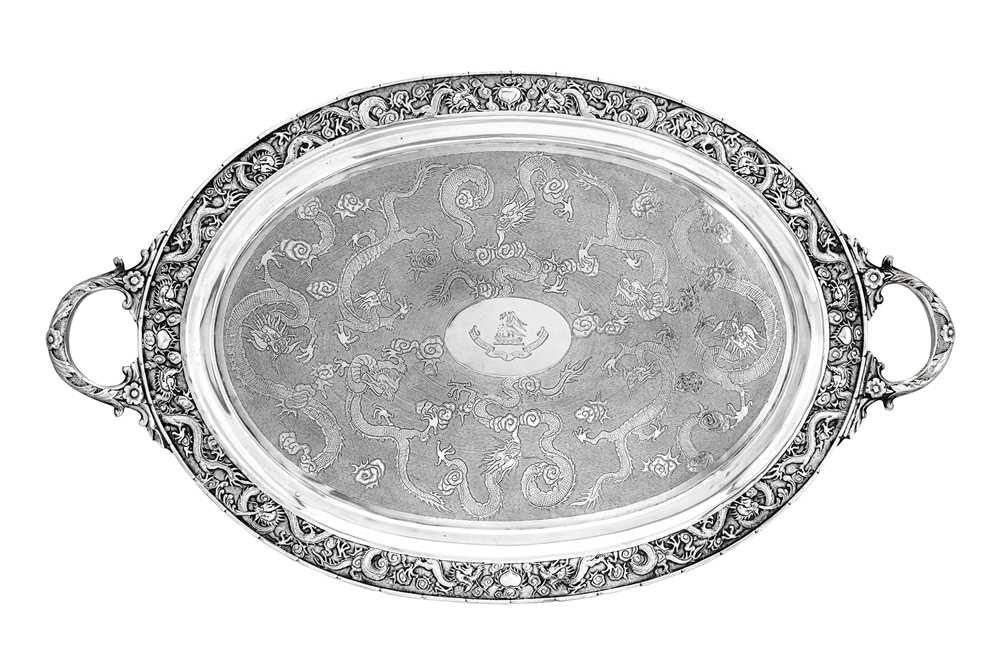 Qing Dynasty, of oval form, raised on four cast leaf and scroll bracket feet. The cast and chased twin handles formed as flowers heads and curled leaves with fish scale reserve. The tray with simulated bamboo rim and broad edge with embossed trailing Chinese dragons among clouds with four vacant heart form cartouches. The field with flat chased decoration of Chinese dragons among clouds against a ring punched textured ground. The centre with an oval cartouche engraved with a crest of a pelican in her piety, with the motto above Je meurs pour ceux que j'aime. Marked to the reverse with retailer’s mark of WH, 90 and workshop artisan mark SUI CHANG 遂昌

The crest and motto are for Paterson

“Charles James George Paterson the last of his line was a laird of the old school with a paternal care for his people. He was imperious, brooking no opposition; yet withal he was considerately kind.

Victorian in mind and habit Mr Paterson was far from being cynical towards modernism. His outlook was large; his sympathies were broad. In the Lyon dining room at The Cottage in Longforgan he would, in a shrewd and charming way disburse his knowledge of the world and human nature felt, seen and heard in the course of travel far and wide. His early career was passed in India where he captained the Calcutta Cricket Club. […]” Obituary 29/4/39

The Canton based workshop of Sui Chang is noted for large high quality wares, particularly with finely pierced decoration such as trays and dragon footed bowls. As a retailer Wang Hing operated longer in Canton than in Hong Kong. (We are grateful to Dr Adrien von Ferscht for bringing to our attention the rarity and importance of the workshop of Sui Chang)