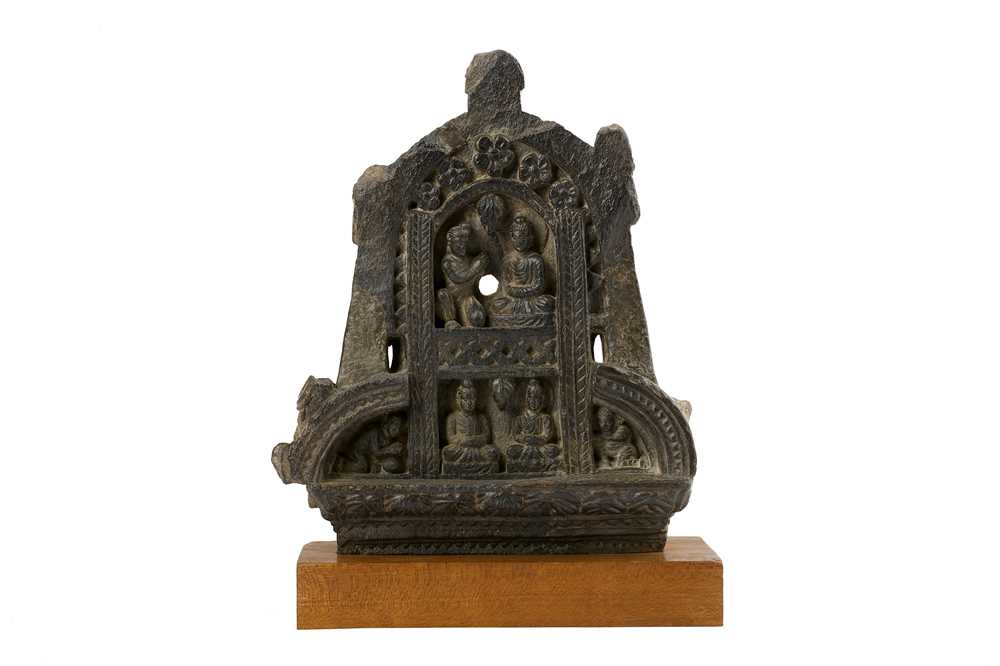 A GREY SCHIST CARVED GABLE RELIEF WITH A BUDDHA IN MEDITATION
PROPERTY FROM THE MOITA COLLECTION OF GANDHARA ART
Ancient region of Gandhara, 2nd - 3rd century

Shaped as an arched torana (stupa gate), with flattened sides and deeply carved in the centre, the tall horseshoe arch in the middle with two main rectangular niches filled with haloed Buddhas in meditation in lotus position, holding the dhyana mudra, above them a lush Bodhi Tree leaf indicating their level of Enlightenment, wearing a multi-folded cloak covering their whole bodies, an attendant knelt and paying his respect to the meditating Buddha on the upper level, two small dwarfs in the niches next to the main panel, the architectural structure decorated with geometric fretwork bands, vegetal sprays and large rosette heads at the top, mounted on a later wooden base, 36.5cm x 26.3cm including the base.

Gable carvings with this specific arched design used to be affixed to the drums of large and small Buddhist stupas, where the story of the Buddha's life started. Their purpose was to narrate the events in a story board-like sequence, which could be read by the practitioners step by step, as they attended the ritual process of circumambulation. A number of similar gable reliefs has been offered at auction, please see Christie's New York, 20 September 2007, lot 232; and 20 March 2009, lot 1253.