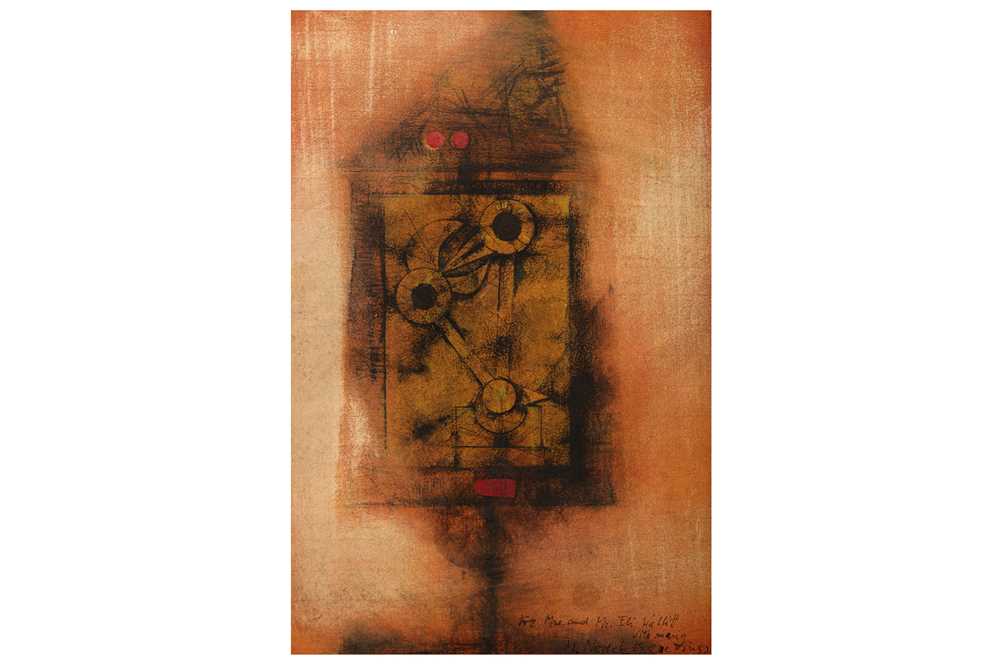 PROVENANCE:
Acquired from the artist by Mr and Mrs Eli Wallitt in 1969

The mysterious spectral presence of the present composition confirms Medek’s position as one of the most original voices within the Czech visual arts to emerge since the Second World War. Undeterred by the strictures of the Communist government of the day, the artist was persistent in his quest for creative freedom. And the unique character of Medek’s work remains as sinister and startling to us now as it was when the artist was alive.

In style and composition the work bears some comparison with the paintings and sculptures of Max Ernst: the worked surface, the forms and symbols, the abstraction of figural elements, the essential flatness of the motif. But unlike Ernst, whose work always retained an underlying sense of decoration, this work incorporates no such distraction. Rather it exhibits an unremitting sense of anonymity and dislocation, the mouth and beak emerging from the darkness with an aggressive impersonality.

That Surrealism informed Medek’s style is not surprising. Prague had been a hot-bed of Surrealist activity since the 1920s. Up until the Second World War and well into the 1950s there were many and diverse exchanges between Surrealists in Paris and their counter parts in Prague. But as divisions and dissensions grew among the group in the post-War years, so Medek retreated from an overtly figurative style, to create a wholly new more inscrutable aesthetic during the 1960s. The tenor of his work reflected the political climate, Medek’s anxious imagery suggesting the repression of the country during Communist rule, and the hectoring of the Soviet Union in particular.