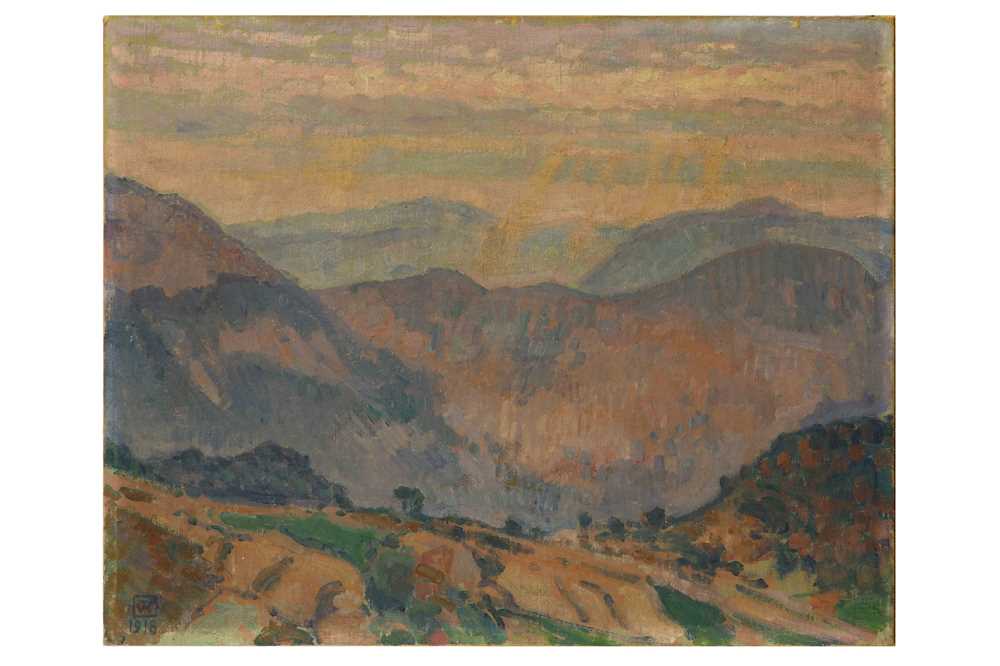 PROVENANCE:
Baron Adrien Victor Joseph de Gerlache de Gomery (acquired from the artist in 1920. A keen sailor and seaman from his teenage years, de Gerlache made his reputation as an explorer of Antarctica, leading the Belgian expedition to the South Pole of 1897-99. He set sale in August 1897 for Antarctica in the Belgica, a converted Norwegian whaling ship. He and his crew passed by Graham Land in January 1898, naming the waters between the Island and an archipelago to the west Belgica Strait - later renamed Gerlache Strait in the captain's honour, and crossed the Antarctic Circle on 15th February 1898. By the end of the month, however, the boat had become trapped in the ice off Peter Island, forcing de Gerlache and his companions to spend the winter there. From mid-May to late July they experienced total darkness, and there followed another 7 months of intense hardship as they attempted to free the ship from their frozen surrounds. Finally, a full year later, in mid-February 1899 they cleared a channel, and by mid-March were ice free. The expedition returned to Antwerp on 5 November 1899. In 1901 de Gerlache published a book on the expedition: Quinze Mois dans l'Antarctique.
Thence by descent to the present owner, grandson of the above

Painted in Peïra-Cava in the Alpes Maritimes, Provence. Peïra-Cava was the region's first and most fashionable ski resort in the early 1900s. The village is dominated by the eponymous peak (altitude 1,582m), which offers panoramic views stretching across the Mediterranean, as far as Corsica on a clear day. After the First World War, when Van Rysselberghe was attracted to the site, the resort was at its apogee and boasted at least three hotels. There were even ambitious plans to link it by cable car to Nice.

Van Rysselberghe had been a colourist ever since his first trip to Morocco in 1882 aged 20. Two more trips to North Africa that decade followed, and the results are evident in the gradual opening up of his palette and the light that began to suffuse his compositions. But his truly damascene moment came in the the spring of 1886, when he was transfixed by Georges Seurat's largest and most audacious work La Grande Jatte at the 8th and last Impressionist exhibition in Paris (collection of the Art Institute of Chicago). He convinced the Frenchman to show the painting the following year in Brussels with Les XX, the avantgarde group of artists and designers he had co-founded three years earlier. Although the painting met with scepticism and derision from the Belgian press and public, Van Rysselberghe became one of Seurat's several acolytes and a chief exponent of Neo-Impressionism, developing his own version of the style over the years to come.

Another such admirer of Seurat was the painter Henri Edmond Cross. Van Rysselberghe and Cross became close friends, and it was Cross who persuaded Van Rysselberghe whilst on a bicycling trip together to relocate to live in St Clair, near Le Lavandou on the Côte d'Azur where Cross was already a resident. With the move, Van Rysselberghe's close adherence to a pure pointillist technique mellowed, and his palette absorbed the distinctive, warm and sublimely variegated hues of the Mediterranean. His brother, the architect Octave Van Rysselberghe designed and built him a house and studio there, into which Van Rysselberghe moved in 1911, and where he lived for the next fifteen years. Out of season Peïra-Cava, north of Nice and Monaco provided a welcome retreat for Van Rysselberghe, lying some two to three hours drive by car east of St Clair.