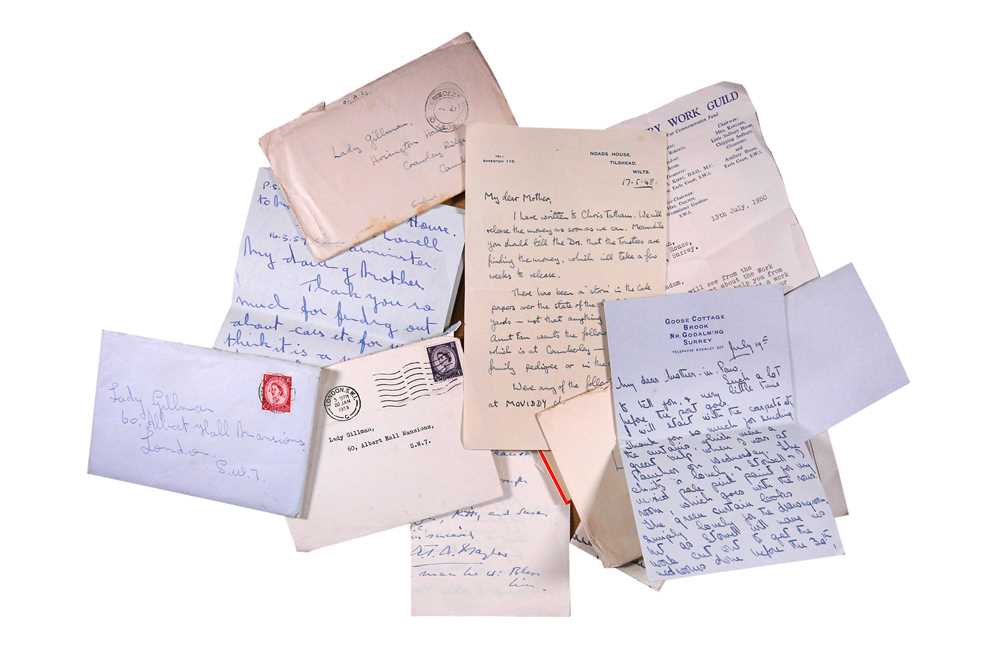 A large collection of letters relating to the Webb Gillman family, mostly addressed to Lady Gillman from her son Herbert Charles, dating from WW2 through to the 1950’s. They cover financial difficulties and concerns with their home and estate, giving insight into their lives, general day to day welfare and a fascinating snippet of social history. One letter to Lady Gillman from her son reads in part “I will send the voting paper for the British Horse Society with mine, but as you have not signed it, I return it with Xs marked on it… Servants are not easy to find here - one has to wait until a good one comes free, and suffer from indifferent ones meanwhile…” signed “H.C.”, 2 pages, 10 Field Regiment, Royal Artillery stationary, mailing folds, 10h February, 1954; another reads in part “We only got back from John’s on Sunday so I could not write you till Monday. We had great fun there and had a most amusing shoot on Friday. I learnt to drive John’s tractor and was able take Mac everywhere the guns went as the tractor had a small trailer behind it which you raise right off the ground.”, two pages, mailing folds, 13 October 1948; another reads in part “We will release the money as soon as we can. But you must realise that this is not done with a waive of a wand! I will ask Humphrey Jawatt to advance us a little when he gets the share certificates. But as you know, even after a stockbroker gets his orders and the share certificates he has to sell them: following which one has to wait until the next settling day, when monies are paid in.”, two pages, mailing fold, 24 May, 1948; another reads in part “I cannot quite make out what Minnie Cowley is up to. Of course, she is after money, clearly. But why she should suddenly begin querying the estate now I would give much to know. There's nothing to worry about - save that is it most annoying to have the solicitors letters. The only matter over which she might have an inkling of a case is the albert hall box. Did she ever go there? - it would be useful to know what its value was before the war, so that if necessary it could be shown as offsetting part of your outgoings.”, two pages, mailing folds, Tilshead, 3 February, 1949; and many others, v.s.; also including correspondence between Mr and Mrs Beer from Roundlay, Leeds, and their three sons. An early one from Anthony W. Beer, reads in part “Yesterday was an awful day. From about 11am it poured and we had a gale, I should think, torrential rain and a terribly high wind. But this morning is it very fine and sunny. We had the 2 minutes silence yesterday at 11 o’clock. It is the Common Entrance today and tomorrow…”, autograph letter signed, two pages, 4to, Lancing College, Sussex, Tuesday November 12th; another from Micheal reads in part “...I’ve just been to Moor Monkton Church. We had a lantern slide on Thursday about Jerusalem. It is very fine here. We play football at 12 o’clock every day and on Wednesdays and Saturdays when we play in the afternoon”, three pages, mailing folds, 8vo, Red House School, York, 5 October, 1930; with a letter to Anthony Beer, regarding his M.A. at Hertford College, form the bursar Mr W.L. Ferrar, reads in part “An M.A. is an expensive degree. I can still recall my own [?] when I took my own M.A. It has always seemed to me not worth a man’s while if he has but little money, to take the degree unless he moves in academic circles - when it definitely is worth while… The College struggles along on was + another. The drop in tuition fees, degree fees and payments of terminal dues has been understandable: many men find the payment of dues, which they are quite willing to pay if only as a gesture to their college in times of peace, a burden that must be dropped in war time.” two pages, mailing folds, 4to, Hertford College, Oxford, 31st august 1941; another from John Swifty “I am very sorry to announce that, your friend 2nd LT John Sucheki was killed in action, the 16th August 1944 in Jort (Normandy).”, one page, mailing folds, 8vo, Polish Forces, December 16th 1944; and a quantity of others (c. 500).