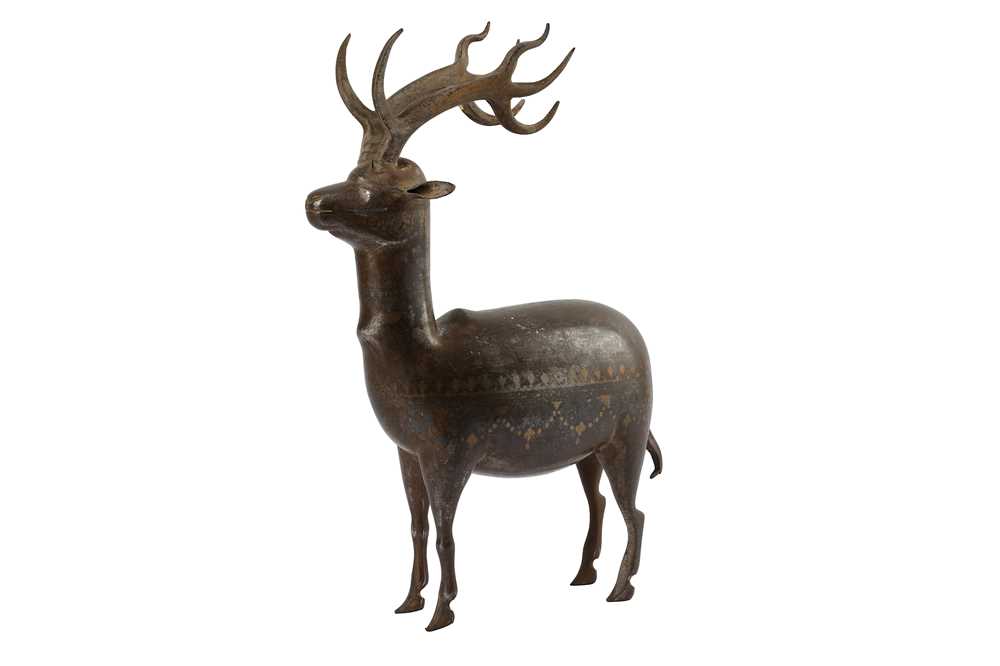 Resembling a deer, large in stature with impressive long antlers, decorated with gold-damascened floral and geometric bands spanning the circumference of the body and floral arabesque motifs to the chest and spine, further decorative bands to the neck and tail, floral scrolls to the cheeks, the nostrils, long ears and mouth naturalistically rendered, 24cm x 35cm.

One of the Qajar period’s most beloved creations in steel is the production of gold-damascened bird-shaped and zoomorphic statuettes. From peacocks, doves, and ducks to deer, camels, elephants, cats, lambs and buraqs, the zoomorphic artistic vocabulary knew no limits (A. Collinet, in L’Empire des Roses: Chefs-d’oeuvre de l’Art Persan du XIX siècle, Louvre-Lens, 2018, p. 92). Some examples may show naïve and stylised features, but the vast majority surprises the beholder with enhanced naturalism and dynamism, with an unexpected understanding of the represented animals’ bodies.

According to Collinet, the primary use and purpose of these zoomorphic sculptures was to decorate and embellish the ‘alams (devotional standards) used during important ceremonies and processions, the most important planned for the month of Muharram commemorating Hussain’s martyrdom in Kerbela (ibidem, pp. 92-93). The choice of animals thus is far from casual and it takes a completely different allegorical significance in the minds and eyes of Shi’a believers: the camel becomes a symbol of the Prophet; the lion of the Prophet’s cousin and first Shi’a Imam, ‘Ali; the peacock of the Mahdi, the last Imam who entered the state of ghayba (occultation); and the deer of the Eighth Imam, Reza, the Imam-e Zaamin (The Guarantor), a title connected to the time the Imam acted as guarantor of a deer about to be hunted by a hunter, and eventually managed to set him free.