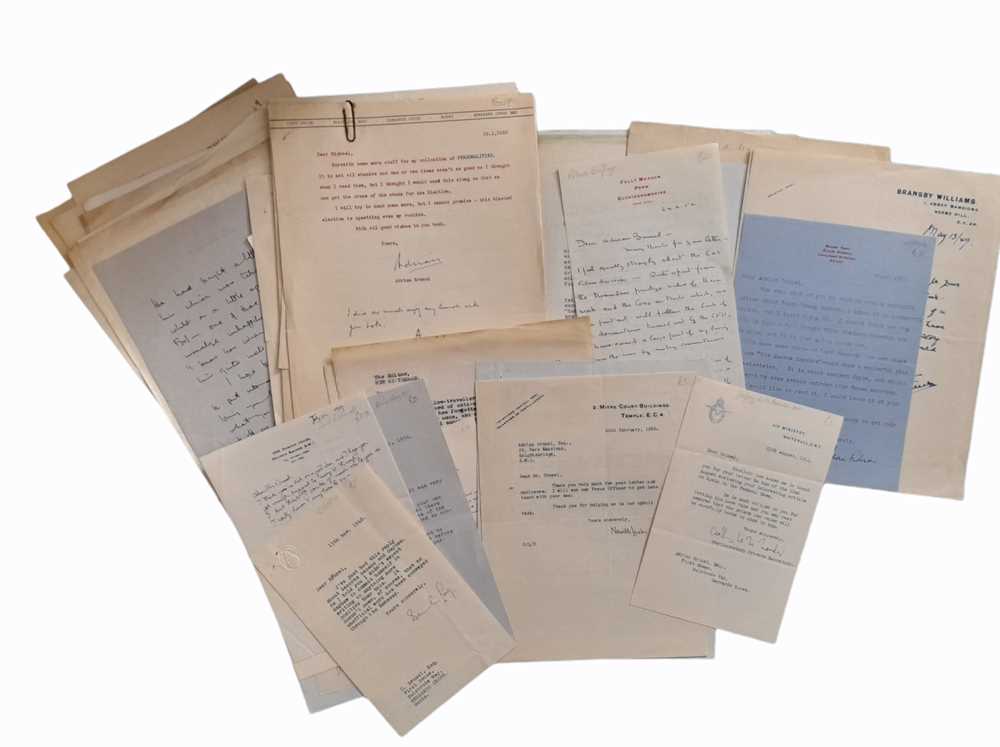 Collection of autograph and typed letters from prominent figures of the theatre and politics, addresses either to Adrian Brunel or his son Christopher, including: Flora Robson (letter to Adrian, saying in part "How very kind of you to send me such a wonderful letter about 'Sorry Wrong Number', I think it is a masterly script, and I loved doing it. I cannot think how they mad eit into a full length film, Barbara Stanwick was the star", one page, 17 March, n.y.); Aneurin Bevan (letter thanking Adrian for the invitation to see 'Waifs that Stray', one page, 2 April 1947); Michael Foot (typed note to Christopher, one page, 5 June 1951); Philip Noel Baker (typed letter to Christopher, reading in part "I quite agree that there are great dangers of Runcimanism and of retreat from the new policy. Indeed, I think it very likely that the Government will not have got far with the present policy before they find it essential to get rid of Chamberlain, Simon and Hoare"), one page, 4 April 1932; Bransby Williams (autograph note to Adrain, saying in part "I do hope you have great success with such a sweet story", one page, 13 May 1949); Archibald Sinclair (typed letter to Adrian, mostly discussing about Churchill "I rate him much higher than you do. We can agree that he was a good leader in war - probably the best in our history - but remember also that he was in the forefront of our struggle against appeasement and Munich before the war and a stalwart supporter of the League of Nations. Naturally I regret that he ever accepted the leadership of the Tory Party after Neville Chamberlain's death. I believe that his position after the war would have been overwhelmingly strong if he had not been tied to the Tory caucus", two pages, 12 March 1948); Bruce Belfrage (autograph letter saying "I feel equally strongly about the COI Film Division. Quite apart from the tremendous prestige and value of their work and the loss in trade which...will follow the launch of the documentaries turned out by the CFU, I have earned a large part of my living since the war by making commentaries for them!", two pages, 24 February 1952); Edward McKnight Kauffer (two autograph notes, 1925 and 1930); Ronald Bell; Leslie Hale; Jameson Thomas (autograph note thanking Adrian for "your great kindness and consideration to me during the filming of 'Blightly' but above all that for your friendship. I value that most of all", two pages, n.d.); Godfrey Winn; Victor Gollancz (typed letter to Christopher, saying the Left Book Club has experienced some issues in the distribution of certain pamphlets, two pages, 14 December 1938) and others; also including carbon copies of letters from Adrian to Michael Foot; v.s. c. 1925-1952 (quantity)