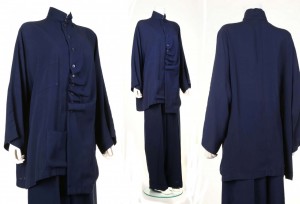 For most, the 1980s do not conjure up images of great style and design. Whilst it’s true that shoulder pads, ra-ra skirts, Lycra, perms and leg warmers may have been the prevalent fashions to many, there were actually a number of fashion designers working to combat the excess of the decade and previous decades and to create a new, wearable aesthetic.

Young Japanese designers such as Issey Miyake, Yohji Yamamoto and Rei Kawakubo at Commes de Garcons had recently come to Europe and were working hard to push the boundaries of the fashion. By using interesting materials and a looser, more androgynous style, these designers really changed the fashion landscape in the 1980s. Regarding fashion as an art form, the fashion shows became a spectacle of modern art.

There are a number of 1980s outfits from these revolutionary designers in the upcoming sale. Lot 71 a deconstructed blue trouser suit by Yohji Yamamoto, beautifully demonstrates the designer’s flair for tailoring in a less structured manner. The flowing lines compliment the body without restricting it, turning the wearing into a walking artwork.

Many pieces from these fashion artistes do not have a clear way of being worn, such as lot 77B, an Issey Miyake pleated outfit. Whilst the top is fairly straightforward, the attached flowing material could be worn as a cape, a tail, or even a cross-over skirt, however the wearer deemed fit.

European designers, such as Azzedine Alaia, were also changing the rules around fashion in the early 1980s. Whereas most designers were adding layers and flounces to their designs, Alaia
started with the actual body, hugging curves and complimenting the slim and sporty body that were in vogue. Shunning patterns and colours, some of Alaia’s most iconic pieces are his simple knitted dresses such as lot 83 or lot 87.

There are many, many other pieces from this incredible decade in the sale, and I could write about it all day long! I’ll leave it there for now, but do check out the catalogue for further, amazing, 1980s outfits and enjoy a fashion flashback!