In July we were delighted to be offer a group of nine very rare early pieces by the German Jewish refugee artist Hans Feibusch in our Modern & Post-War British Art sale. The group included recollections of his early experience in war-torn London, intimate drawing compositions, studies for larger projects and a beautiful view of his studio.

To stand before an empty wall as in a trance… to let shapes cloudily emerge, to draw scenes and figures, to let light and dark rush out of the surface, to make them move outward or recede into the depths, this was bliss.
Hans Feibusch on mural painting

Lot 63: Hans Feibusch, Study for Britain Can Make It. Sold for £1,250 including Buyer's Premium.

Hans Feibusch arrived in Britain in 1933 fleeing the Nazi regime becoming part of a group of emigre artists who would have a huge impact on the course of British Art. Throughout his life, Feibusch made a major artistic contribution to the reconstruction of post-war Britain through his extraordinary series of mural paintings. Among them is the Altarpiece at St John’s Church, Waterloo – a stunning representation of Christ on the cross and The Adoration of the Shepherds, commissioned for the church’s re-opening as the Festival of Britain church in 1951. All proceeds from this sale of lots 61-69 in our July auction went towards the restoration of this stunning piece of British heritage. 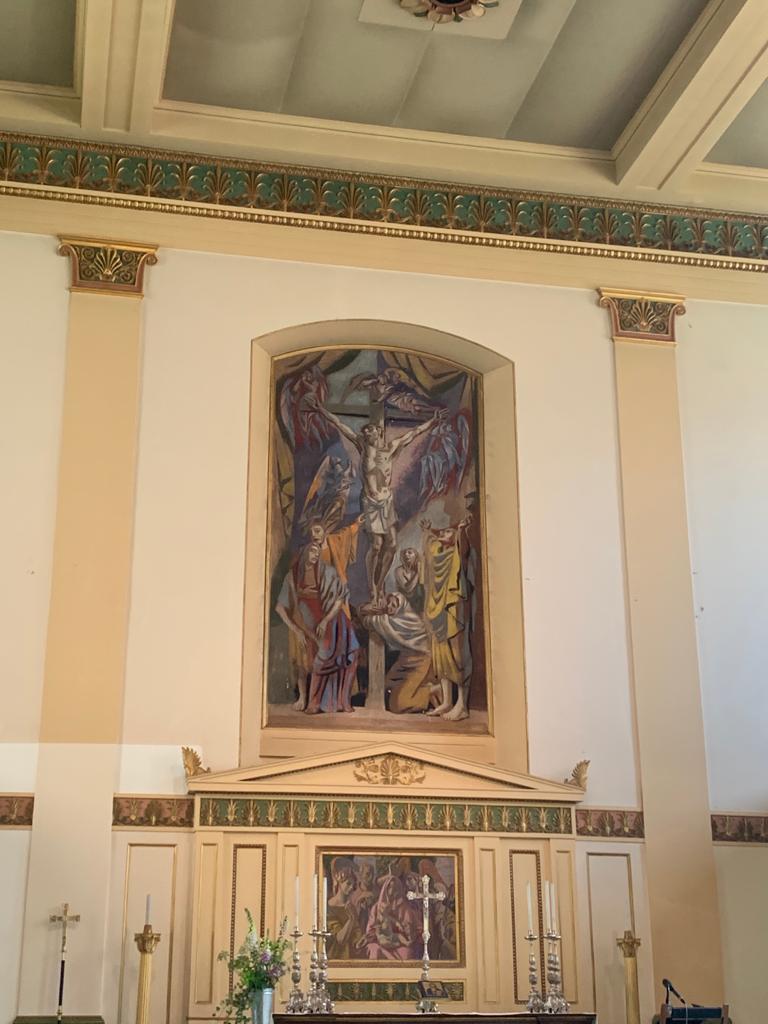 In London, Feibusch worked in the Studio of Sir Edwin Landseer (1802-1873) at St. John's Wood and painted a beautiful view of the rooftops around.

Lot 66: Hans Feibusch, View from the studio. Sold for £1625, including Buyer's Premium.

Feibusch’s output can be separated into three main themes: nature, mythology and religion.  The persecution he experienced as a Jew in Nazi Germany brought religion to the forefront of his identity. A huge proportion of Jewish artists left Germany in 1933 and 1934 just after Hitler’s appointment as German Chancellor when the policy of banning the display of ‘degenerate art’ began.  Feibusch was one such artist who fell afoul of this artistic discrimination, along with the work of Chagall, Kandinsky, Klee, and Kokoschka with his work being reviled, banned and eventually destroyed by the Nazis.

Once in London, he was welcomed into the London Group, among artists such as David Bomberg, Henri-Gaudier-Brzeska, Jacob Epstein and Harold Gilman. It was through a member of the group, the architect E. Maxwell Fry that Hans got his first commission in Britain Foortwashing 1938 for the Methodist Chapel at Colliers Wood. During the war the artist painted predominantly in oil and gouache and his contribution as a muralist would start after during the efforts to recover from the bombings. Bomb damage near St Paul’s, (lot 64, which sold for £625, including Buyer's Premium)  from 1941 is an intimate reflection of Feibusch’s wartime experience in London.

In the 1930s and 1940s the British art scene was dominated primarily by Abstraction and Social Realism.  These were a reaction to the prevailing insecurity and inhumanity in Europe. Herbert Read saw abstract art as a ‘search for formal harmony’, while Social Realism represented a ‘desire to express the chaos itself’. Feibusch instead turned to the religious subject matter, exhibiting a search for spiritual guidance.  Feibusch did not turn to the Jewish religion; he became and remained a Christian for nearly twenty years. However, in 1992 he formally left the Church of England, finding it no longer possible to believe in the Holy Trinity. From then until his death he chose not to belong to any denomination, although nearing the end of his life he started looking back towards Judaism.  Feibusch held the ‘belief that the chaos of life is only bearable with the faith of spiritual direction, irrespective of a specific religious community.’ (D. Coke, Hans Feibusch: The Heat of Vision, p.11).  One can imagine that after a life torn apart by religious segregation and discrimination, he might have preferred an inclusive approach to spirituality rather than focusing on one specific religious community. 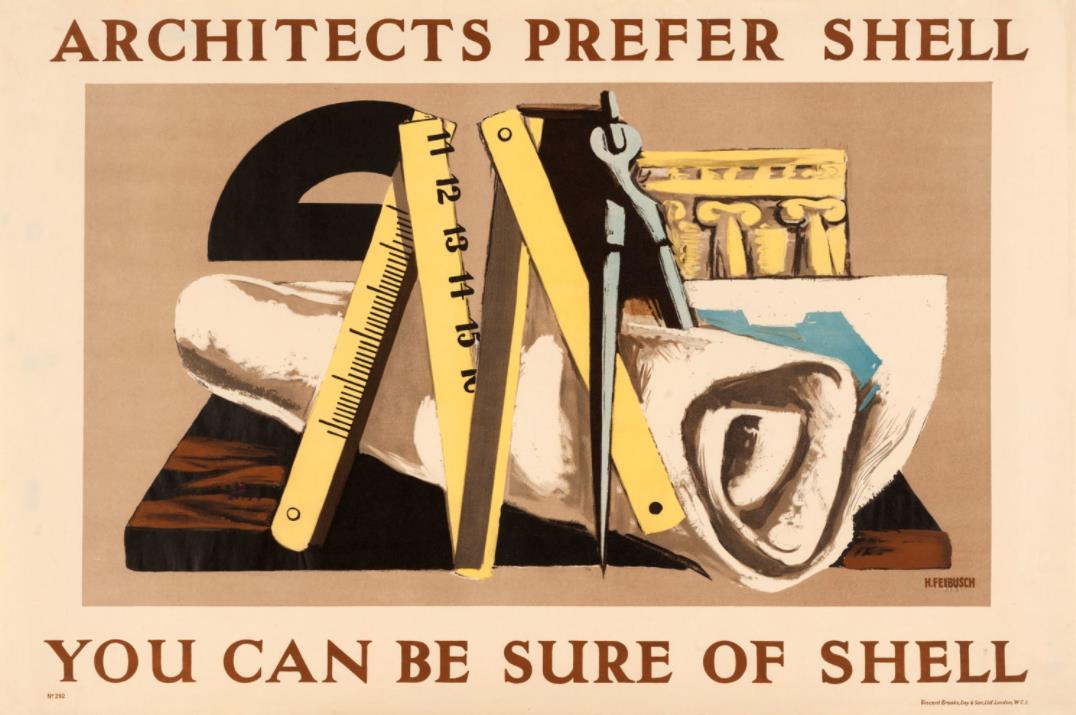 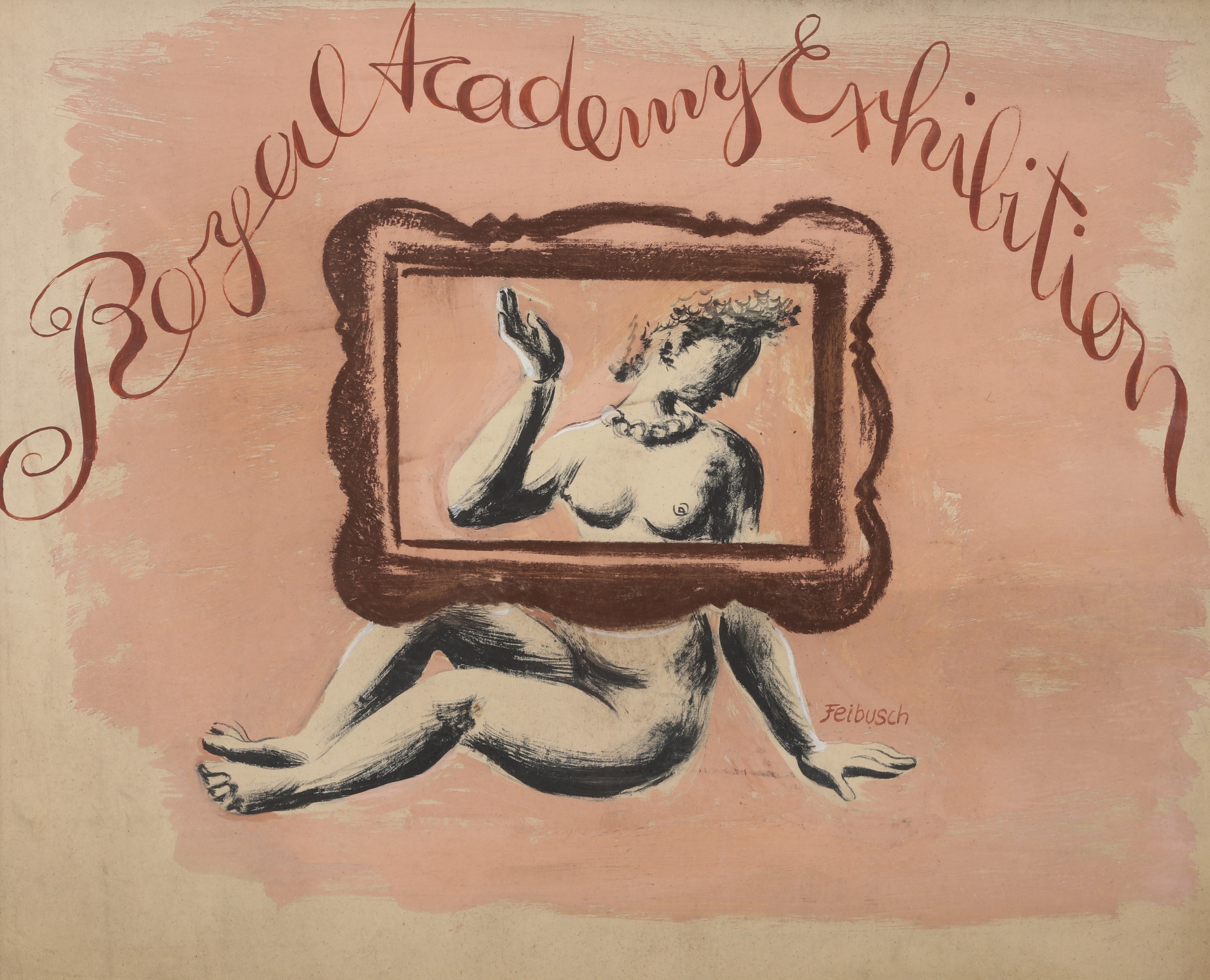 In the 1930s Feibusch was among the leading modernist artists to be  commissioned to create designs for posters for Shell, the London Underground and the Royal Academy. In this he was in the company of Paul Nash, McKnight Kauffer, John Piper, Graham Sutherland, Ben Nicholson, Cedric Morris and many others. The original of Architects prefer Shell is held at the London Transport Museum. 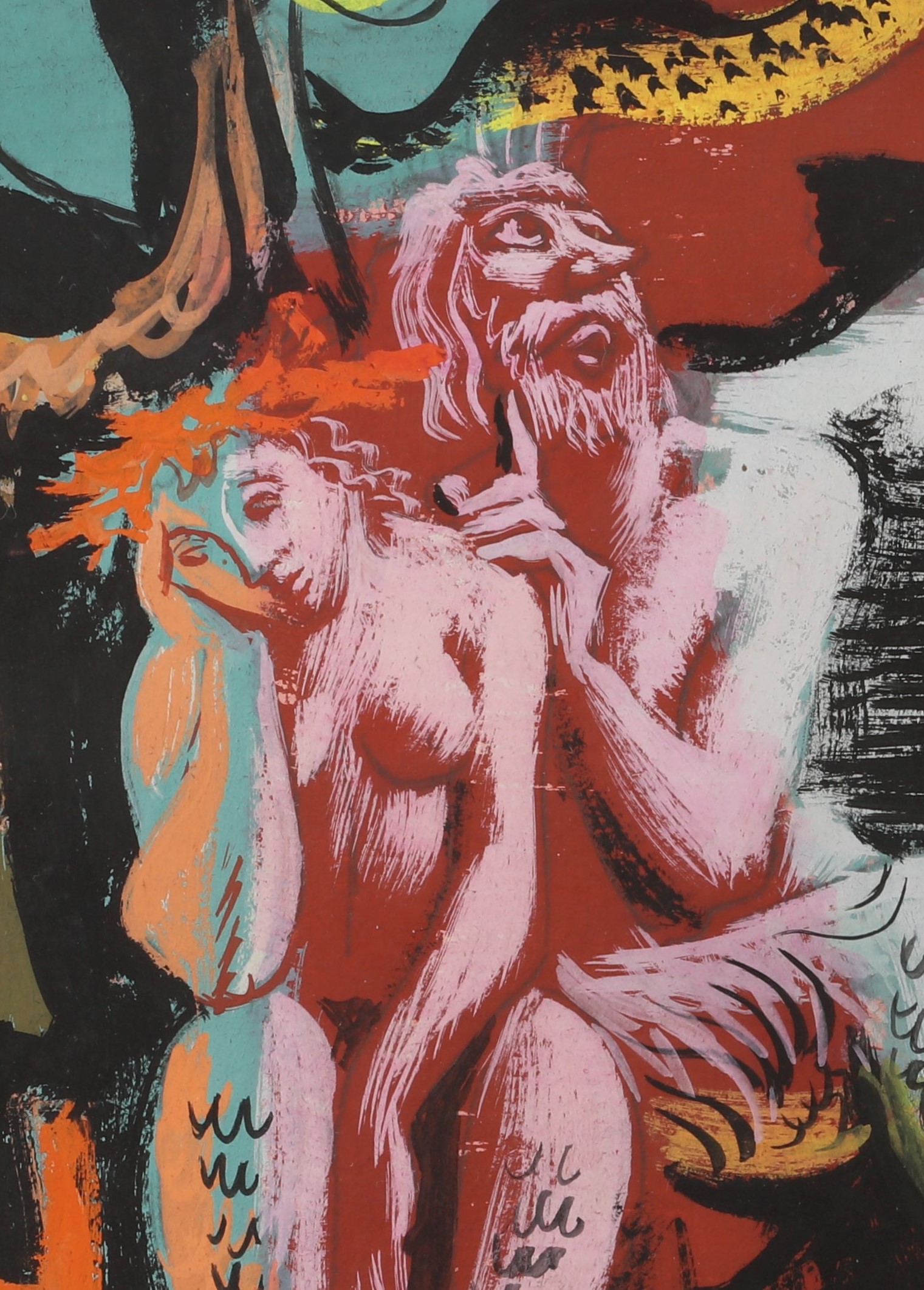 Known as the artist of the glowing palette, ‘Feibusch was first and foremost a colourist’ (D. Coke, p.31).  His colours express the emotions of not only the artist and his persecution but also the ones of the figures he depicts within his compositions.  Feibusch can be seen to have been heavily influenced by the Fauvists, who were known for their courageous use of colour.  When looking at their works, Feibusch comments that The Fauves ‘were not satisfied with a surface luminosity and iridescence but aimed at the expression of their emotions’ (H. Feibusch, Mural Painting, p.44) and notes their use of ‘the new colours which they deepened and enriched.’ (H. Feibusch, p.44) 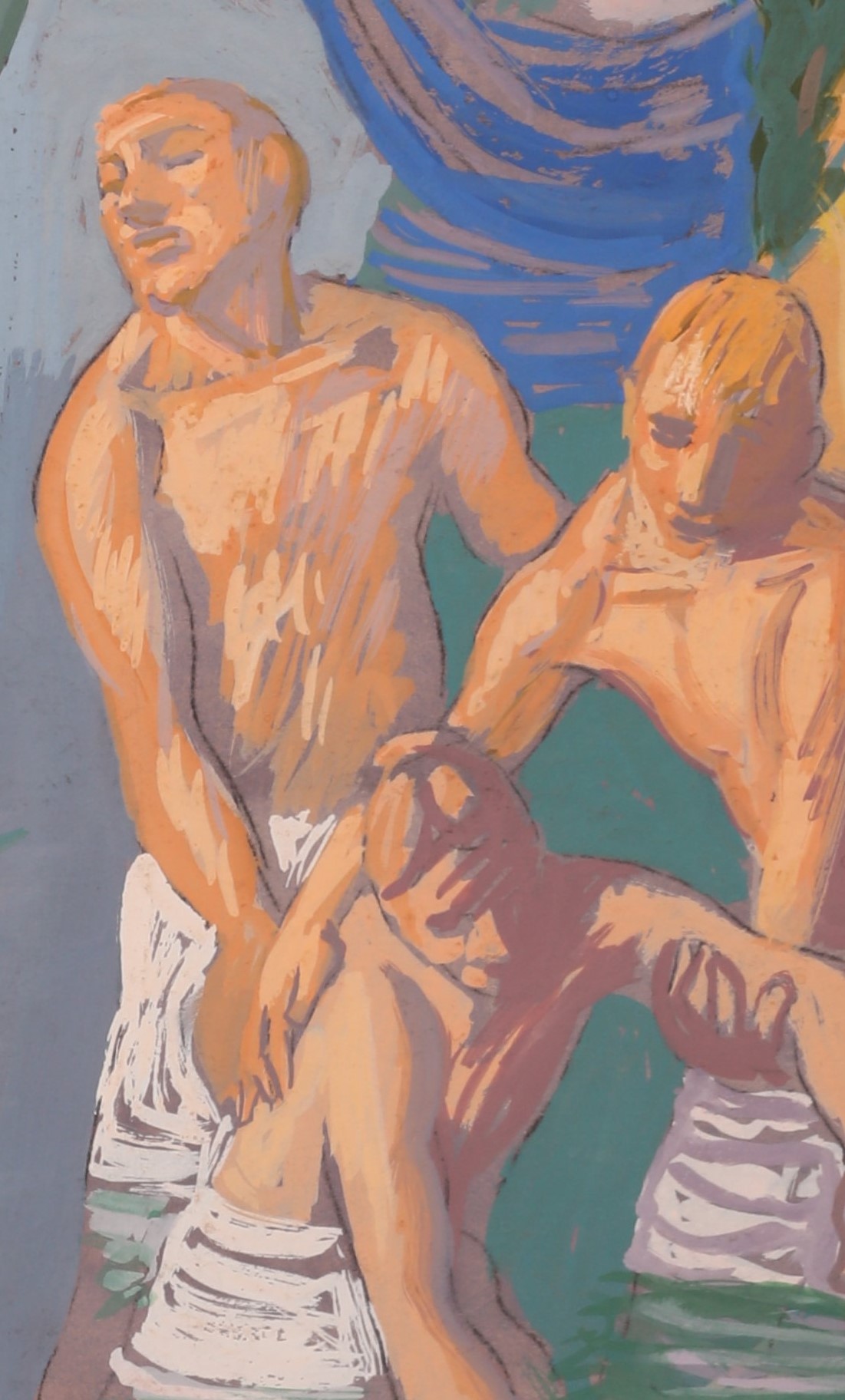 The use of contrasting yellows and greens and purples and blues in St John the Baptist (lot 62, which sold for £1,500 including Buyer's Premium) is an example of how Feibusch used colour as a vehicle to not only delineate the composition but also to depict three-dimensionality to the forms and figures he portrayed.  He found great interest and inspiration in the Fauvists prioritisation of the colour over the composition, ‘They reduced the forms of nature to great simplicity, using often an outline only, and gave themselves up to a cult of glowing, intense colour, not shrinking from harsh and brutal effects.’ (H. Feibusch, p.44) The use of bright colours to create an almost sculptural feeling of three-dimensionality can be seen in Hans' early drawings from the 1930s Apollo and Daphne (Lot 65, which sold for £1,500 including Buyer's Premium. ) and Two wolves (Lot 67, which sold for £625).

After the end of the war, Britain was facing difficult socio-economic challenges. As a response, the government-backed an exhibition called ‘Britain Can Make It’ which took place at the V & A for fourteen weeks in the autumn of 1946. The aim was to bolster Britain’s manufacturing industry by presenting modern forward-looking and high-quality designs. Feibusch was commissioned to create a mural for the Tea Pavilion, his selection for the commission being a true testament to his deep integration into the lively world of British art. His design for it (lot 63, which sold for £1,250 including Buyer's Premium) is taking inspiration from the classical representations of Satyr and the three muses. His symmetrical composition and beautiful bright colours ensured the work is a great fitting for the tea pavilion setting. 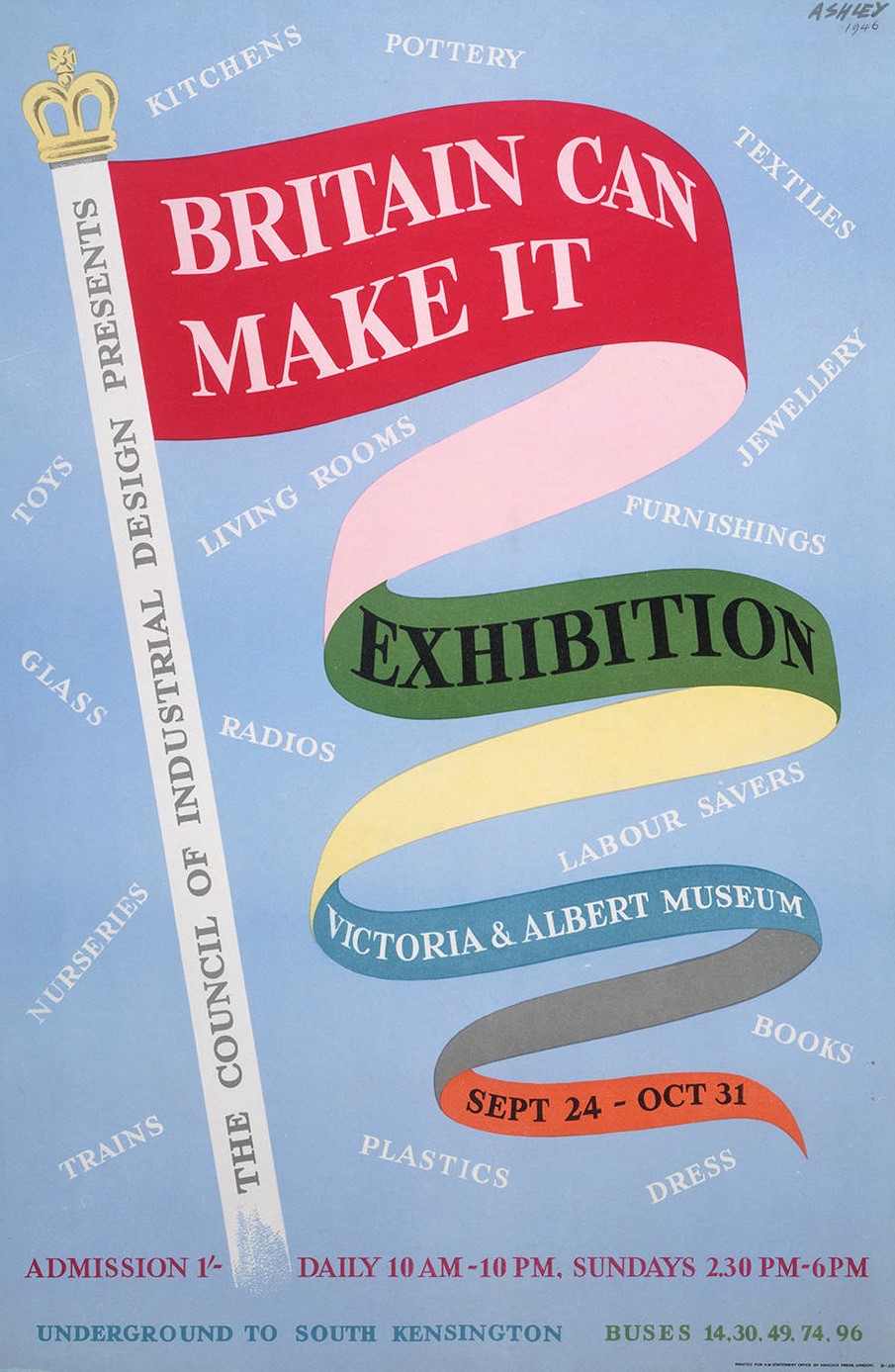 A year after the Tea pavilion Feibusch published his book on Mural paintings, where he explored and analysed the history and tradition of the art of mural painting from the past to present. His dedication to being part of the re-building of war-torn Britain can be sensed from his quote below:

We are on the outset of a new building era; tremendous tasks are to be undertaken, and we have by lucky coincidence or providence, a new and vigorous architecture to tackle them. At the same time, the interest in mural painting is reviving amongst architects, painters and the public; the hopes for a great art to rise up again are higher than they have been for the last 150 years.

With his particularly high technical competence, bold use of colour, rhythmic compositions and zeal for greatness, Feibusch completed around forty murals in churches, cathedrals, synagogues and public buildings, which remain some of the most outstanding modern murals in British history. His particular style was beautifully described by David Coke in his essay on Feibusch as a Colourist:

..lyrical episodes, vivacious rhythms striking a balance between light music and jazz, and on simplified harmonies of harsh forcefulness rather than on the pyrotechnics of the Straussian orchestra..

The beautiful group was offered in our July Modern & Post-War British Art sale (Lots 61-69) and included early examples from the first three decades of the Feibusch's life in Britain. An artist who yearns for wider recognition as one of the finest muralists to have ever worked in the country.

Lot 63: Hans Feibusch, Study for Britain Can Make It, detail from the reverse. Sold for £1,250 including Buyer's Premium