In Death Lamented As in Life Belov’d

Mourning Jewellery of the eighteenth and nineteenth centuries

Mortality is a theme which has been explored across art forms for millennia. Beginning in the Medieval period, forms of memento mori (from the Latin meaning ‘remember that you must die’) were utilised across Christian art to emphasise the emptiness and fleetingness of life and its earthly pleasures. Enamelled skulls and other macabre symbols featured on memento mori rings of the sixteenth and seventeenth centuries, often accompanied by an inscription, such as ‘Behold the Ende’, reminding its wearer of the brevity of life. During the Interregnum (1649-1660), there was a vogue amongst Royalist supporters for memorial jewellery, often adorned with an inscription or image in commemoration of their dead King, however it wasn’t until the reign of Charles II (1660-1685) that mourning jewellery as a mode of publicly commemorating a deceased individual and expressing one’s grief truly emerged.


During the eighteenth century, mourning jewellery was to become a firmly established tradition in Britain. It became a common practice amongst the upper-classes, that provision would be made in one’s will for family members to commission such pieces. Whilst early examples of mourning jewellery often feature morbid symbols of death, such as skeletons, skulls and coffins, by the 1750s these had become less common and were instead replaced by images of lamentation and sorrow, which reflected the sentimentality and romanticism of the age. Neo-Classical imagery, such as urns, columns and grieving maidens were often painted on vellum or ivory and incorporated into such jewels. Although their meaning is perhaps not as evident to us today, each of the motifs and symbols deployed in mourning jewellery served an allegorical purpose. Motifs such as a broken column (life cut short), a weeping willow (sorrow), or an anchor (hope), would have been immediately identifiable to an eighteenth-century viewer. The mounts often communicated additional sentiments – seed pearls signified tears, black enamel was used to denote a married person, whilst white enamel was reserved for children and the unmarried. Short emotive verses, such as ‘Not Lost But Gone Before’ or ‘In Death Lamented As In Life Beloved’ were another component which could be added to heighten the poignancy of such jewels. Hairwork is a further feature, which provided the wearer with a tangible keepsake of the deceased. Surviving time and decay, hair proved to be a versatile material, which could be manipulated into various decorative forms. In some cases, hair from both the deceased and the living spouse would be included, signifying their eternal union. 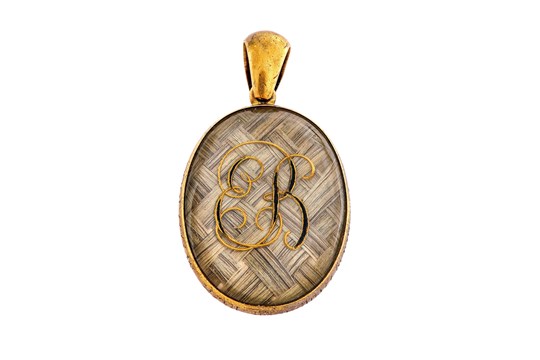 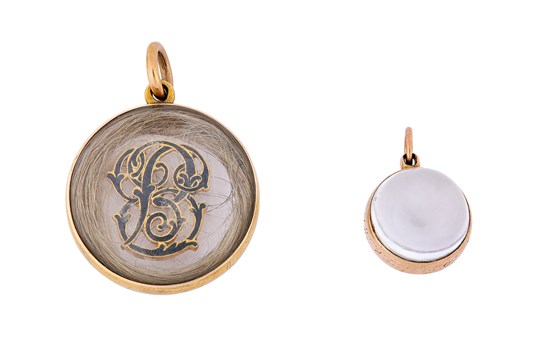 
The popularity of mourning jewellery reached its peak during the Victorian era. The death of Prince Albert in 1861, prompted Queen Victoria to enter in to a deep depression and a protracted period of mourning which endured until her death in 1901. Her subjects followed suit and the mourning industry boomed. Stringent etiquette rules dictated the wearing of black for a designated period of time after the loss of a loved one. Black enamel and hair continued to feature widely in mourning jewellery of this period. Black materials such as jet, bog-oak, vulcanite and gutta-percha could be easily carved and modelled in to a variety of forms and were enduringly popular during the latter half of the nineteenth century. After the death of Queen Victoria in 1901, there was a conscious shift to a lighter, more frivolous mentality, and the vogue for mourning jewellery dissipated, however it did make a brief resurgence following the tragic sinking of the Titanic in 1912. 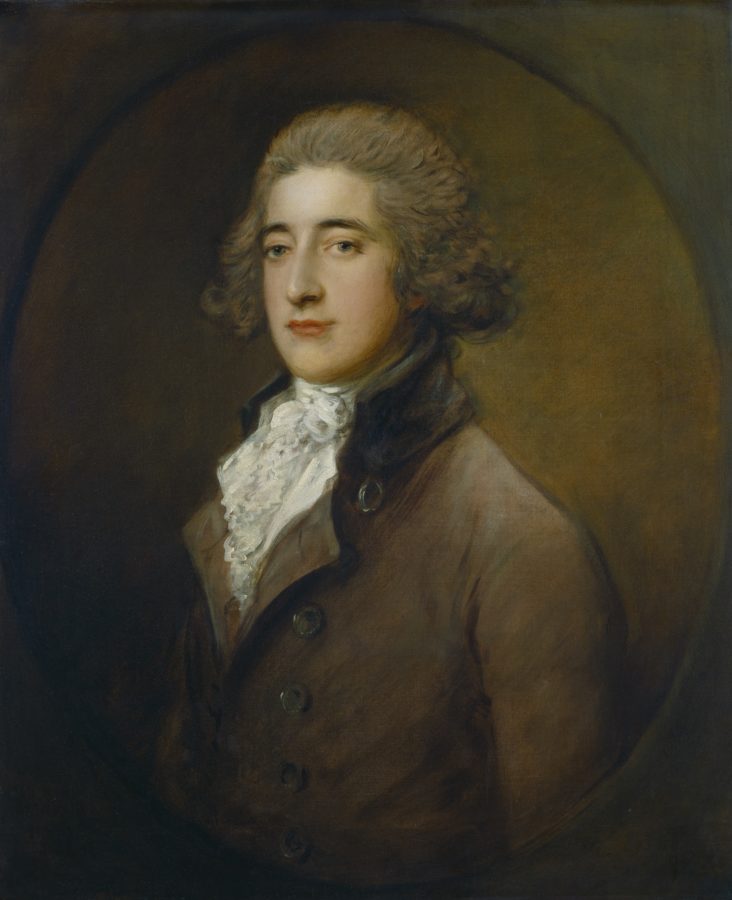 
Our forthcoming Jewellery auction, taking place on the 14th of May, includes a wonderful collection of eighteenth and nineteenth century mourning jewellery, including several pendants and lockets relating to the Bligh and Brownlow families of County Meath, Ireland. An enamel and hairwork cross pendant, circa 1810 (lot 2) is an incredibly poignant jewel, which is engraved with the names of the seven children of John Bligh, Fourth Earl of Darnley (30th June 1767 – 17th March 1831), and his wife Elizabeth Brownlow (d. 22 December 1831). The front of the cross is formed from glazed panels, each containing a lock of hair. Several of the panels are rimmed in black in remembrance of the children who did not reach adulthood.  Of the couple’s seven off-spring, only four survived, including their daughter Elizabeth (7th May 1800 – 13th November 1872). In 1833, Elizabeth married her first cousin, the Very Rev John Brownlow, who was the Vicar at Ardbraccan, County Meath and held the office of Dean of Clonmacnoise from 1862 until his death in 1882. This collection includes mourning lockets for Elizabeth Brownlow and two of her five children, Frances Mary Brownlow (17 August 1840 – 16 June 1871) and the Rev Duncan John Brownlow (4 March 1842 – 29 September 1904).

For our forthcoming 14th May Jewellery auction, Chiswick Auctions are delighted to collaborate with Nicholle Mogavero, who is an antique jewellery advisor and author of the highly successful Jewelry Nerd blog. Nicholle is passionate about mourning jewellery, and we are thrilled to present her top picks below. 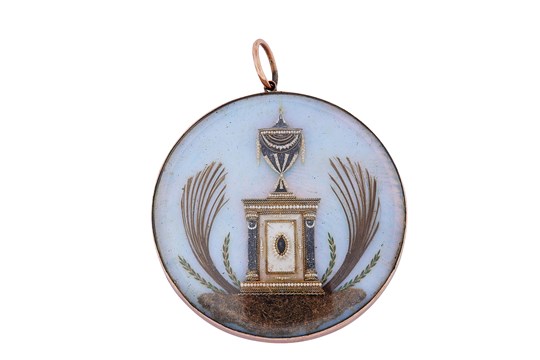 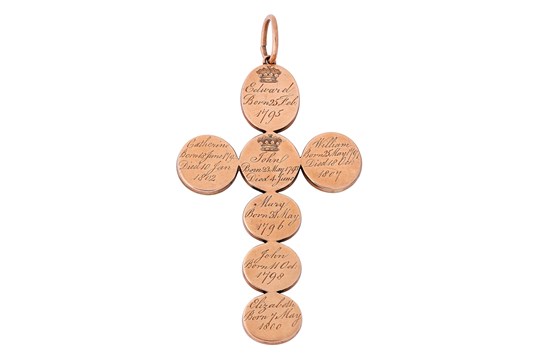 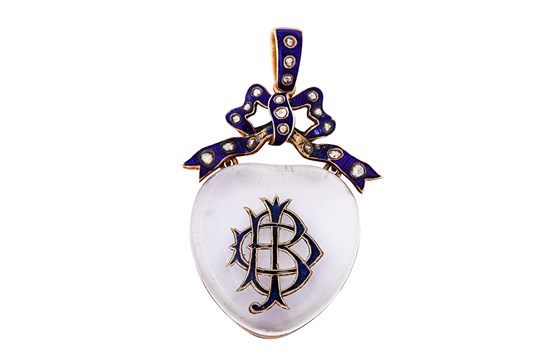 
This late 18th century doubled-sided pendant is a rare example of mourning jewellery on opalised glass. The opalised glass, with its flashes of pink evokes the hope of life after death and is a wonderful example of jewellery symbolizing the everlasting life.

My second pick would be the enamel and hairwork cross pendant. It is a genealogists’ dream come true with so many family members to research, it would provide hours of fascinating stories and would really bring the past alive!

Lot 9 is a fascinating example of how memorial jewels changed through the years and evolved in the early 20th century. The pendant incorporates common elements found in most Edwardian jewellery whilst being true to the art form, remembering the deceased through the enameled monogram and engraved borders.