To celebrate their fourth year of successful sales, our Islamic & Indian Art Department is delighted to share with you some of the top lots featured in their upcoming sale. Let us take you on a journey to distant lands and fill your house and collection with unusual and carefully-sourced pieces like the ivory court of Maharaja Ranjit Singh; with the elegance and warmth of Islamic manuscripts covered in gold illuminations and aerial views of Mecca and Medina; with rare private commissions from India and Iran, providing a special insight into the stratified and complex history of the 19th century and the relationship between East and West; and last but not least, with the kaleidoscopic variety of our ceramics coming from Iran and Ottoman Turkey all the way back to England and the British Arts and Crafts Movement with works from William Morris and William De Morgan.

Ivory figurines and models, occasionally painted, often simply engraved, were a popular creation in 19th-century India, and Delhi was a known centre of ivory carving. The subjects could be the most varied, but from the remaining visual evidence, villagers, craftsmen, members of the court, and renowned rulers seem to have been among the most popular. 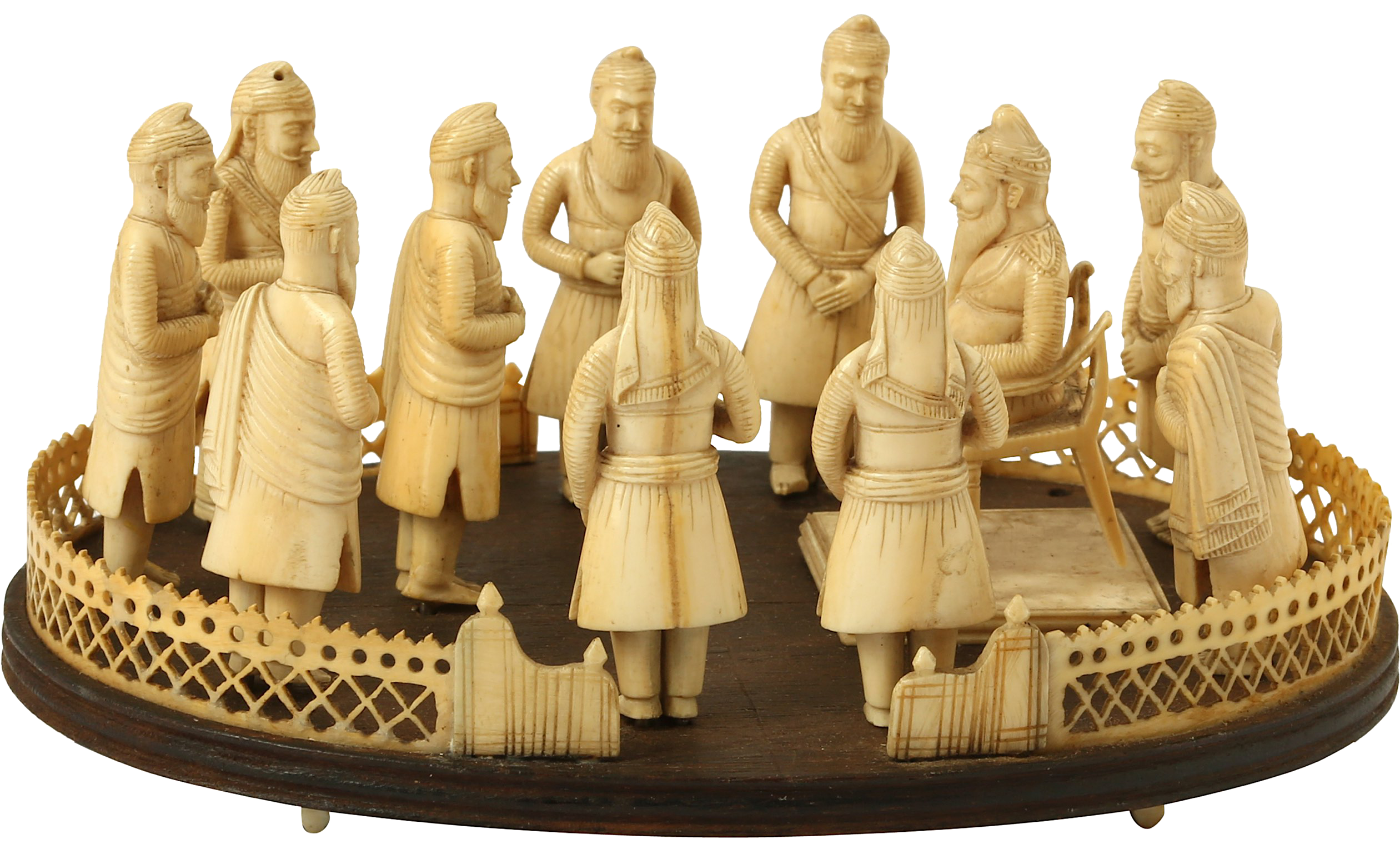 Our group of eleven ivory figurines represents a gathering at the court of Maharaja Ranjit Singh, and it is likely to have been produced in Delhi around 1830 - 1840. Our figures share a degree of similarity in terms of style, decorative technique and design with a standing ivory figurine of the first Sikh ruler in the Victoria and Albert Museum’s collection (IS.60-1998), dating to the same period. Even if Ranjit Singh was renowned for his simple dress and plain features, his ivory carvings tend to often give the Maharaja the majestic appearance and jewellery of a Mughal emperor, as evident in the bejewelled epaulettes, necklace and heavily encrusted sarpech (turban ornament) featuring in both the V&A Museum and our statuettes. Moreover, in both cases, the artist paid attention to the Maharaja’s blind left eye, a scarring mark left on the ruler by smallpox, from which he had suffered at a young age. Indeed, under a magnifying glass, one can appreciate that the left eye on both figurines has a mark next to the pupil, indicative of the ruler’s condition.

We are delighted to offer in our October auction a wide variety of manuscripts, printed books, and loose folios from the Islamic Lands. Among our highlights, we have a Maghribi Qur’an section going from Sura An-Nisa (4), v. 2 to Sura Al-An’am (6), v. 67, featuring a fine sura heading (Sura al-An'am, 6) in gold Kufic script with strapwork starburst extending into the margin. Previously sold at Sotheby’s in 2017, this Arabic manuscript on vellum comes with 51 folios of crisp sepia ink maghribi script, making it one of the largest Maghribi Qur’an sections seen in the art market in recent years. 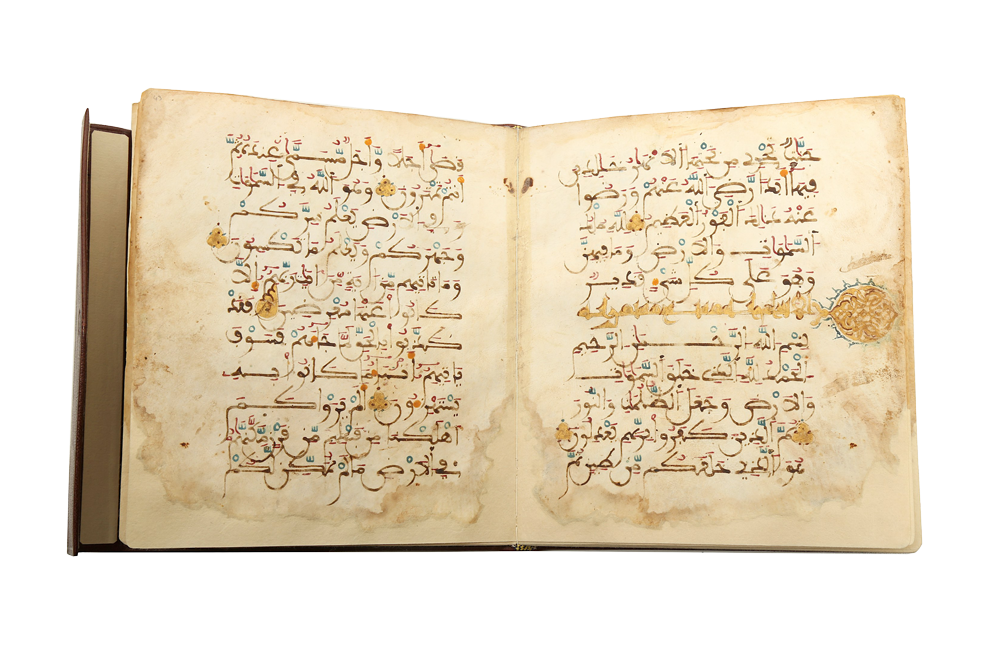 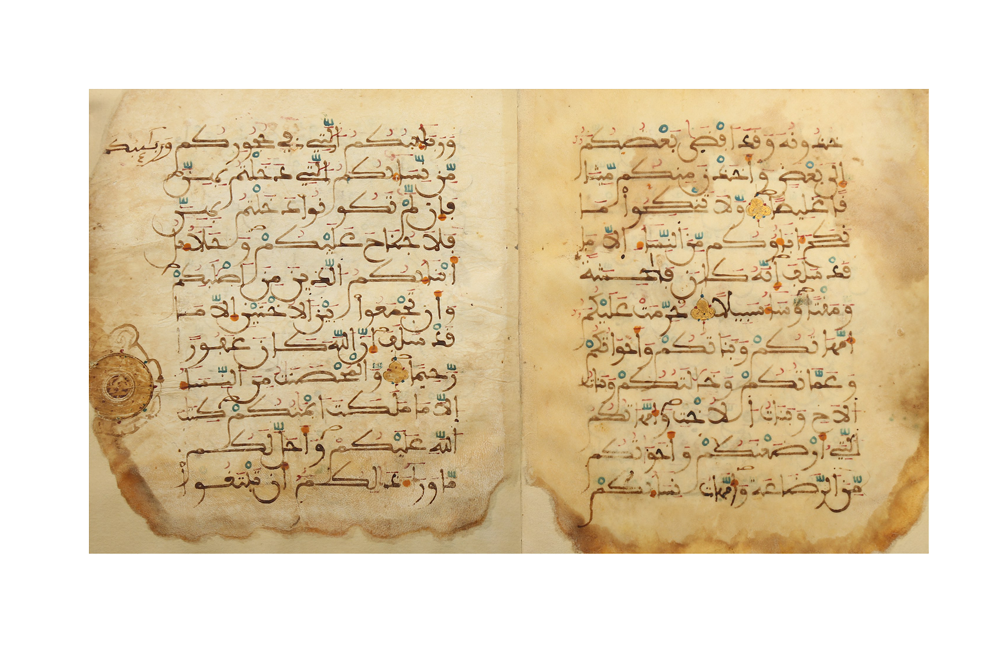 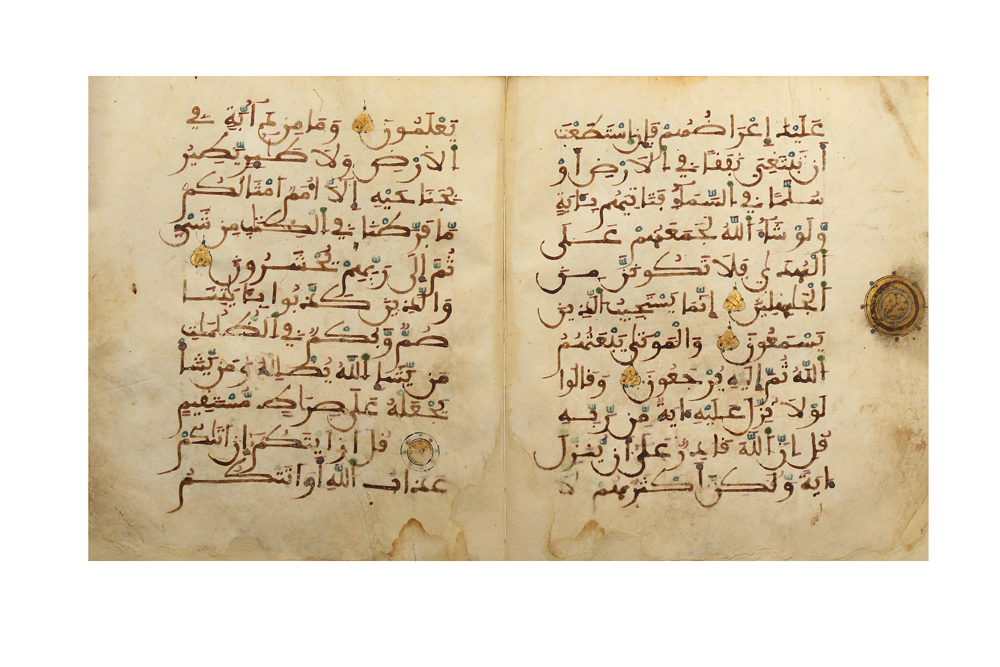 The sale also features another Moroccan manuscript, a Dala’il al-Khayrat, the opening folio with elaborate red, gold, and blue illumination and thuluth lettering in gold. But if Maghribi script is not your forte, delve into another Dala’il al-Khayrat, attributed to the Ottoman Provinces, dated 1188 AH (1774) and signed by the calligrapher Yaghub. The manuscript comes with several polychrome illuminations and a finely-painted and gilt double page with aerial views of Mecca and Medina, the holy sites of Islam, as evident on this slideshow. 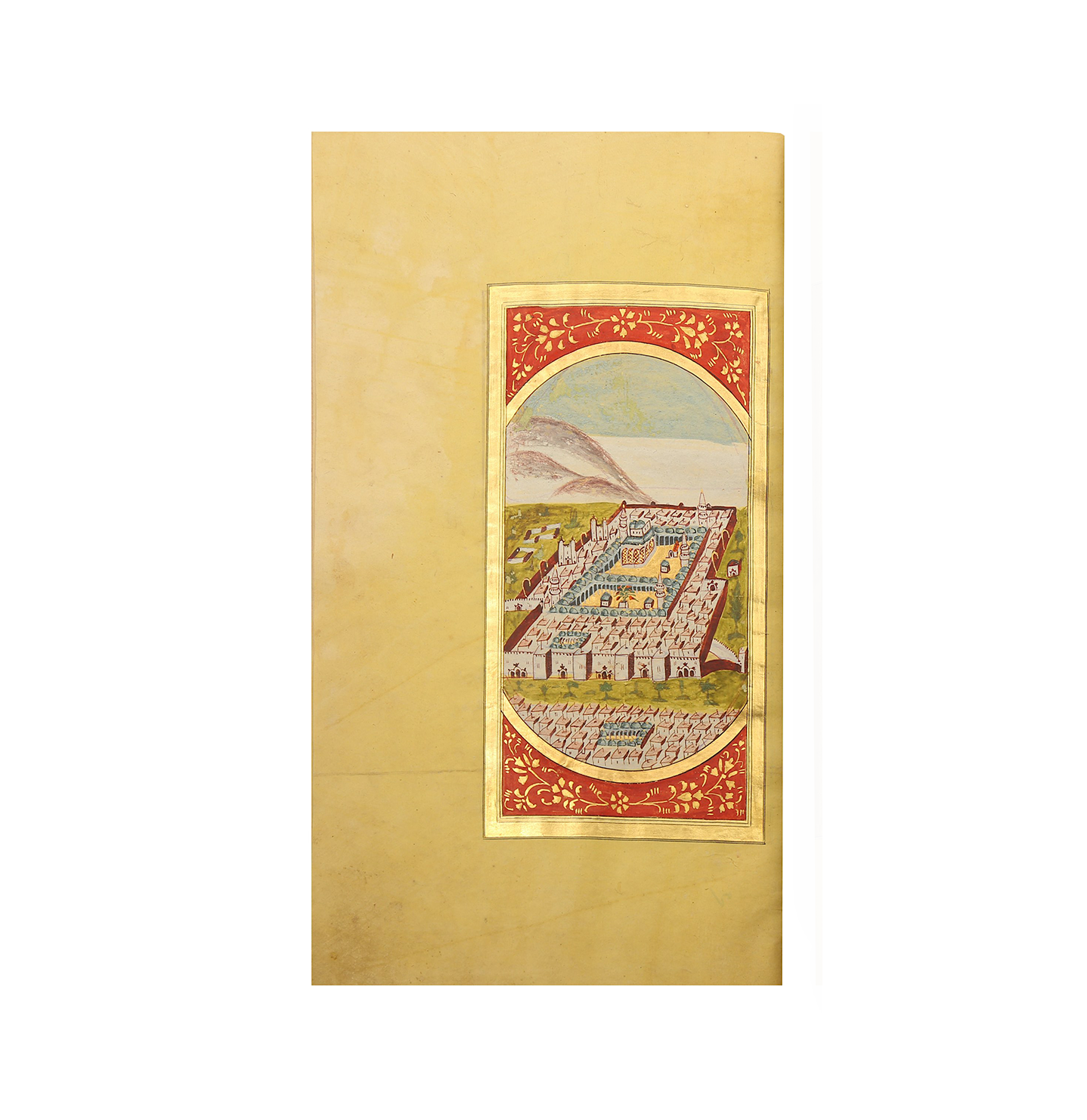 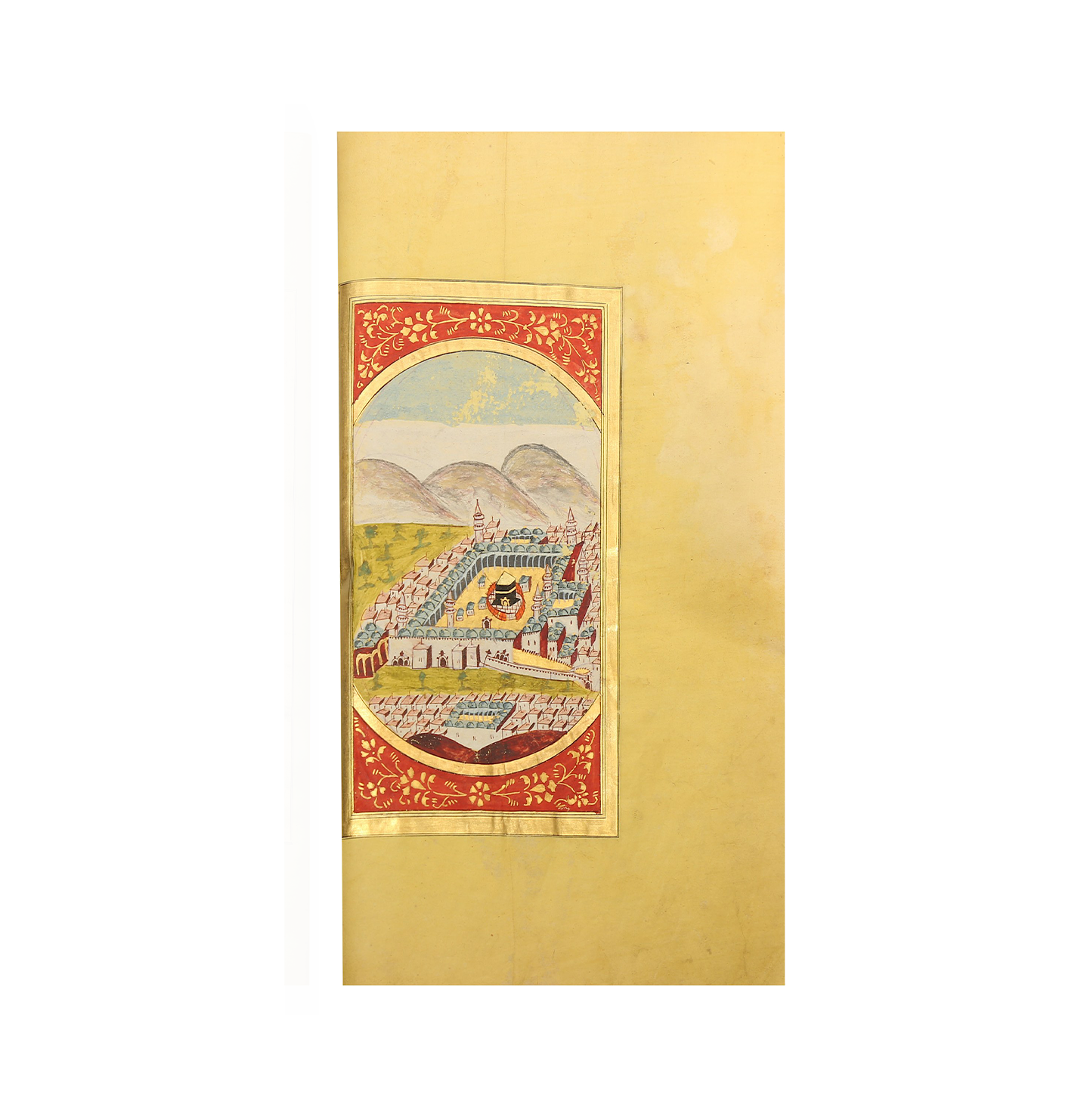 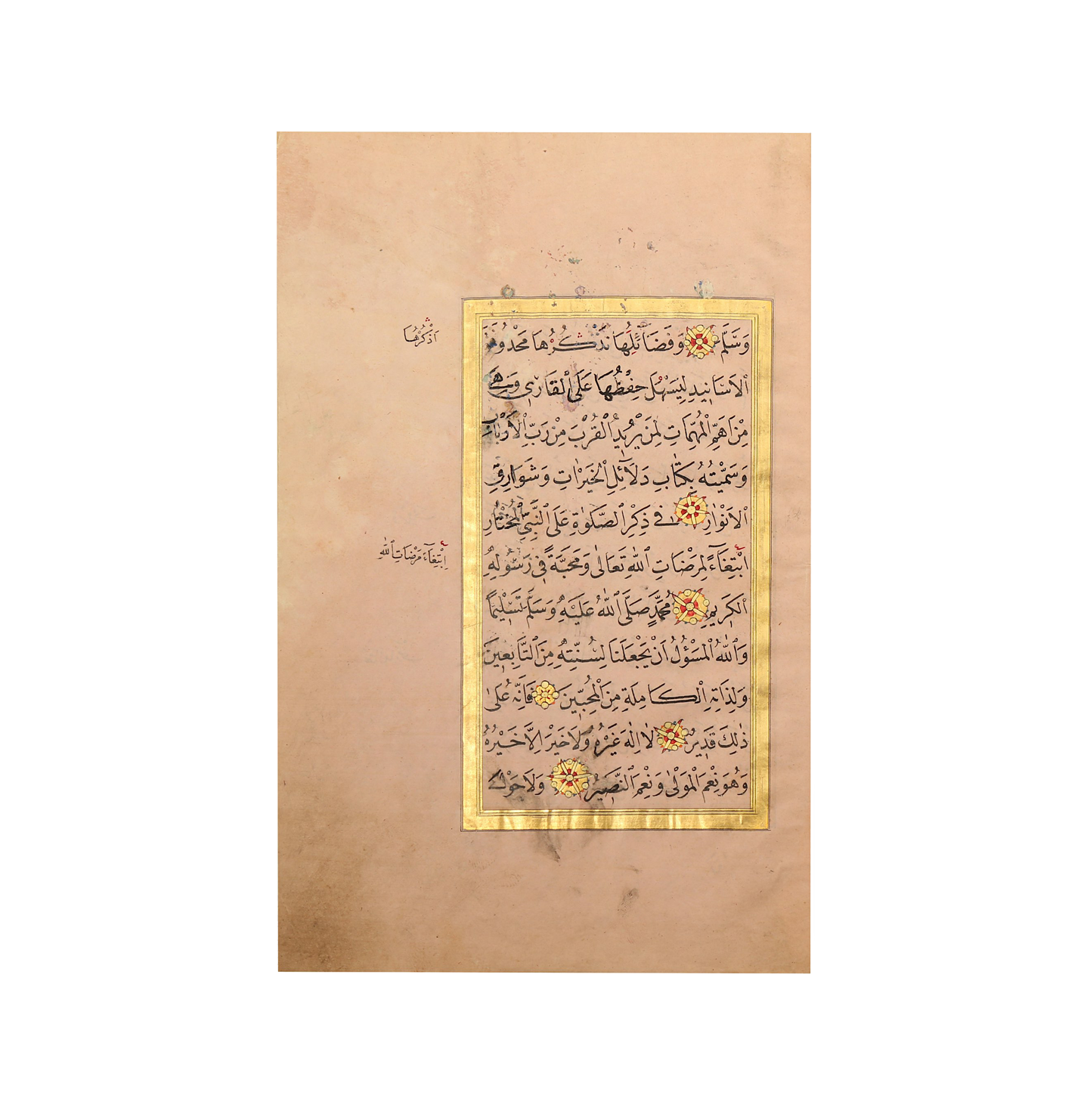 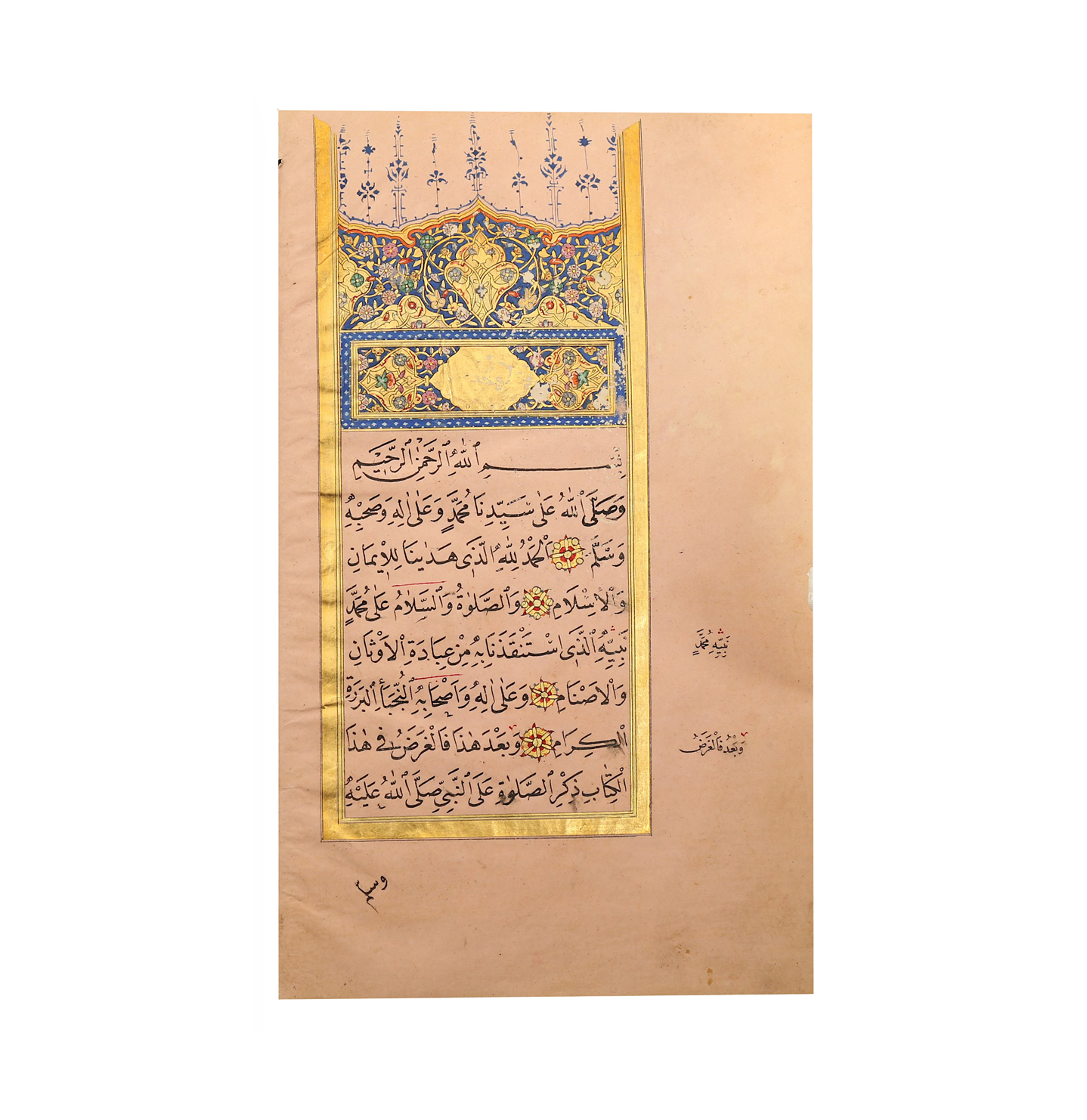 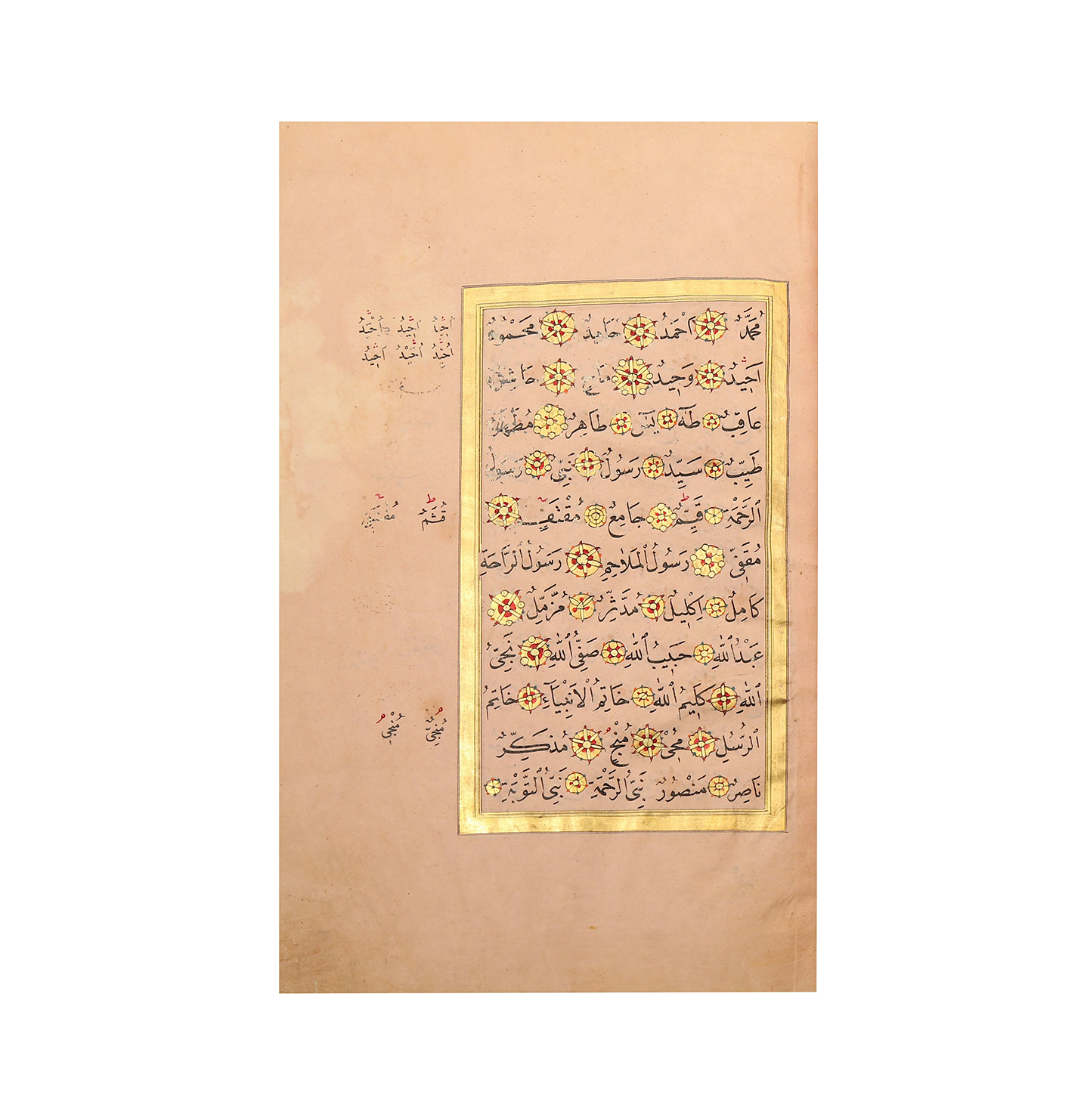 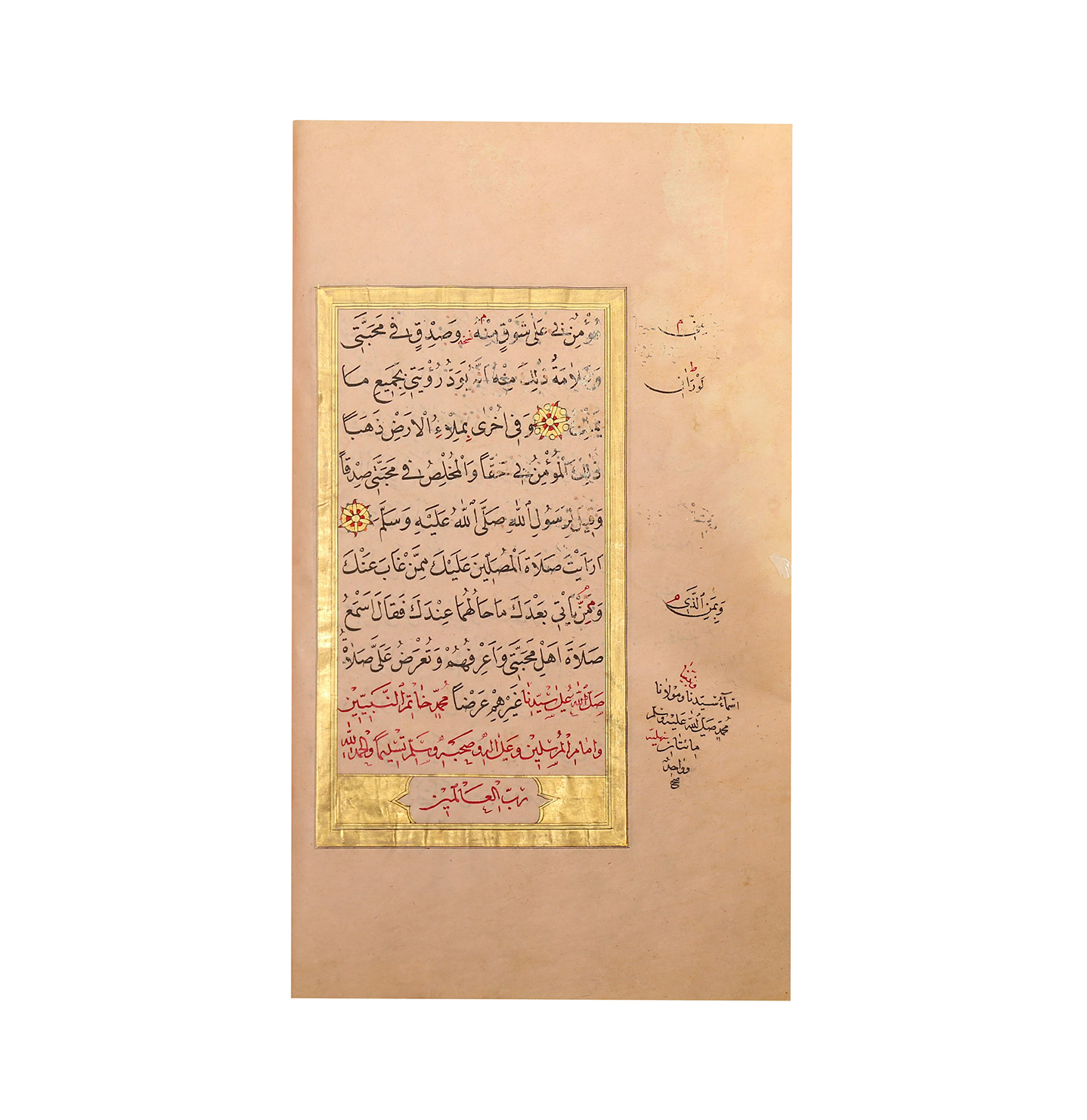 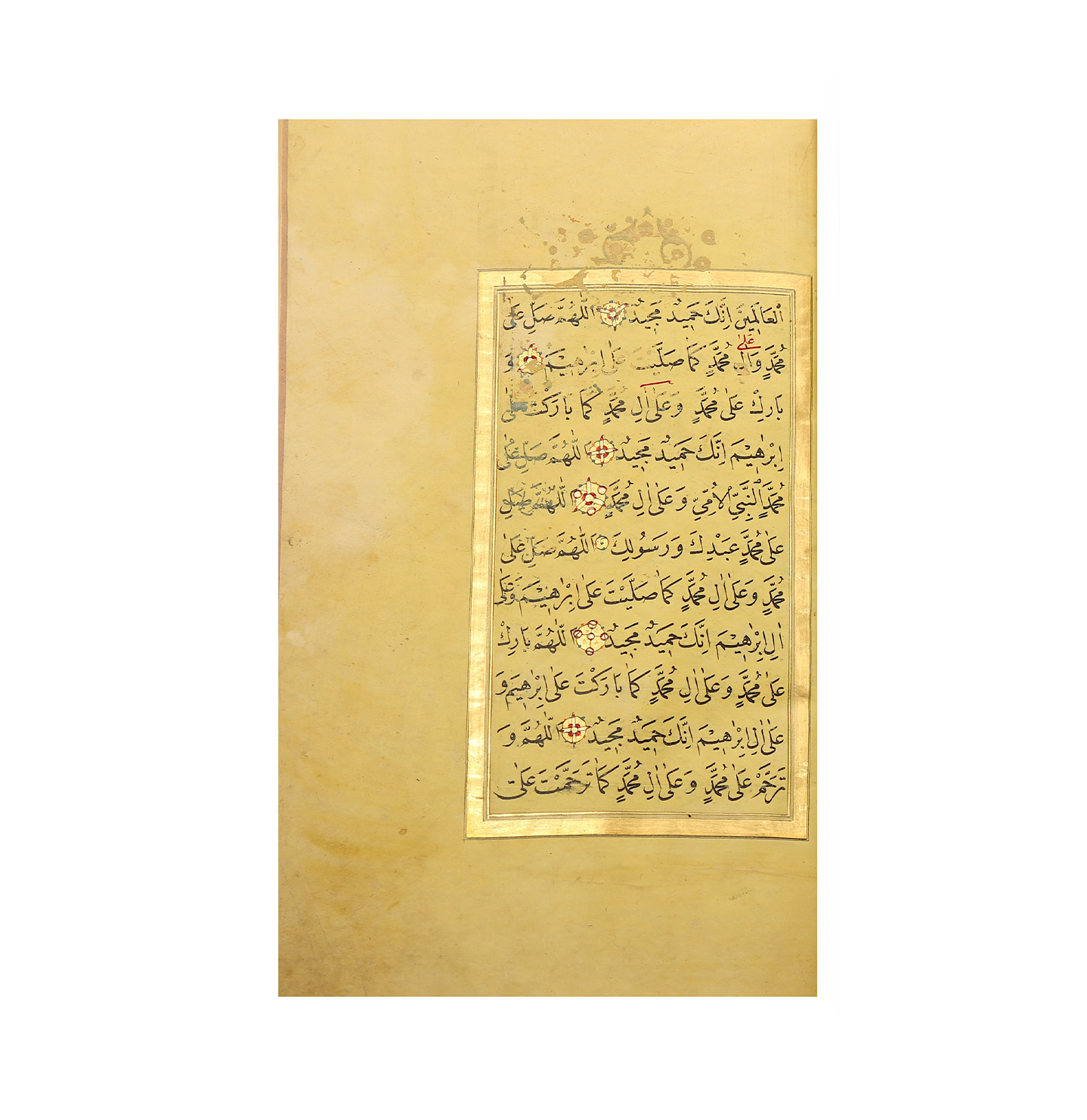 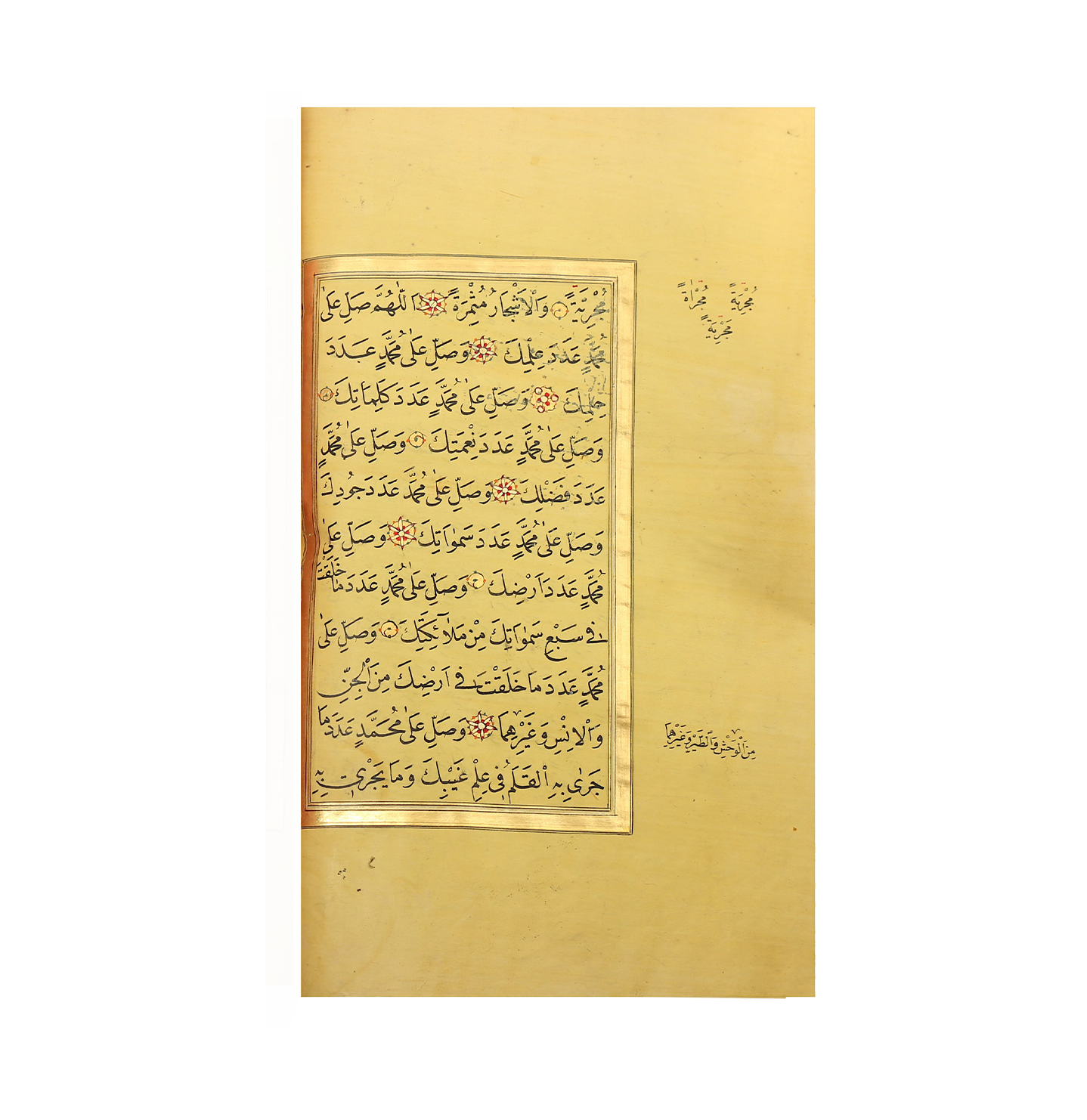 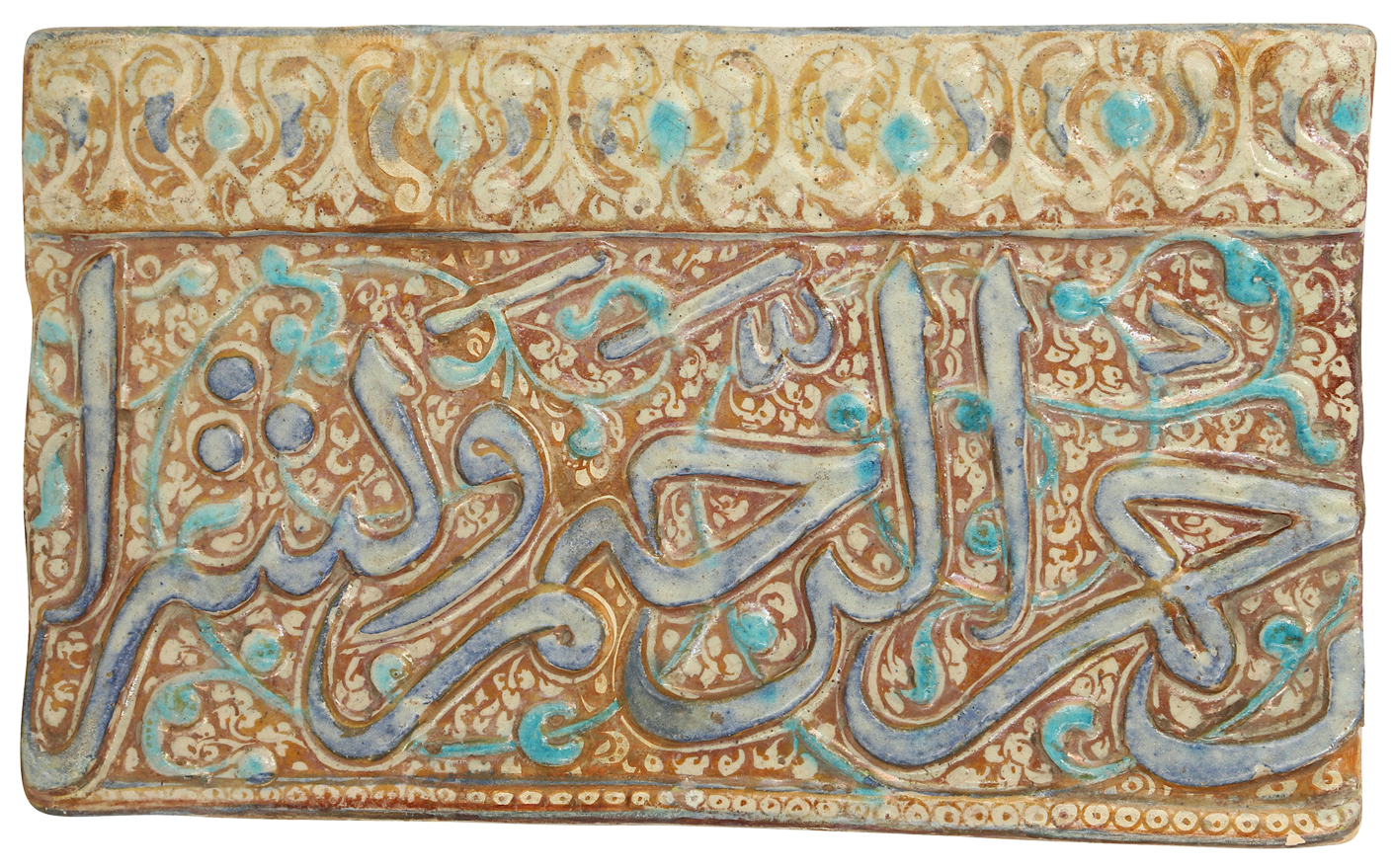 Our calligraphic tile shares several stylistic and decorative features of another similar sold at Christie's London, 2 May 2019, lot 21. Both tiles present large and bold thuluth Quranic inscriptions painted in cobalt blue and their lack of figural decoration in the form of birds, often featured on similar Ilkhanid pottery tiles, is indicative of their use for a mosque, religious structure or commemorative burial ground, where stricter aniconic rules would apply.

Sotheby's London also offered and successfully sold a number of similar Ilkhanid pottery calligraphic panels moulded in relief in their auction on 9th April 2014 (lots 1 - 6, except 5). In particular, lot 6 features an interesting pseudo-Kufic calligraphic frieze at the top of the tile fragment, possibly repeating the Arabic word al-‘izz (glory). The band shares the same style and design as our frieze, the only main difference being the vegetal element, instead of the pseudo-calligraphy.

Lot 532. A LARGE FOUR-FOLD EMBOSSED AND TOOLED LEATHER SCREEN
Possibly France or the Netherlands, dated Ramadan 1346 AH (March 1928) and signed by Prichett Delahaye (from The Hague)

The cartouches at the end of each panel read "This souvenir is a reproduction of the Gate of the Holy Mausoleum of Imam Reza in Mashhad, made for the Prince Momtaz os-Saltaneh Safir Kabir (Plenipotentiary Ambassador) in the month of Ramadan 1346, the work of Prichett Delahaye." 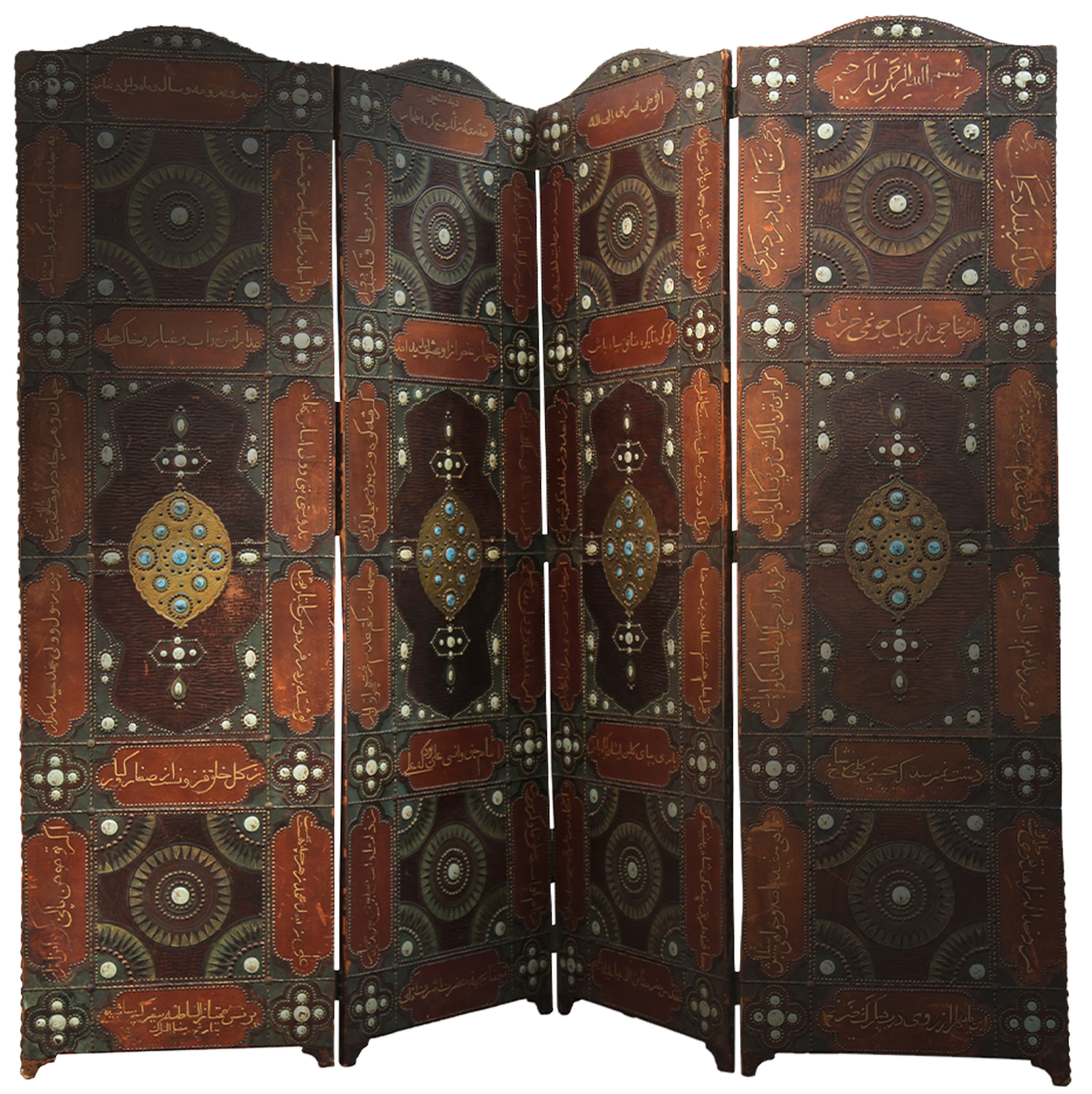 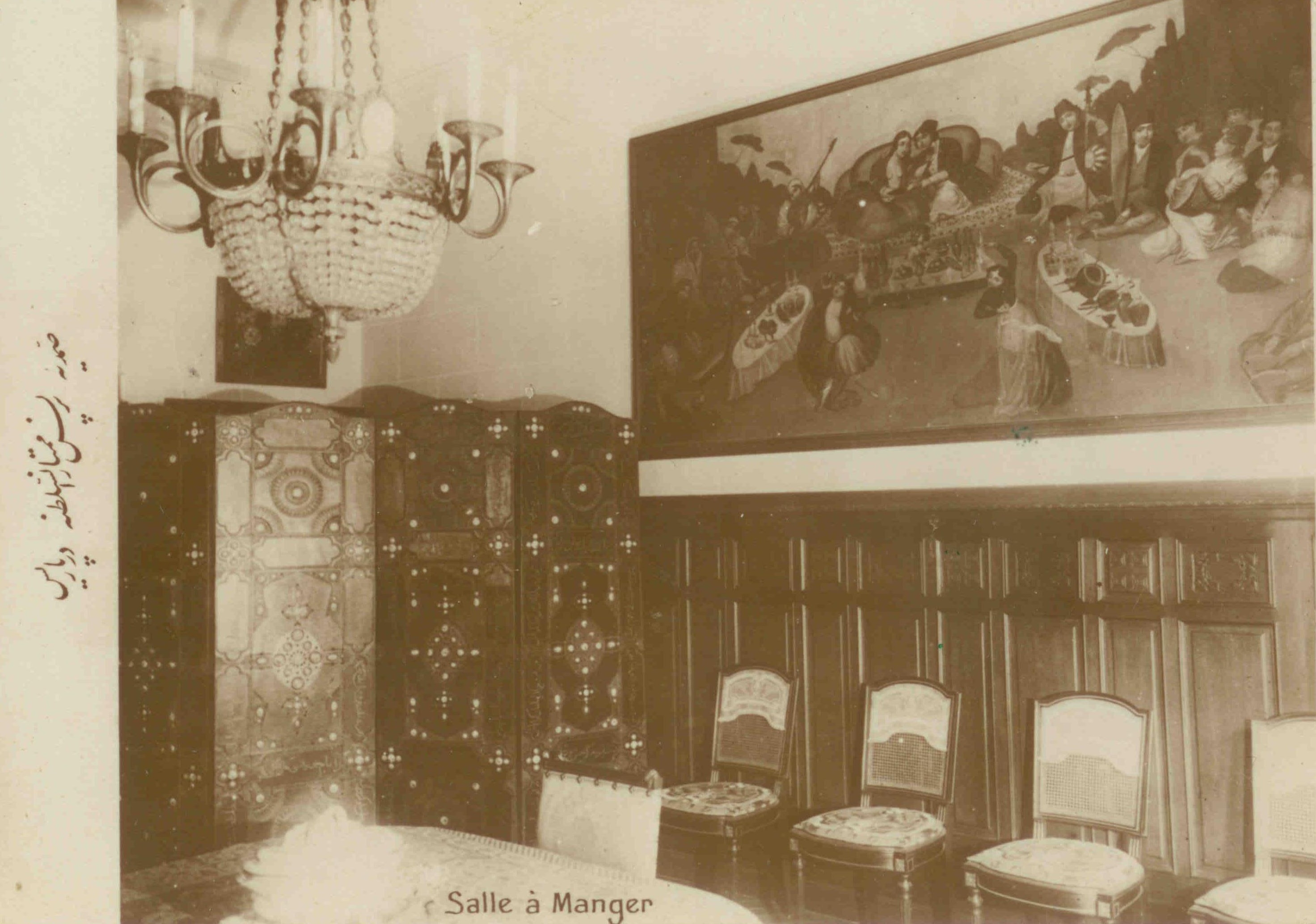 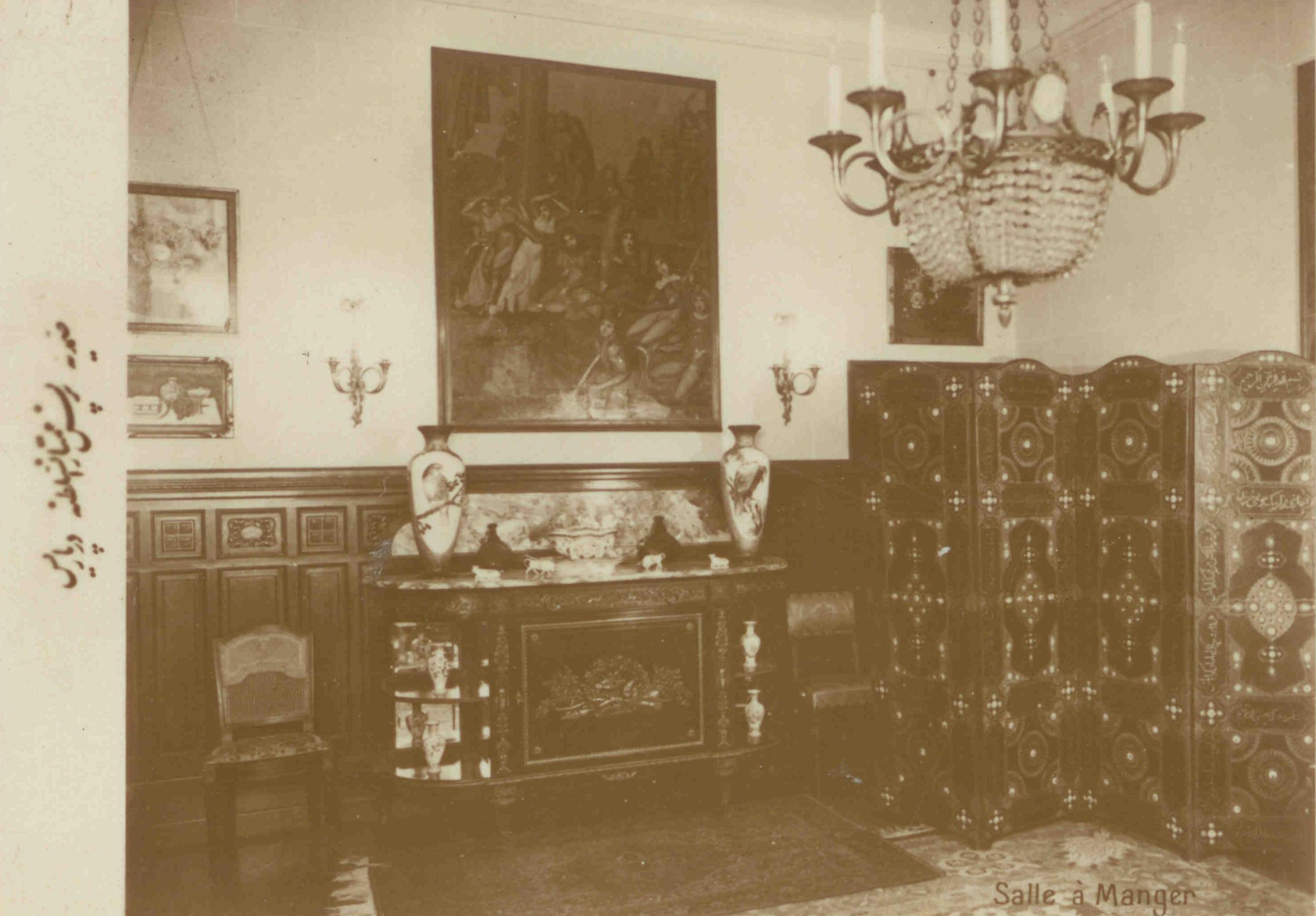 Samad Momtaz os-Saltaneh (1869 - 1954) was an Iranian diplomat under the Qajar and Pahlavi dynasties and he spent most of his life stationed in Europe as advisor and counsellor to the Persian Crown. In 1883, he was appointed Secretary to the legation of Persia in Paris, and later on, he participated in the European travels of the Qajar rulers Nasir al-Din Shah and Mozaffar al-Din Shah. He was the Persian minister in Belgium and the Netherlands before being appointed Extraordinary and Plenipotentiary Minister (Safir Kabir) in Paris in April 1905, a title he held until March 1926, just a month before the coronation of Reza Shah Pahlavi. After the change of dynasty, he decided to permanently reside in Paris, his second home, and never travelled back to Iran. The content of his Parisian residence, called Samaddieh, was offered at auction in Paris by Thierry de Maigret, Drouot-Richelieu, on 30th November 2017, including this screen (lot 386).

Among the treasured finds, some black and white photographs sourced from a family album, dating to over 80 years ago, clearly show the four-fold screen located in the dining room (salle à manger) of his residence, acting as a precious visual witness of the screen's provenance. Please note these photographs are not included in the lot; they are used for online reference only and were sourced from the Thierry de Maigret catalogue, 2017. The photographs are files from Wikimedia Commons since 6 December 2015.

A particularly striking feature of this screen is its material. Indeed, Persian screens were usually made of lacquer in the Qajar and Pahlavi periods, never leather. Possibly, since the Minister was residing in Paris and never travelled back to Iran, he had to commission this screen in Europe as a personal nostalgic reminder of his origins. Lacquer work was not as widely practiced in the West as in Iran. Thus, the Azeri diplomat would have had to look at locally available alternatives and French and Dutch leather craftsmen, possibly working in the bookbinding industry, were certainly available and skilled enough to produce the panels of this screen. The final result is impressive and unusual, a successful example of integration between different art techniques and styles. 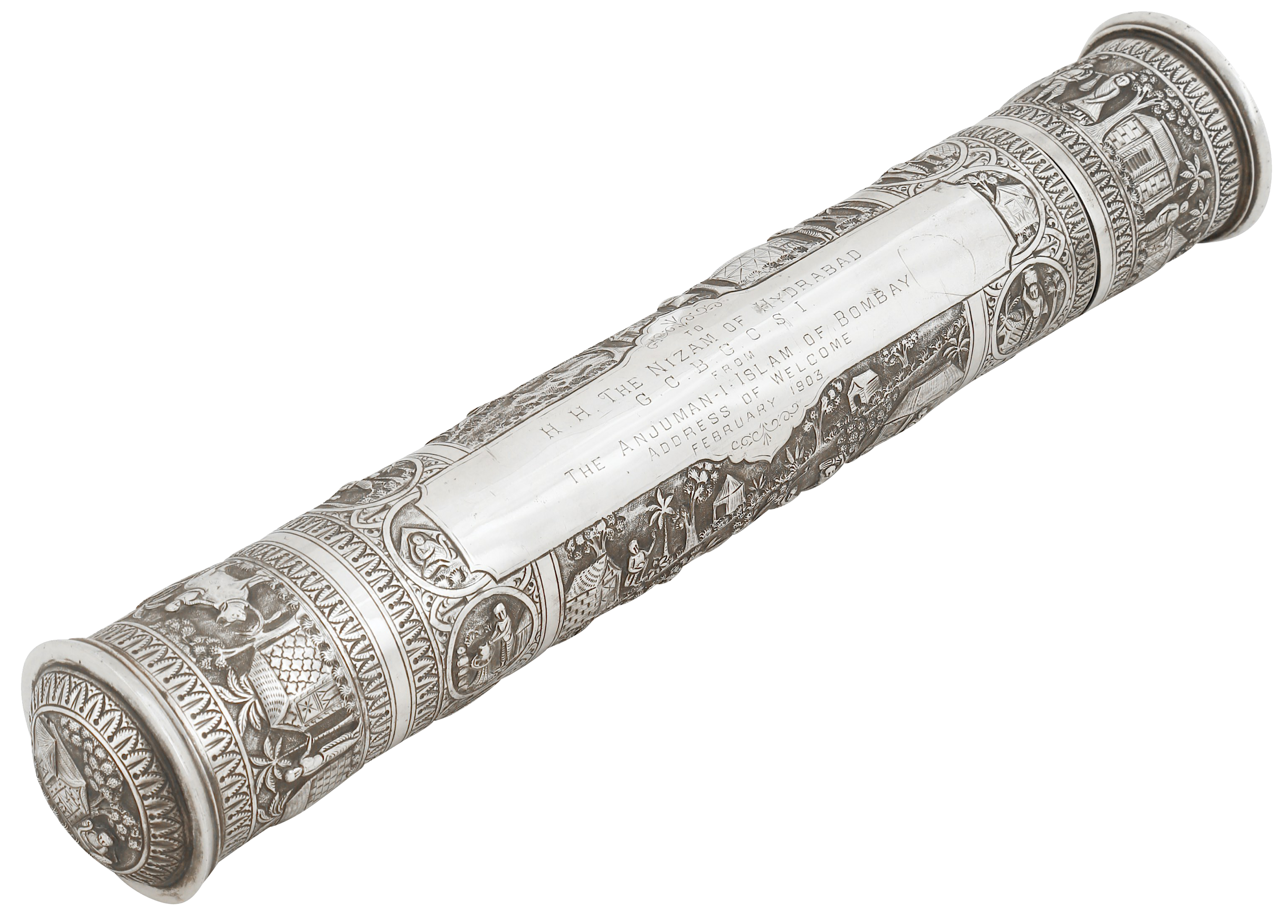 This commemorative silver scroll holder is a precious historical witness of the geopolitical and social orders in place in India at the beginning of the 20th century, a crucial time when the seed of Modern India as we know it today was being planted. After the death of Queen Victoria, Empress of India, in January 1901, her son Albert Edward became King Edward VII of the United Kingdom, Emperor of India and King of the British Dominions. The official coronation, however, did not take place until August 1902, and the Imperial Durbar in India until January 1903. The Durbar commemorating the coronation of King Edward VII and Queen Alexandra as Emperor and Empress of India was held in Delhi with a sumptuous ceremonial reception, meticulously devised by Lord Curzon and attended by the highest-ranking individuals in Indian society. Indian Maharajas and princes saw this as an opportunity to meet the new foreign Emperor in person and came adorned with the most spectacular gems from their collections. This was not only a party: it was a carefully planned political move to be in the graces of a distant monarch.

The Sixth Nizam of Hyderabad, Asaf Jah VI, Sir Mir Mahboob Ali Khan Siddiqi Bayafandi GCB GCSI (17 August 1866 – 29 August 1911), to whom our scroll holder is dedicated, was among the distinguished personalities who attended the Durbar, having a close connection with Lord Curzon. He had a great vision for his state, fostering strong infrastructural changes and educational development to make Hyderabad one of the richest and most advanced states in India. Indeed, Asaf Jah VI was responsible for establishing the Hyderabad Medical College, a first in India, and under his guidance, 14 schools were developed in Hyderabad city and 141 schools in the rest of the district, reaching 1000 by the time of his death (B. Bhangya, "Between Tradition and Modernity: Nizams, Colonialism and Modernity in Hyderabad State", in Economic and Political Weekly, 2013, Issue 48, pp. 120–125).

Given his interest in education, it shouldn't surprise that this scroll holder was given to him directly by the Anjuman-i Islam of Mumbai, an Islamic intellectual and social welfare organisation first established in 1874 by a group of Muslim visionaries, intellectuals and politicians seeking to reform Muslim society and work on its development. One of the major efforts of this organisation was to establish a number of schools for Muslim girls and orphanages in Punjab. This scroll holder probably once contained documents related to the foundation's expansion plans of the schooling network in other Indian districts. The Address of Welcome title suggests a meeting between the organisation and the Nizam, adding an invaluable puzzle piece to the history of the development of modern India.

William De Morgan (1839 - 1917) was together with his friend William Morris one of the key designers of the 19th-century British Arts and Crafts movement. De Morgan started his career as a designer of stained glass for Morris's firm in the early 1860s, but he soon decided to establish his own brand 'W De Morgan & Co.', which he did in 1869. Although he would become known for his ceramic designs, it was in this seminal experience of working with glass that he started noticing similarities between metallic silver oxide deposits left on the surface of glassware after firing and Persian copper lustre-painted pottery. This discovery was the pivotal inspiration behind his most famous ceramic series in the 1890s, the 'Moonlight lustre'. As well as Morris, De Morgan was well-acquainted with other important artists of the time such as John Ruskin and AWN Pugin. Among his connections in the pottery world, the most remarkable was Ulisse Cantagalli, whom he met during one of his foreign travels to the Middle East and with whom he collaborated on an Iznik-style pottery series during his stays in Florence, Italy. 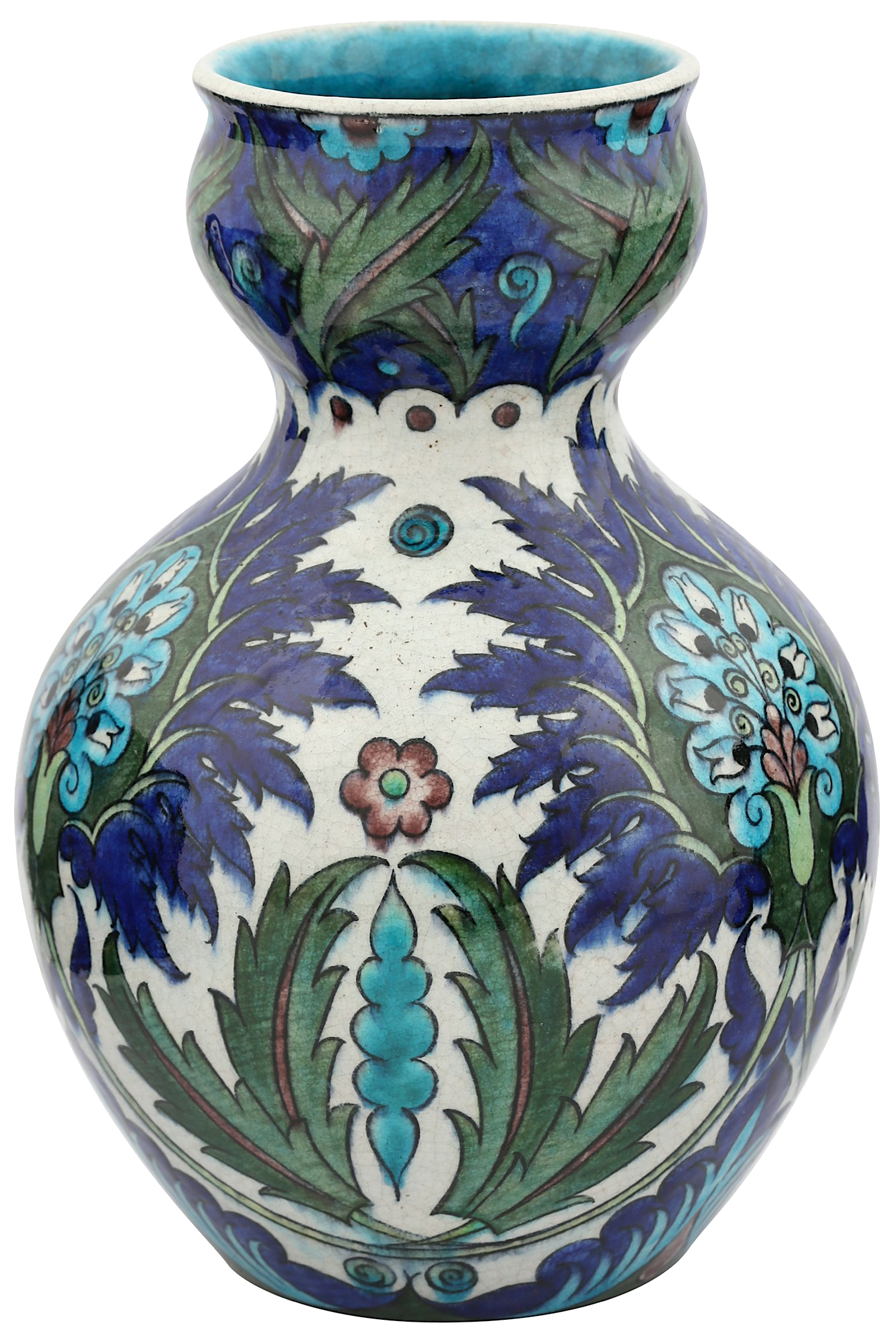 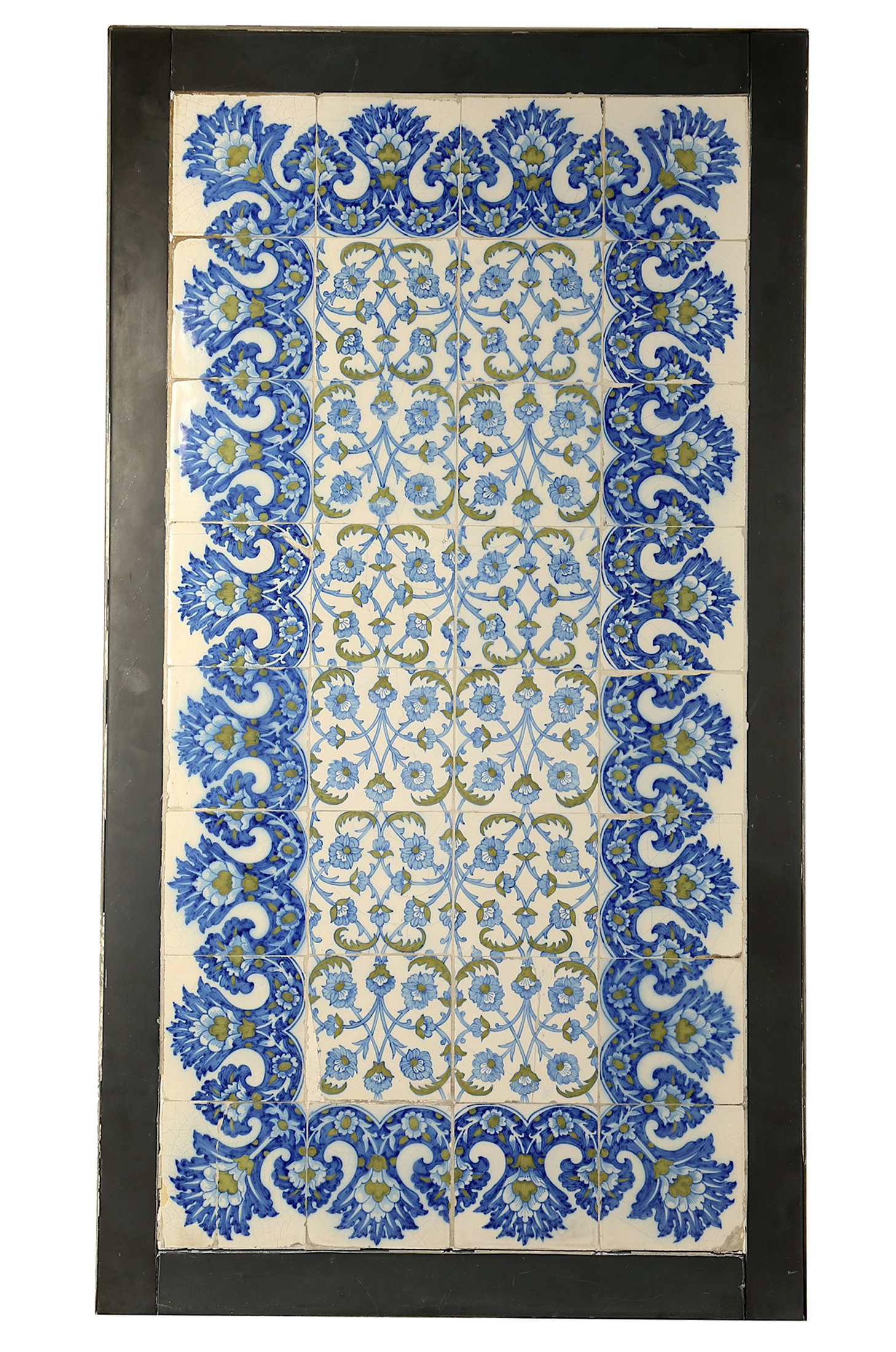 William Morris (1834 - 1896) was one of the most prominent members of the Arts and Crafts Movement in England. By the 1880s, he had become an internationally acknowledged commercial designer and his name was associated with some of the most iconic 19th-century interiors and wallpaper patterns, still very much en vogue today. His work, often incorporating plant and animal life, drew its inspiration from the simple rural life, designs of the Medieval period, and intricate patterns from foreign lands.

In particular, William Morris (1834 - 1896) was greatly inspired by the arts of Persia and the Middle East. In 1882, he would go as far as stating that Persia was the pattern designer's 'Holy Land'. In 1871, Morris left London to move with his family to Kelmscott Manor, an inspirational rural retreat in the Cotswolds, where he spent the last years of his life. The mansion can be considered the artistic testament of this renowned British designer, who enhanced every corner of it with his elegant and unusual patterns. As an example, next to the fireplace of his White Panelled Drawing Room there are rectangular tile panels repeating the same Persian diaper design as in our lot, proving the incredible popularity of this Iznik-inspired motif in 19th-century England. 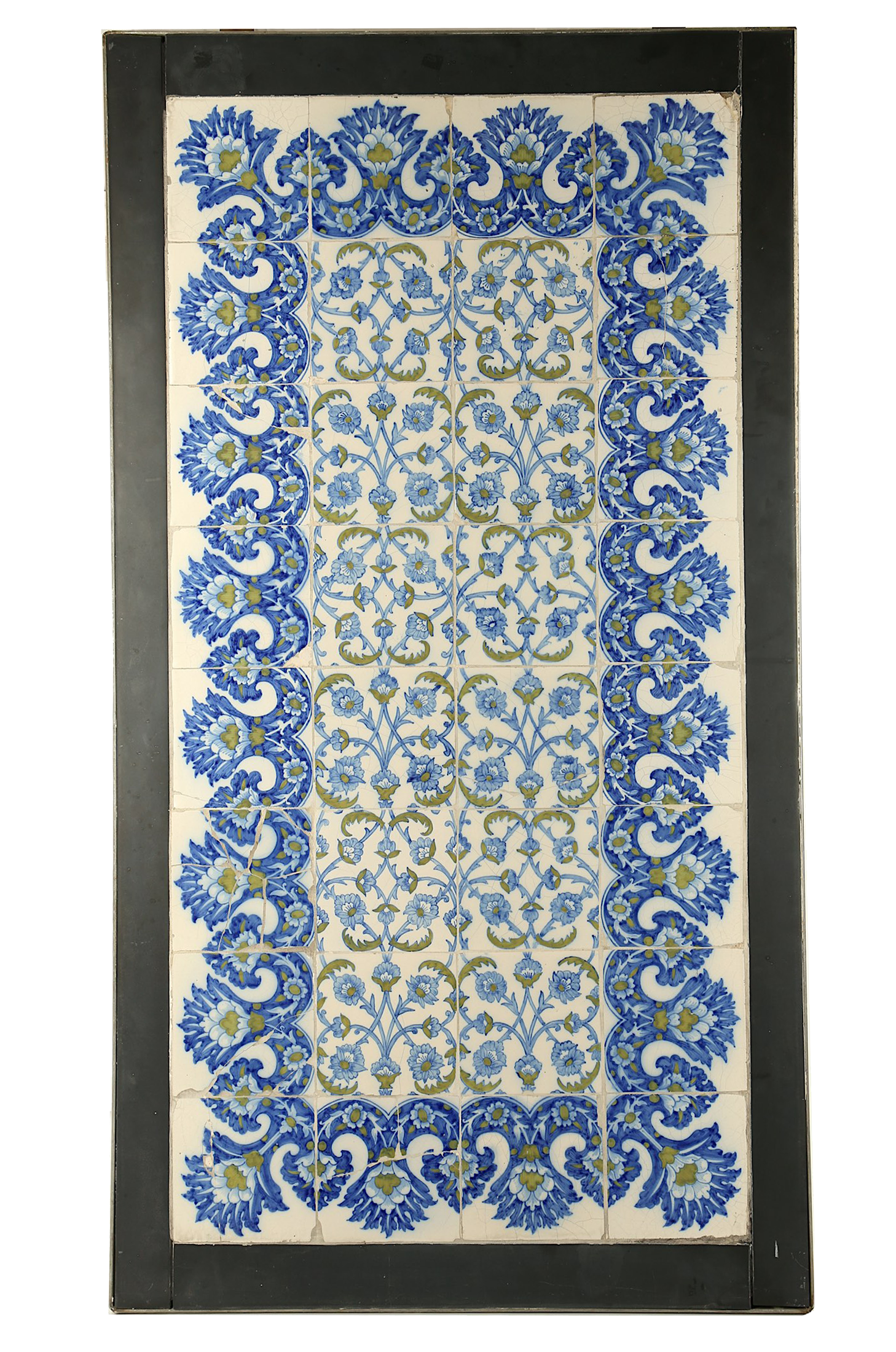 "Our October auction, one of the most accomplished to date, features several high-value lots that fill me with wonder. Our objects are ready to tell their story. Are you ready to listen?"