AFTER THE MODEL BY ANDRE-CHARLES BOULLE: A LATE 19TH CENTURY FRENCH GILT AND PATINATED BRONZE AND MARBLE MANTEL CLOCK 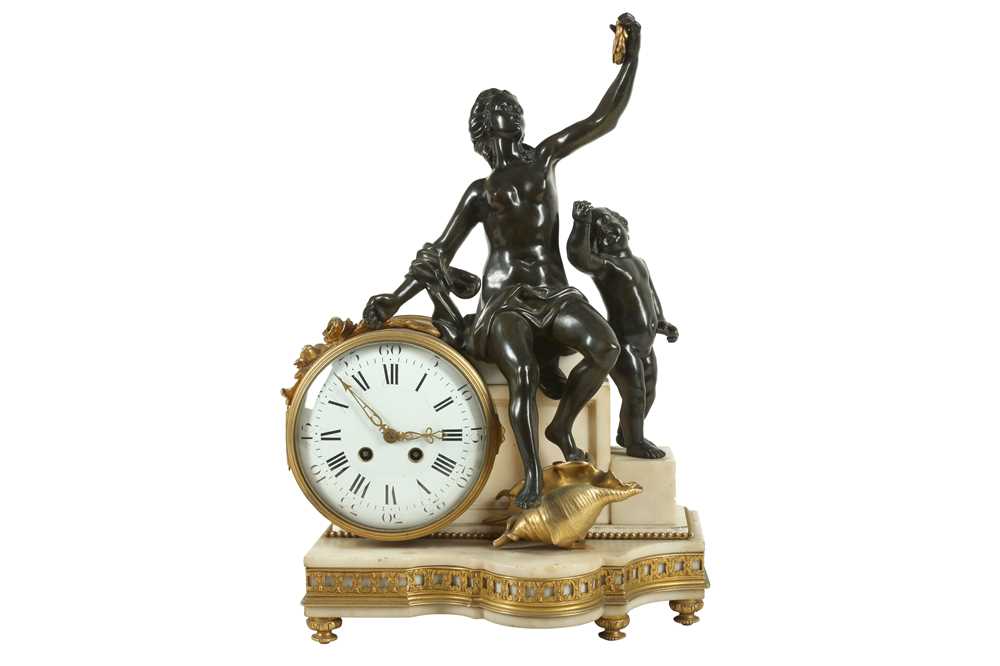 AFTER THE MODEL BY ANDRE-CHARLES BOULLE: A LATE 19TH CENTURY FRENCH GILT AND PATINATED BRONZE AND MARBLE MANTEL CLOCK

AFTER ANDRE CHARLES BOULLE: A LATE 19TH CENTURY FRENCH GILT AND PATINATED BRONZE AND MARBLE MANTEL CLOCK DEPICTING VENUS MARINA, the drum case raised on a shaped white marble plinth above five foliate cast feet and flanked by a figure of Venus Marine holding aloft a laurel wreath with a shell at her feet and Cupid beside her, the white enamelled dial with Roman numerals and Arabic five minute markers, the twin train movement with outside countwheel striking on a bell, stamped 'S. Marti MEDIALLE D'OR',

The clock is striking when the hands are turned but not fully tested or guaranteed.

The design for this clock is based on that created by André-Charles Boulle (1642 -1732) in 1715, an example of which is in the Wallace Collection. The original design for the bronze figures of Venus and Cupid was produced by Robert Le Lorrain and a version of the seated figure of Venus Marina, modelled as a statuette in her own right and cast circa 1715, is in the Getty Museum (74.SB.16).

Although the case of this clock is unsigned, we know that two of the most important bronziers of the late 19th century produced clocks based on this model. Francois Linke made three examples based on this design and Henry Dasson also used this model in his clocks. A clock by Henry Dasson of this form was sold at Sotheby's, 19 April 2007, lot 173 for $126,000.