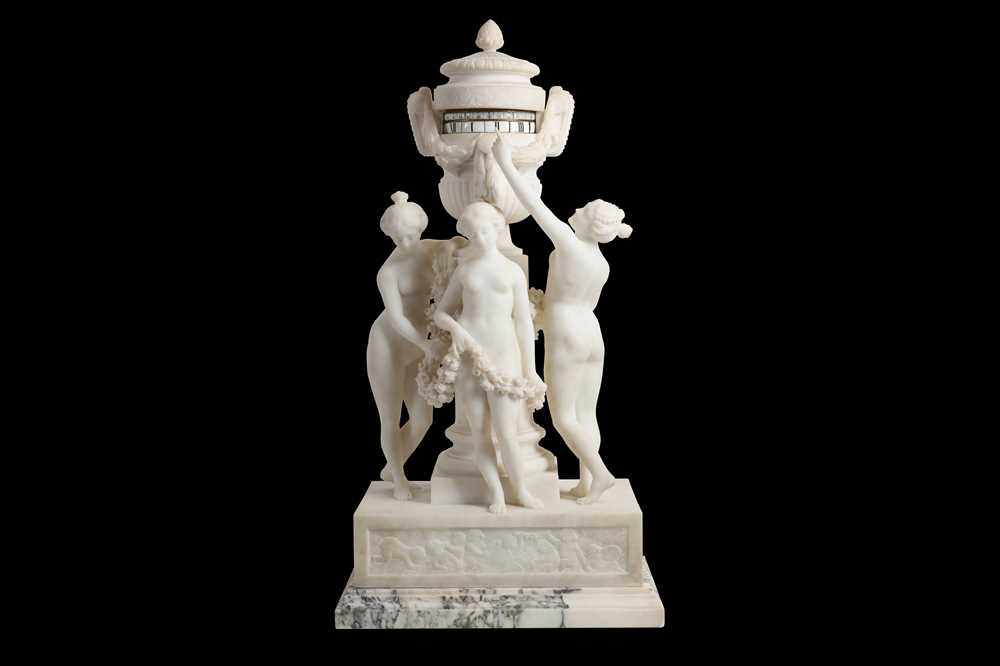 A FINE LATE 19TH CENTURY FRENCH WHITE MARBLE CERCLES TOURNANTS CLOCK AFTER FALCONET, the pendule à cercles tournants fitted in a twin handled, swagged urn with removable domed cover with a pinecone finial and Vitruvian scroll border, raised on a fluted column pedestal encircled by the Three Graces holding floral garlands, raised on a rectangular base carved in relief to all sides with frolicking putti amongst clouds, on a further stepped plinth of Breche Violette marble, the enamelled annular dials with Roman numerals and Arabic two minute numerals, the maiden on the right indicating the correct time with her left index finger as the dials rotate,
73cm high

This clock is of identical form to an example sold at Christie's, New York, 15 April 2011, lot 113, $17,500. They must surely have been produced in the same workshop as they both feature the very distinctive Breche Violette stepped marble plinths.

The design is based on that of a famous marble mantel clock produced in the 1770's by the important 18th century French sculptor, Etienne-Maurice Falconet (French, 1716-1791). During the 19th century the clock was in the collection of French Comte Isaac de Comondo, where it became hugely popular. Copies of the clock were made in biscuit porcelain as well as patinated and gilt bronze, but this example is much closer to the original design of the 18th century, which is finely carved in Carrara marble. The original 18th century clock was exhibited to great acclaim at the Paris Exposition Universelle in 1900: one review wrote that it had "attracted so much admiration from the crowds gathered around that the pressure was sufficient at times to endanger its safety." After the exhibition it was reported by The Art Journal that the Comte had turned down an offer of £120,000 for the clock by a wealthy American, and instead donated it to the Louvre, where it remains to this day.


The clock is in remarkable condition, with only a few very minor marks to the surface and minute chips.

The veined marble plinth has some small chips and a few hairline cracks, the front right corner and back left corners of this base have been restored.

The clock movement has not been tested.