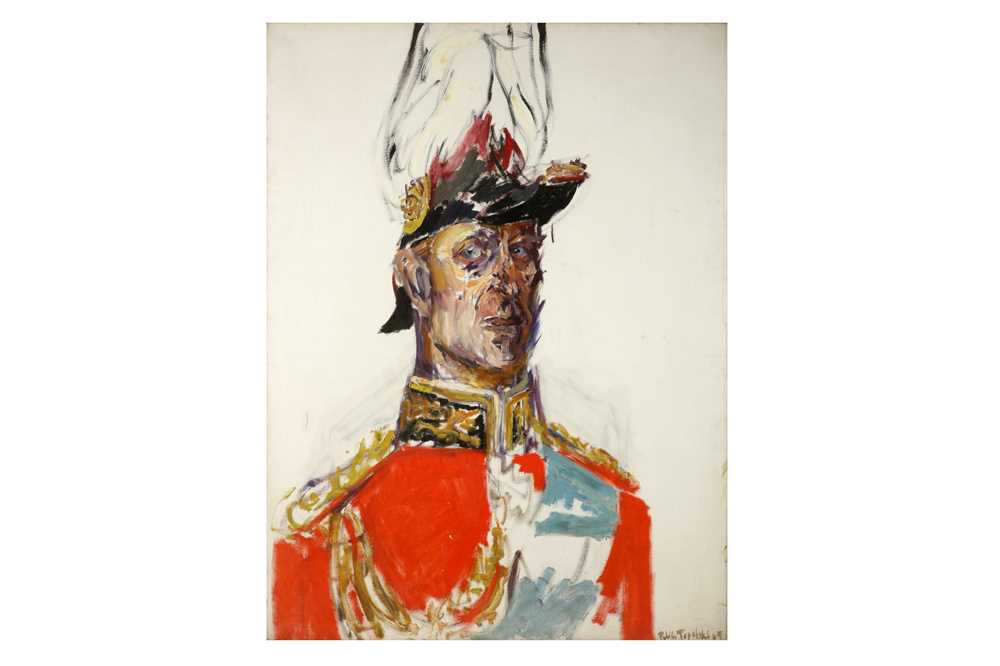 This lot is sold together with a letter from Prince Philip to Topolski, a photograph from Topolski's studio and a copy of London Life magazine with coverage of the Story of a Royal Portrait from 7th May 1966.

Portrait of Prince Philip, the Duke of Edinburgh is a spectacular painting by one of the greatest visual documentarists of the mid-twentieth century. 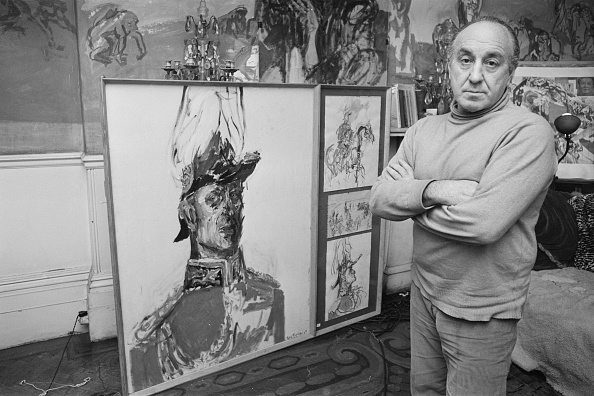 Born and trained as an artist in Poland, Feliks Topolski arrived in London in 1935 to provide illustrations of King George V’s Silver Jubilee for Wiadomości Literackie (Literary News). He would go on to spend the rest of his life in the UK where he quickly gained popularity. Works by the artist During the Second World War Topolski became an official war artist and painted scenes of the Battle of Britain and other battlefields. He contributed with illustrations to Night and Day and The London Spectacle among other publications. Sir Kenneth Clark commissioned him to record the impact of the Blitz on London. In 1938 George Bernard Shaw asked him to illustrate a new edition of his books noting that ‘the Polish artist was an astonishing draughtsman – perhaps the greatest of the impressionists in black and white’.

‘the Polish artist was an astonishing draughtsman – perhaps the greatest of the Impressionists in black and white’.
George Bernard Shaw

Topolski’s association with the Royal Family continued. He documented The Coronation of Elizabeth II on 2 June 1953 and later used his drawings for a commission for a mural from the Duke of Edinburgh in 1958, which still hangs in Buckingham Palace.

Painted in 1965, Portrait of Prince Philip (1921-2021) is a large scale focus on the sitter’s head, part of the preparations for a portrait of the His Royal Highness riding a horse, completed the same year and later hung in Windsor Castle.

When the portrait was commissioned, it was understood that the result would not be in the tradition of past Royal portraits, many of which shared a formalised features of the subject in bulky and unbecoming robes. The accent was to be on the man rather than the majesty. ‘The idea of an equestrian portrait was a difficult one to conceive and a real challenge to a modern painter like myself’ said Topolski when interviewed by Hugh Blackwell for the London Life article on The Story of a Royal Portrait. The artist did thousands of sketches of Prince Philip, in his studio under one of the arches of Hungerford Bridge near Waterloo station and during Prince Philip’s polo practice sessions at Windsor Park. He drew from his numerous ceremony drawings for the ‘colour and flamboyance’ he felt the portrait needed 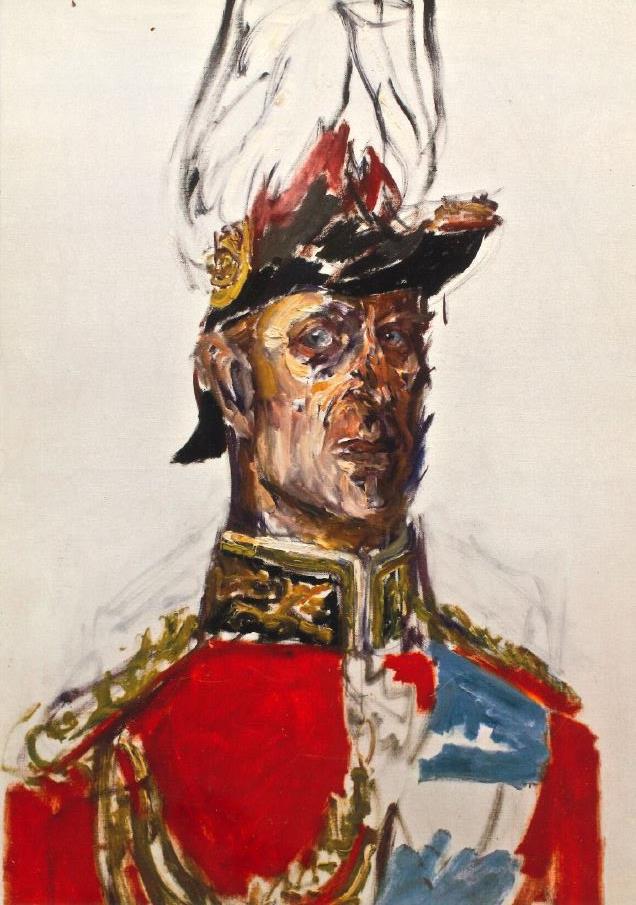 Topolski’s free brushstrokes create a sense of movement and excitement. The portrait is both an accurate and sumptuous representation of the Royal Figure, with a focus on His Royal Highness’s facial features with almost sculptural layers of impressionist impasto to the face and details of the Field Marshall uniform.

The equestrian version bears the same facial expression. In Hugh Blackwell’s words, Prince Philip ‘seems to be riding an unruly thoroughbred through the 20th Century with the straight back and the set face of someone who knows exactly where he is going. With his sword hung from the saddle, medals hanging over his heart, and wearing a ceremonial plume that streams at speed like a flare against blue skies, Prince Philip seems to be riding into the future. The horse with its Royal rider struts, trots, or stampedes (to choice), across the canvas, the horse a knitted whirl of movement and rhythms. The focus of the picture is Prince Philip’s face.’

Prince Philip and Topolski developed a friendship. In a letter to the artist about the painting, His Royal Highness wrote:

Your picture has arrived, for which I very many thanks. I have not seen it yet as it went direct to St. James and we are still in Scotland.
I was very disappointed that you did not come to the Thursday Club dinner it really was a great feast.
I hope all your arrangements for covering the proceedings went all right.

Between 1953-1979 Topolski actively captured contemporary events in his Chronicles series. They contain around 3,000 drawings and have been exhibited in numerous cities across the globe. Elected a senior Royal Academician, Topolski remains one of the most exciting draughtsmen of the 20th century.


Topolski in his studio, as reproduced by London Life in 1966, Portrait of Prince Philip, seen in the background