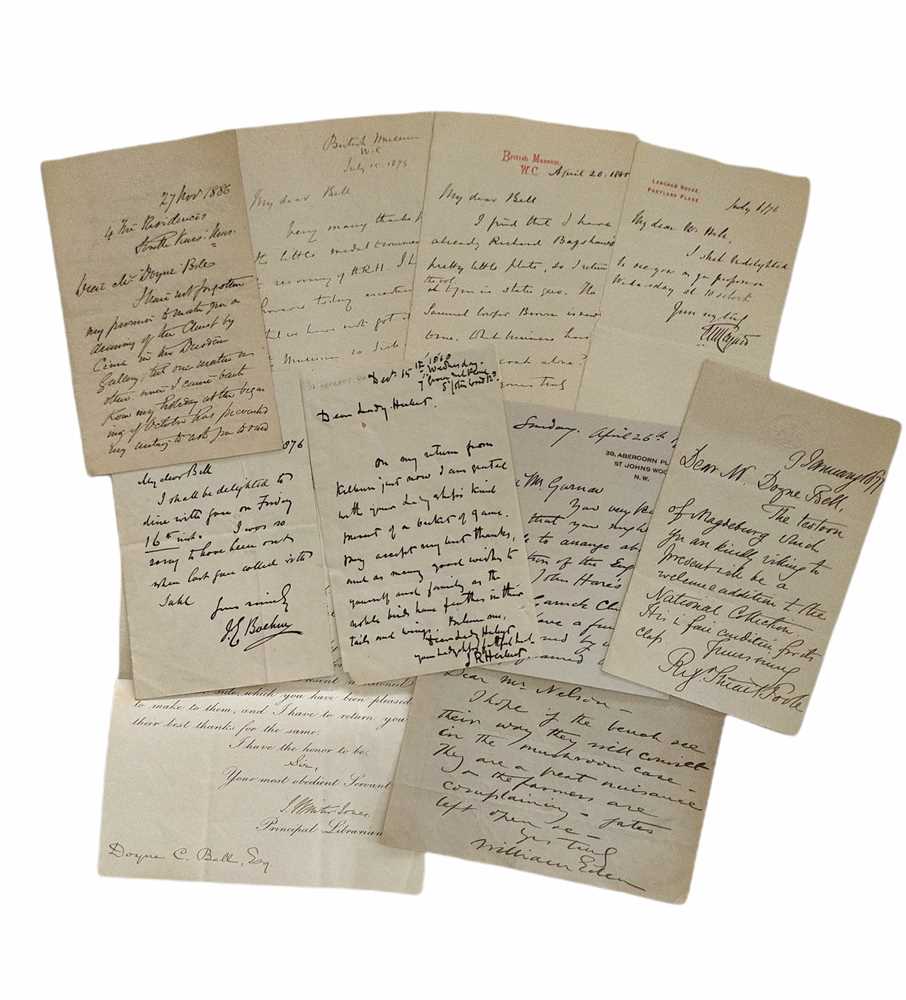 Collection of letters and notes signed by 19th century artists, painters, architects and collectors, including: James Fahey (four letters to H. Mogford Esq., one reading "As it is a matter upon which every member will act upon his own particular view of the subject of the Committee...they think it would be more likely to promote your object were you to send circulars stating particualrs to each member", one page, 1 April 1853); Joseph E. Boehm (four letters to Doyne Bell, one saying that Professor Miller has a pass to see the pictures at Buckingham Palace and asking Bell to join them, three pages, n.d.; another letter invites Bell to a studio viewing together with a German delegation and Princess Louise, two pages, 27 June 1881); Edwin Landseer (returning some tickets as he is "quite unwell with a bad headache", two pages, 1860); James Holland ("My not having the same flowers to work from I have been compeleld to make some alterations in the grouping, which will interest Mrs Rowe as a sample of the difficulties experienced by all who paint flowers...I am not quite convinced of what I have long entertained a strong opinion, that no remuneration can be obtained in this country that will enable any person to gain a respectable living by painting flowers alone", one page, 23 June 1839); William Tyssen Amhurst; Richard Wallace (to General Lyndoch Gardiner, "You are quite at liberty to use my name in any way you may think proper in connection with the election of Guardians of the Poor", one page, 25 March 1878); Stanley Leighton (signed House of Common pass); Frederick Leighton (letter in secretarial hand to Professor Skeat, saying he's happy to have his name added to a list for a small donation of five guineas, two pages, 4 January 1895); John Winter Jones (document thanking Mr Doyne Bell for his gift to the British Museum, one page, 23 February 1877); George Cole; Lionel Cust ("The portrait of Dryden, which has been reproduced is that engraved by Edelinck and apparently the 'Kitcat', but I am not sure", one page, 1 April 1893); Jules Dalou; Heinrich von Angeli; George Wallis (promising Mr Doyne Bell he will make a drawing of the Christ by Cima and enquiring as to size, mounting etc. required, three pages, 27 November 1886); John Archer; Edward Augustus Bond (document thanking Doyne Bell for the donation to the British Museum of an exhibit, one page, 22 September 1879); William Boxall (five letters to Doyne Bell on various subjects); William Charles Thomas Dobson (responding to a request for his autographs and sending an engraving of his picture "The Good Shepherd", one page, 24 March 1891); Oswald Walters Brierly (referring to his painting for Sir Edward Guinness, one page, 9 July 1885); Reginald Stuart Poole; Sir William Eden; John Bell (two letters, one saying "I am glad you like the Cromwell. I did the model of it to please myself and (when the question which from time to time comes up of whether he should have a statue is answered in the affirmative) I hope I shall have the benefit of having done so", three pages, 9 July 1868); William Theed (to Alfred Denison, "I am happy to say that not only I have the Apollo in hand, but I hope that it will be finished towards the end of October. I have been much more successful this time with the marble, the final block having turned out beautifully. I have had a fine carver from Rome employed on it who came over with Mr Gibson, to remain a few months, and the hair is now being worked by a first rate hand, likewise from the Eternal City", three pages, Michaelmas Day 1862); and others, v.s. (49)