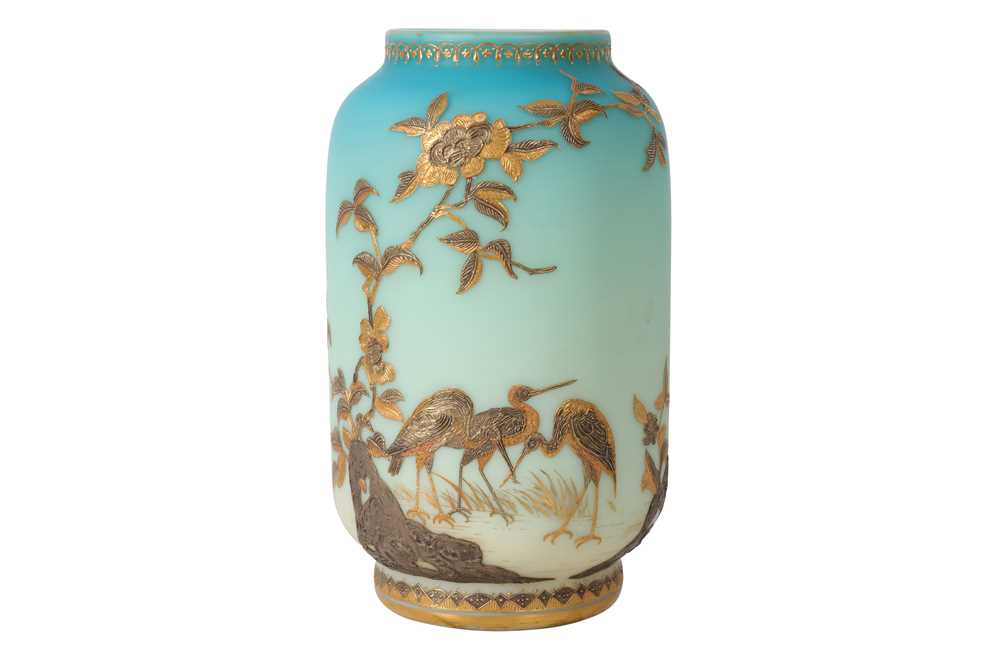 A LATE 19TH CENTURY STOURBRIDGE GILT AND SILVERED TURQUOISE-BLUE OPALINE GLASS VASE circa 1880, possibly by Jules Barbe for Thomas Webb and Sons, of ovoid form with a short neck and foot, decorated in Japanese style with three heron under a flowering branch issuing from rockwork,

The highly intricate gilding would suggest an attribution to the artist Jules Barbe. Barbe was born in Paris where he trained as a decorative artist. Following his wife's death during the siege of Paris in the Franco-Prussian War, Barbe brought his family and twenty-six other French craftsmen to London. Barbe settled in Stourbridge where he went to work at Thomas Webb and Sons. He worked exclusively for Webb's until 1901 working closely with the master cameo artist George Woodall. Barbe then set up as a freelance decorator working alongside Stuart and Sons. A silvered and gilded vase attributed to Barbe depicting carp in a pond was sold at Sotheby's, London, 9th February 1993, Lot 106. Ray and Lee Grover illustrate a further vase by Barbe decorated in the Japanese taste, English Cameo Glass, New York, 1980, p. 287, C268.

Condition report
In overall good appearance and generally good condition with only minor gilding wear at the rim and footrim. Some very minor surface marks and blemishes consistent with age, old dirt and dust.