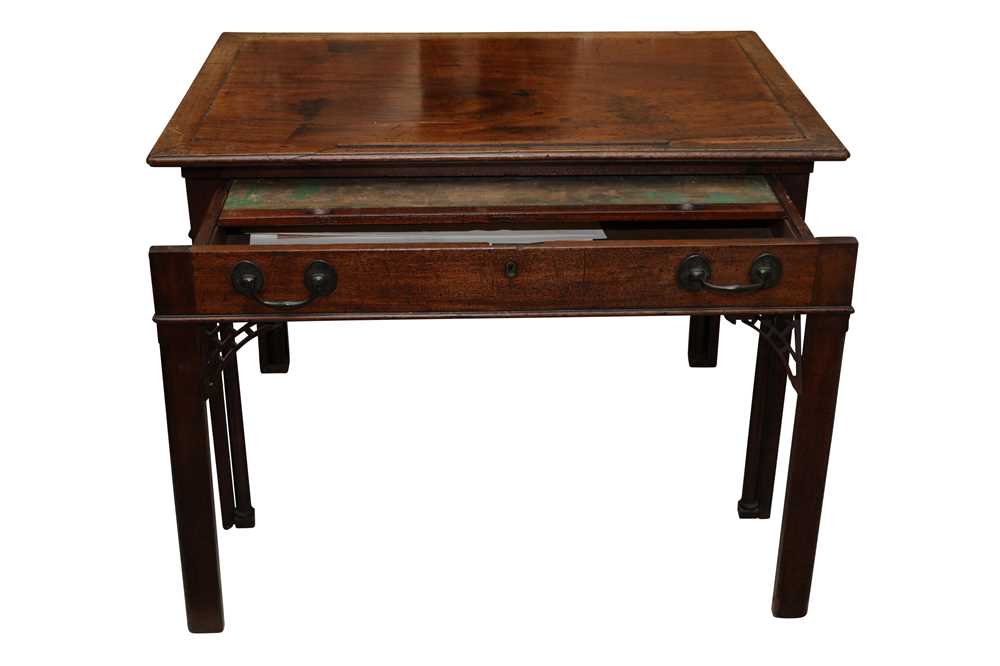 A GEORGE III CHINESE CHIPPENDALE STYLE MAHOGANY ARCHITECT'S TABLE, the rectangular tilting top with a lectern shelf to front, on a ratchet system back, above a front drawer section with brass handles opening to reveal a sliding surface, lacking cover with storage space beneath, with plain facade legs and pierced fretwork brackets, with supporting legs in the form of doric columns

PROVENANCE:
Sir Luke Fildes RA, London (Eminent in his day, Fildes (1843-1927), was a highly accomplished and much acclaimed painter, portraitist and illustrator. Admired for his social-realist subject matter, Dickens engaged Fildes to illustrate what would be his final novel Edwin Drood. Following Dickens' death in 1870 The Graphic published Fildes' The Empty Chair as a tribute to the author, a composition thought to be the inspiration for Van Gogh’s painting Gauguin’s Chair (collection of the Van Gogh Museum, Amsterdam). Today Fildes is widely known for his painting The Doctor, commissioned in 1890 by Henry Tate and now in Tate Britain. Fildes took on architect Norman Shaw to design his house and studio Woodland at 11 Melbury Road (now number 31) in Holland Park, where he lived and worked for fifty years. The house has since been home of film director Michael Winner, and is now owned by the singer Robbie Williams.
Geoffrey Fildes, London (son of the above)
Thence by descent to the late owner (daughter of the above and widow of Bernard Myers)