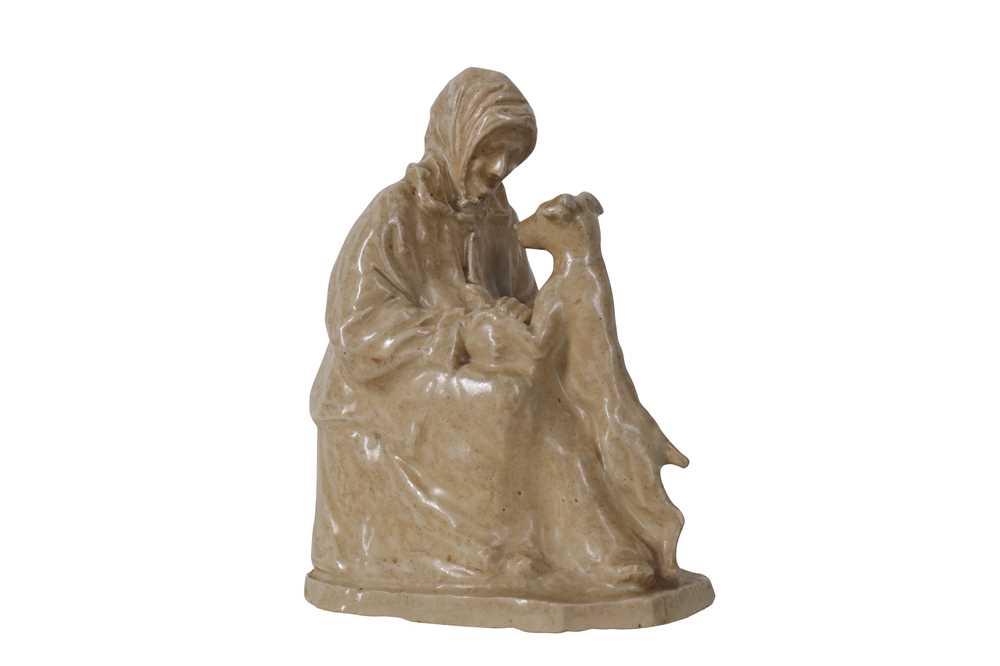 AN EARLY 20TH CENTURY GLAZED EARTHENWARE FIGURE OF AN ELDERLY LADY WITH HER DOG ATTRIBUTED TO MARY BUCHANAN (SCOTTISH 1876-1958) dated 1922, modelled as a seated elderly woman in a full coat and bonnet looking at her dog which has its paws in her lap, titled to the front 'P O'Clock', also signed to the interior, 'Buchanan, Wimbeldon, 1922', 20.5cm high

Auction Comparable: See Christies, London, South Kensington, 6th October 2015, Lot 194, a cast of ‘Seated Woman’ or ‘The Dreamer’ dated 1910, an earlier bronze by the artist with strong similarities in the composition and modelling, Sold for £1000

Buchanan was born in Paisley, Glasgow, where she studied at the Paisley School of Design and at then The Glasgow School of Art under the sculptor Johan Keller. She lived for a long time in Paris, working in the studios of Bourdelle and Zadkine and exhibiting at the Salon. Her sculpted work, in wood and marble, consists mainly of figures and heads, while she was also an accomplished practitioner in watercolour, to which medium she turned increasingly in later life. Buchanan exhibited in the Royal Glasgow Institute of Fine Arts from 1910–26 and the Royal Academy of Arts, London from 1924–31.

This piece bares a strong resemblance to one of Mary Buchanan’s works in bronze of 1910 entitled either ‘Seated Woman’ or ‘The Dreamer’ (‘La Reveuse’). There are similarities in the seated pose of the woman and the modelling of the surface between it and this piece. Casts of ‘Seated Woman’ or ‘The Dreamer’ are held in the collections of the V&A Museum, London (Museum Number A.9-2015) and Collection of the City of Edinburgh Council, City Art Centre.