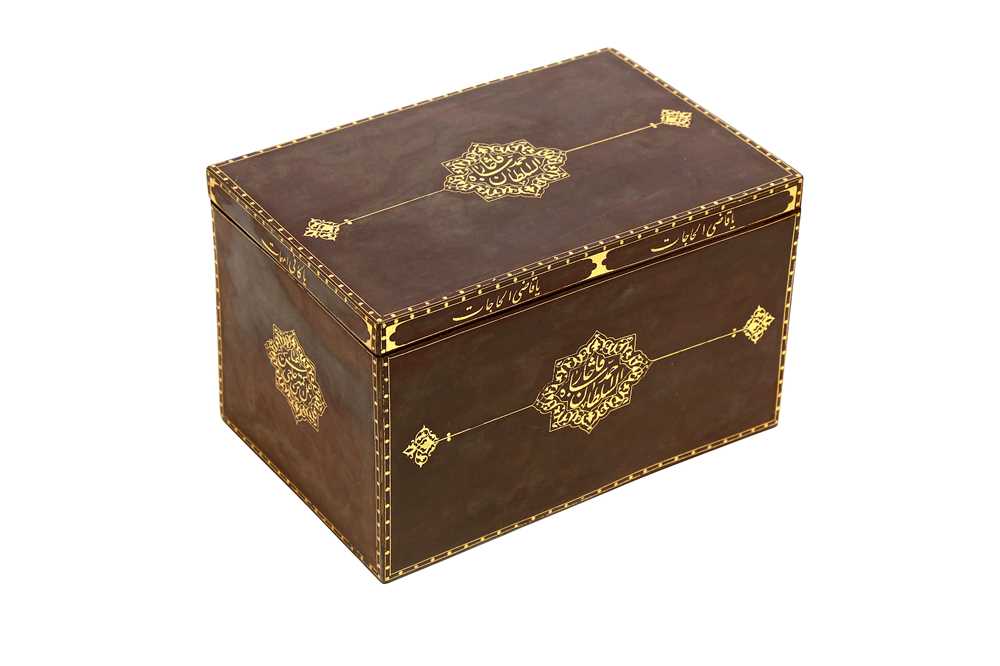 Of rectangular shape, resting on a flat plain base, the steel exterior finely inlaid in gold with cusped arabesque medallions in the centre of each side and on the lid, the medallions filled with typical split palmette scrolls replicating the rumi motif of manuscript illuminations and crisp nasta'liq epigraphic inscriptions reading Sultan Ahmad Shah Qajar, the Work of the Humble Hajji 'Abbas, further inscriptions repeating Ya Qazi ul-Hajat, Ya Kafi al-Muhammad (invocations to Allah) and narrow decorative bands of beaded motifs on the edges and corners, 14.5cm x 23.5cm x 15cm.

Hajji 'Abbas is the name or takhallos used by one of the great masters of Persian metalware, in particular of steelwork. James Allan identified the first and most influential Persian steel craftsman calling himself Hajji 'Abbas as the maker of the Safavid period kashkul in the Nuhad es-Said Collection (James W. Allan, Islamic Metalwork: The Nuhad es-Said Collection, London, 1982, no.26, pp.114 - 117). That said, in the Hermitage Museum, there are two examples of fine steel artworks (a kashkul and a peacock) dated to the second half of the 19th century, Qajar Iran, and bearing the same name.

Our box must have a later date than the works in the Hermitage collection, given that Ahmad Shah was only born in 1898. Nevertheless, the quality of the steel gold damascening and the signature on our lot appear to be quite similar to other Qajar-period works attributed to Hajji 'Abbas. An explanation for this dating inconsistency could be that this takhallos was often improperly added as an 'assay' mark on pieces that were thought to be of better than average quality, regardless of their time of production and dating. A pair of Qajar gold-damascened bottles signed Hajji 'Abbas and dating to the late 19th century were successfully sold in these Rooms last year, 22 April 2020, lot 137.