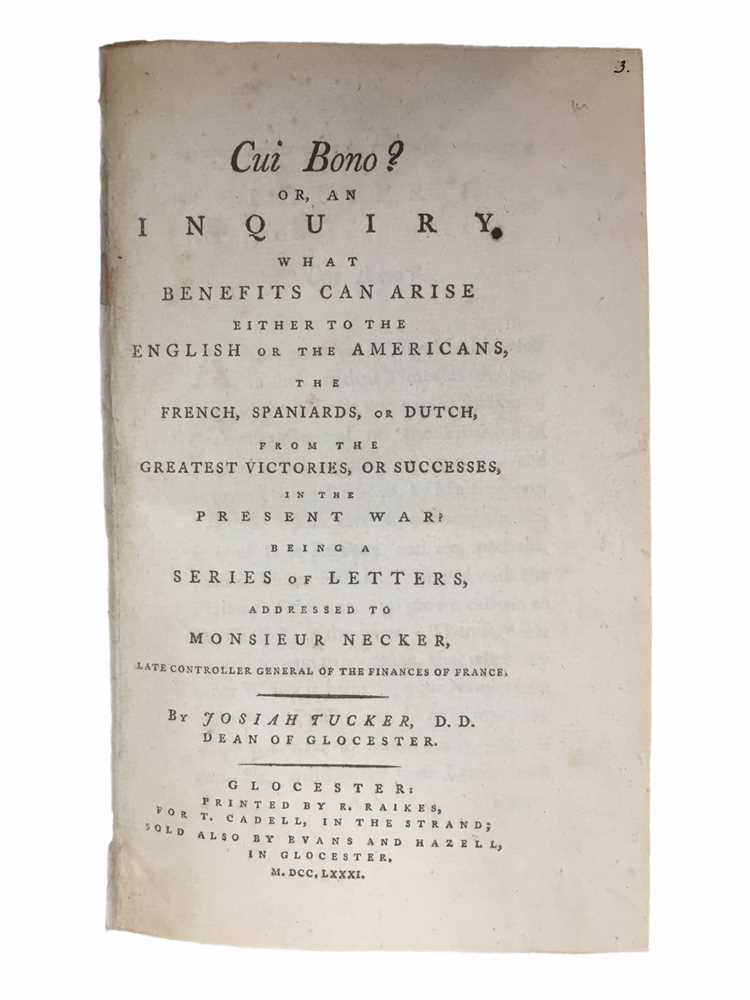 "An Appeal To The Justice And Interests Of The People Of Great Britain, In The Present Disputes With America," Second edition, corrected, 32pp., Printed for J. Almon, 1775.***This was a powerful and influential pamphlet by the Virginia physician and lawyer who later served with Franklin and Deane as commissioner for negotiating the treaty with France.§ Josiah Tucker. Tract V. The Respective Pleas and Arguments of the Mother Country, and of the Colonies. xvi, 9-51,pp [Sabin 97358] Glocester, England: R. Raikes, 1775. ***First edition of an essay questioning the underpinnings of America's claims for liberty. "Why are not the poor Negroes, and the poor Indians entitled to the like Rights and Benefits?..... § Tucker (Josiah, Dean of Gloucester). Cui Bono? or an Inquiry, what Benefits can arise either to the English or the Americans, the French, Spaniards or Dutch, from the Greatest Victories or Successes in the Present War, 141pp, Gloucester: R. Raikes for T. Cadell, 1781, § Historical and Political Reflections on the Rise and Progress of the American Rebellion, 135pp, G. Wilkie, 1780, all part of a collection of pamphlets bound together, lacking back cover, and probably other pamphlets bound in this volume, 8vo.,