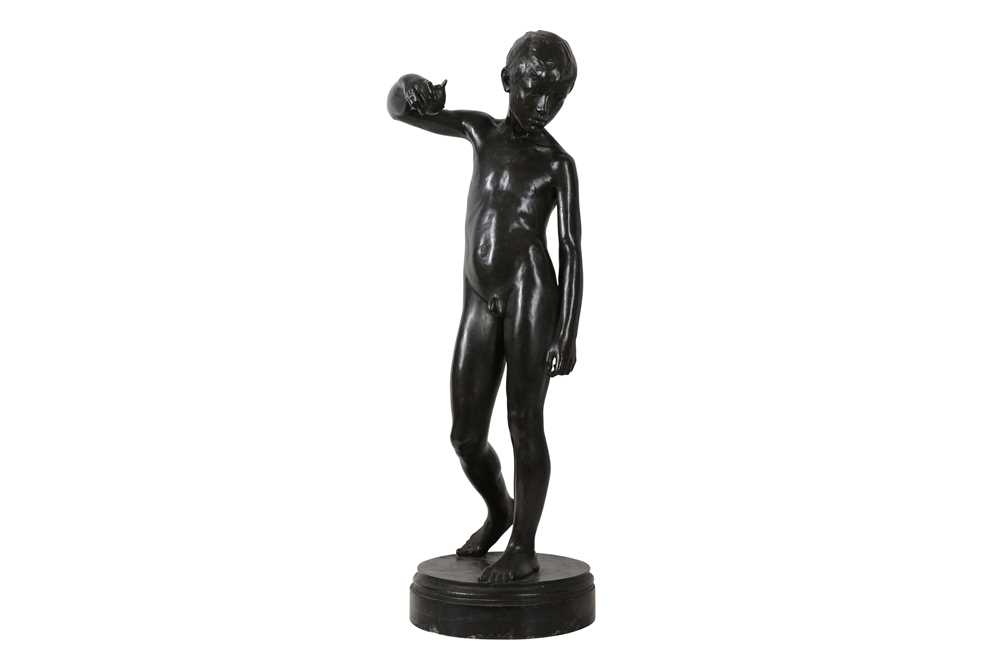 AN IMPORTANT NEW SCULPTURE BRONZE FIGURE OF A BOY POSSIBLY BY SIR WILLIAM GOSCOMBE JOHN (BRITISH, 1860-1952): ‘BOY AT PLAY’, CAST BY E. GRUET JEUNE, PARIS, 1891, depicting a young nude boy in contrapposto stance holding a yarn drop spindle in his outstretched hand, with indistinct inscription to the base and dated 1890, with foundry 'E.GRUET, JEUNE, FONDEUR, 44 bis AVENUE DE CHATILLON, PARIS', dark brown patination, on a round black marble plinth base,

82cm high (including base)

This fascinating bronze bears a striking similarity to a number of known works by Sir William Goscombe John, and the sculptor was known to have used the French foundry E. Gruet Jeune.This bronze is dated 1890 which indicates that is was not produced by a pupil or follower of Goscombe John taking influence from his famous 'Boy at Play', because his known 'Boy at Play' figure was not modelled until 1896.

In 1890, when this model was created; the young Goscombe John had finished his artistic education under one of the most important French sculptors of the day, Jules Dalou, at the South London School of Technical Art and afterwards at the Royal Academy schools. At the Royal Academy he won the gold medal and a travelling scholarship in 1887 to travel around Europe. By 1890 he had settled in Paris and was working with the great French sculptor, Auguste Rodin. It was probably in Rodin’s workshop that the sculptor first become acquainted with the E. Gruet Jeune foundry, for Rodin also used this foundry to cast his bronzes. (see for example the Buste de Saint Jean-Baptiste by Rodin cast by Gruet Jeune, now in the Musee Rodin). We know that Goscombe John used the E. Gruet Jeune foundry as other works by the sculptor feature this foundry stamp, for example see Christie’s for a cast of the ‘Boy at Play’ with the same foundry stamp (Sold 16 December 2009 lot 454). He also worked with the foundry when producing his full size public monument to William Cavendish (1808–1891), 7th Duke of Devonshire, which is in Devonshire Place, Eastbourne, East Sussex, made in 1901.

The present bronze bears a striking similarity to a number of known works by Goscombe John, the facial expression and modelling of the limbs are strongly reminiscent of his figure ‘Joyance’, a large sculpture of a young nude boy, one arm raised as he plays with a jet of water. The composition and pose of the bronze is very similar to that of the present sculpture except that the left arm is raised rather than the right. ‘Joyance’ dates to 1899 and was in Thompson Park, Cardiff before being stolen in 2010 and replaced with a replica. Goscombe John re-used his model for ‘Joyance’ by adding pipes to the base to produce a further figure of a nude boy entitled ‘Pan’, there is also a further version entitled ‘Hermes’, enhanced with a set of wings to his feet, holding a serpent and a staff and on a different base. (See Tate Gallery, TO3747, for a bronze of Pan, and Bonhams, 4 September 2007 lot 195 for Hermes).

His bronze of Morpheus, also produced in 1890 bears many similarities to the present figure, the dark, blackish patination, the nude figure in contra posto pose with arm raised and the integral circular base are features both bronzes share. (See National Museum of Wales, Cardiff No. NMW A 380').

The final obvious comparable is ‘Boy at Play’, which depicts a youthful nude stepping forward with left arm raised. 'Boy at Play' reveals the influence of both Jules Dalou (1838-1902) and of Alfred Gilbert 1853-1934). A full size bronze was exhibited at the Royal Academy in 1896 and in the Paris 'Exposition Universelle' of 1900, where John was awarded a gold medal. The sculpture appears to be a depiction of a rather mundate subject and yet the sculptor’s treatment of the physique, surface, pose and style of the youth represent an important rejection of the prevailing classical style and signify the emergence of a modernism that was expressed through the English New Sculpture movement. A version of the ‘Boy at Play’ is in the Tate Gallery, London, no. 1755.

The signature on the bronze is difficult to read but could be interpreted as 'W. JOHN Sth 1890', could it be that he signed the bronze this way instead of as Gosbombe John? He was not born with the name Goscombe, but added it to his name as a young man.

E Gruet Jeune (active 1891-1904) was founded by Edmond-Paul Gruet (1891-1904) who in 1891, following his father's death, settled at 44 bis, Avenue de Châtillon. In a commercial directory, he describes a 'fonderie artistique d'argent, de cuivre et de bronzes monumentaux. Cire perdue, étains artistiques'. The name Gruet Jeune appears in Rodin's invoices in 1897, suggesting that he was still using the foundry to cast his bronzes at this stage. The foundry also cast works for the important American sculptor Frederick William MacMonnies (American, 1863-1937) and the New Sculpture artists Edgar Bertram Mackennal (1863-1931) and Herbert Ward (1863-1919).