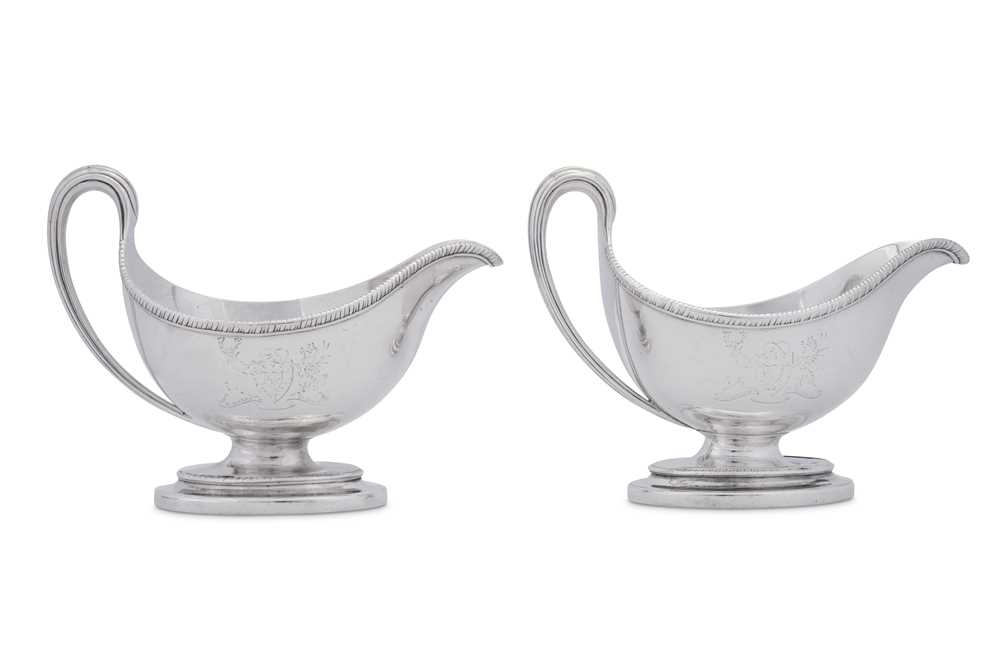 Each of bellied form with gadrooned rim, raised on a stepped oval foot with gadrooned band. Each with a reeded loop handle. Each engraved to the side with a coat of arms with another on an escutcheon of pretence, surmounted a crest of a serpent nowed, between supporters all above the motto Cavendo Tutus. Each fully marked underneath, and with No 3 14=05 and No 6 14=1. (2)

George was the third son of William Cavendish, 4th Duke of Devonshire, KG, PC (1720-1764) and his wife Lady Charlotte Elizabeth Boyle, 6th Baroness Clifford (1731–1754), the daughter and heiress of Richard Boyle, 3rd Earl of Burlington of the first creation, a famous architect and art collector. The Cavendish arms are marked with a cadecy mark of a crescent for a second son has the 4th Dukes’ second born son had died in 1781 (Lord Richard Cavendish, 1752–1781).

Cavendish sat as Member of Parliament for Knaresborough from 1775 to 1780, for Derby from 1780 to 1797 and for Derbyshire from 1797 to 1831. On the 10th September 1831 he was raised to the peerage as Baron Cavendish of Keighley, in the County of York, and Earl of Burlington, a revival of the title held by his maternal grandfather. In 1815, Lord Burlington bought Burlington House in Piccadilly from his nephew, the 6th Duke of Devonshire. With the architect Samuel Ware, he made a number of significant modifications to the house, including the building of Burlington Arcade along the west side. He died at Burlington House in 1834 and was buried in All Saint's church, Derby.