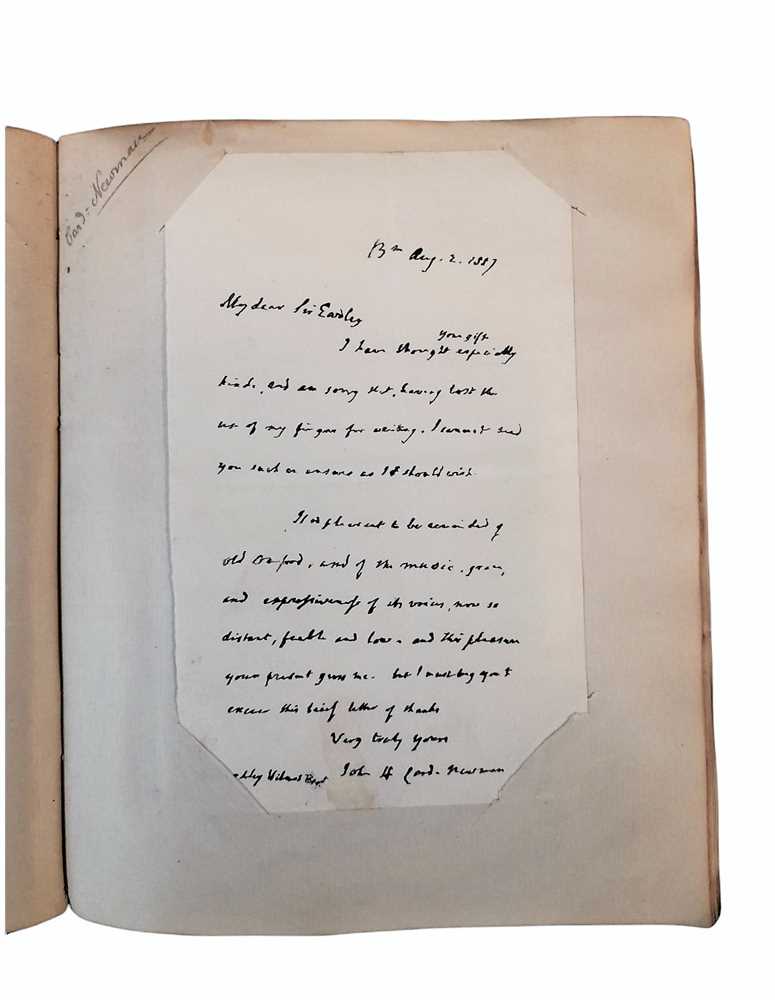 Autograph album featuring letters and signatures by prominent 19th century figures, the letters mostly addressed to Sir John Eardley-Wilmot, signatures including: Eduard Strauss (autograph music quotation signed), William Ewart Gladstone (two clipped signatures and an autograph letter reading in part "I will not deny that I have largely reviewed the points of the Bill of 1886 with a view to improvement. But I am bound to say that I could not prevail in framing alterations without reference to the sentiment of Ireland", three pages, 8vo, London, 2 July 1889); Charles Stewart Parnell (clipped signature and one letter signed, promising to submit Wilmot's letter to his colleagues, one page, 4to, Avondale, 10 September 1884); Randolph Churchill (four clipped signatures and one autograph letter, saying "You have always been most generous and encouraging to me...I do really think we have got the measure of the G.O.M. [Gladstone] and that his most mad and mischievous career is near its end. The meeting at the Opera House last night was a great success and must provide a permanent impression upon the public", three pages, 4to, 2 Connaught Place, 15 April 1886); George Duke of Cambridge (clipped signature); Victoria Duchess of Kent (letter signed, thanking Wilmot for the books he sent for her daughter, one page, 4to, Kensington Palace, 13 May 1831); Joseph Chamberlain (two clipped signatures); Mary Elizabeth Braddon (clipped signature); Cardinal Henry Edward Manning (three autograph letters, discussing translations and other matters, Archbishop's House, Westminster, 20 July - 30 November 1891); Cardinal John Henry Newman (autograph letter saying "I have thought your gift especially kind and am so sorry that, having lost the use of my fingers for writing, I cannot send you such an answer as I should wish. It is pleasant to be reminded of old Oxford", one page, 8vo, 13 August 1887); Lord Salisbury (four autograph letters, one thanking the recipient for sending a copy "of your admirable address to your constituents on the Franchise Bill", the others discussing various matters, Hatfield House, 6 May 1884- 26 May 1887); Lord Derby (autograph letter saying "I am much indebted to you, as I am sure the Chancellor of the Exchequer will be also, for the offer of your valuable assistance in drafting a Reform Bill...In point of fact, the Bill is already in such measure drawn, and it will be ready to be submitted to Parliament on the 18th", two pages, 8vo, St. James's Square, 6 March 1867), and others; clipped signatures are mostly pasted onto album pages whilst letters are loosely mounted, some age wear overall, marbled-paper covered boards, wear to spine and corners, 4to, c.1860s-1890s.