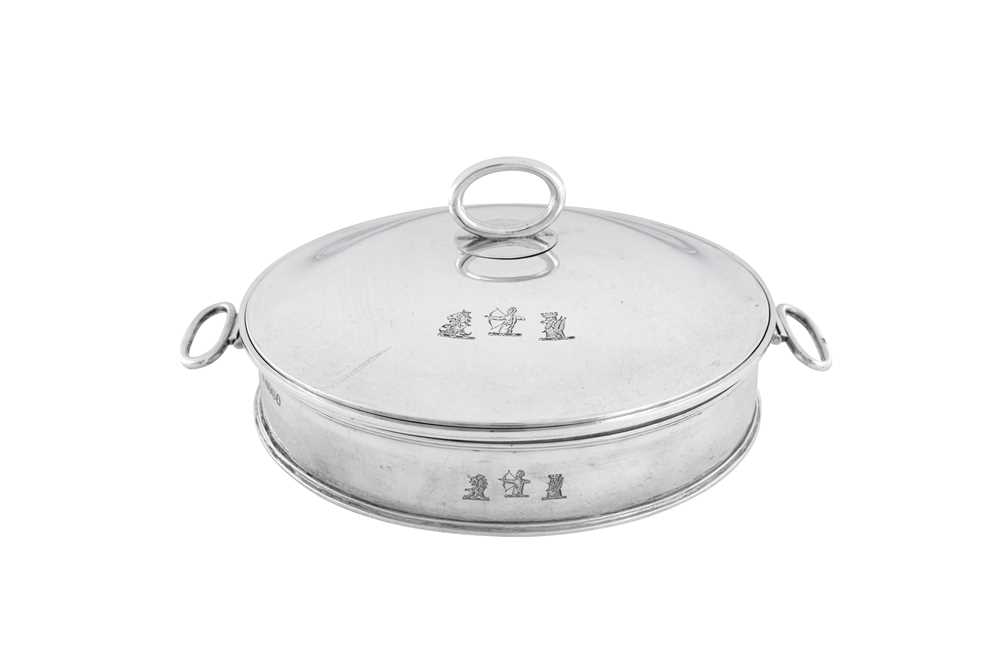 Of circular form with moulded edges, each side with opposable loop handles. The pull off fitted lid with a detachable loop handle. Engraved to the side with a contemporaneous crest of a stork, holding in her dexter claw a pellet, otherwise later engraved with three crests to the lid, base side and the removable centre plate: a lion's head erased, charged for distinction with a cross crosslet; a man from the middle shooting an arrow from a bow, charged for distinction with a cross crosslet; in front of a tower, a demi-swan, wings elevated, collared. The removable interior lid to the hot water well engraved underneath No 11, the underside of one handle engraved No 18. Fully marked to side of handle, part-marked to plate bezel and to each handle, the lid part-marked underneath finial.

The three crests are those of Burdett, Coutts and Bartlett,

Lady Angela Burdett-Coutts became one of the wealthiest women in England as heir to the vast fortune of Harriet Beauclerk, nee Mellon, Duchess of St. Albans (1777-1837) formerly the wife of Thomas Coutts (1735-1822) the founder of the Royal Bank Coutts & Co. In 1871, in recognition of her philanthropic work, Queen Victoria created her suo jure Baroness Burdett-Coutts of Highgate and Brookfield in the County of Middlesex, she was also the first woman to receive the Freedom of the City of London in 1872. Her lifelong companion and former governess Hannah Brown, to whom she was devoted, died in 1878. Lady Burdett-Coutts wrote to a friend that she was utterly crushed by the loss of "my poor darling, the companion and sunshine of my life for 52 years". On the 12th of February when she was 67, she shocked polite society by marrying her 29-year-old secretary, the American-born William Lehman Ashmead Bartlett, who became MP for Westminster on 12 February 1881. Her new husband changed his surname to Burdett-Coutts. Because of her husband's American birth, the clause in her step-grandmother's (the 9th Duchess of St Albans) will forbidding her heir to marry a foreign national was invoked and Burdett-Coutts forfeited three-fifths of her income to her sister.

Other items bearing these three crests or related heraldry: