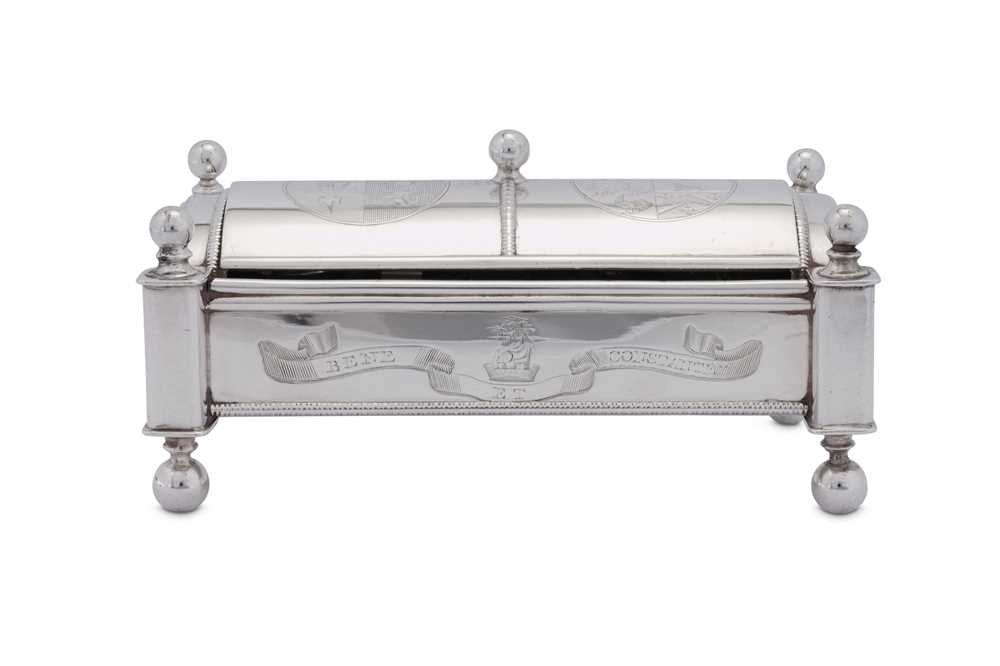 Of domed casket form, the corners of four pillars raised on ball feet and with four ball finials. The domed lid raised by a central ball finial, either side engraved with circular cartouche. The left engraved with an impaled coat of arms surmounted by a bishop’s mitre, the right side with a quartered coat of arms surmounted by a crest of a demi-lion rampant holding a cross crosslet. The front engraved with a crest of out of a mural coronet a lion’s head erased charge with a bezant, with the motto below Bene Et Constanter. The reverse engraved with an oval beaded cartouche with initials FB in cursive script against a striated ground. All with corded edges. The interior fitted with three clear glass jars fitted with three silver lids, one drill pierced for pounce. Fully marked underneath, the lid unmarked, fully marked to each lid.

The dexter impaled arms are for the Bishop of Cloyne impaling Bennet, for William Bennet (1746 – 1820), Bishop of Cloyne 1794-1820. The sinister arms are for Mapletoft impaling Cockayne for Frances Mapletoft the daughter of Rev Nathaniel Mapletoft, Rector of Broughton, co. Northampton and the Hon Anna Maria Cockayne (1739-1825) who were married on the 28th July 1768. She was the granddaughter of Charles Cockayne 5th Viscount Cullen (1710-1802).

William and Frances were married in 1791, and thus her name become Frances Bennet, relating to the initials FB engraved in this inkstand.

William Bennet, was born in the Tower of London. He was educated at Harrow School, where he made the acquaintance of Dr. Parr, Gilbert Wakefield, and Sir William Jones, proceeding afterwards to Emmanuel College, Cambridge. The dates of his degrees were: B.A. in 1767, M.A. in 1770, and D.D. in 1790. In 1773 a fellowship was conferred upon him, and for many years he was the chief tutor at the college. Among his pupils was the Earl of Westmorland, who, on his appointment as lord lieutenant of Ireland in 1790, nominated his old tutor as his chaplain. Bennet's promotion was then assured, and it came quickly: from 12th June 1790 to 1794 he held the see of Cork and Ross, and in the latter year was translated to the more lucrative bishopric of Cloyne. It was at one time proposed to appoint Bishop Bennet to an English see, and he was put in nomination for the provostship of Trinity College, Dublin, but was rejected in favour of another candidate. Among the pulpit orators of his day he took a high place, and his services were in frequent requisition. The use of these arms for Bennet suggests kinship to the family Bennet, Earl of Tankerville.