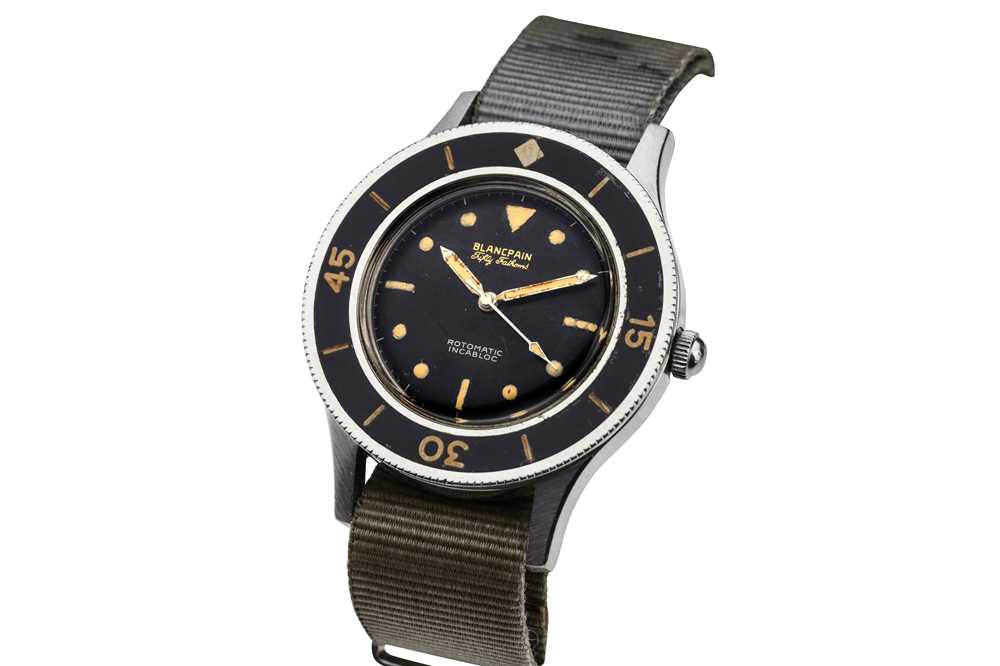 In the early 1950’s, French Navy Captain Bob Maloubier and Lieutenant Claude aspirant Riffaud, of the ‘Nageuers de combat’ (Combat swimmers), required a watch rugged and reliable enough to safely accompany the specialist force to the deepest waters during difficult missions. Maloubier drew up requirements for his ideal watch but no company wanted to invest in what was considered a niche market. Unable to find a suitably keen manufacturer, he himself drafted preliminary sketches of what would ultimately become the Blancpain Fifty Fathoms. Eventually, Maloubier and Riffaud contacted the CEO of Blancpain, Jean-Jacques Fiechter, who was an avid diver himself and he accepted the challenge.

After its release in 1953, the model proved to be robust and with no real contemporary competition went on to serve Israeli, Spanish, German and the United States special forces, proving crucial to specialist dive teams undertaking sabotage, coastal raids, underwater reconnaissance and the like. Furthermore, Jacques Cousteau and director Louis Malle used the Fifty Fathoms during the shooting of ‘Le Monde du Silence’ – the 1957 award-winning underwater film. Its size was due both to maximising legibility and to make room for the external rotating bezel – the first of its time and a safety mechanism that would allow the diver to line up the bezel with the minutes hand when starting a dive and thus making it clear how many minutes had elapsed when underwater.

Over 50 derivatives of the Fifty Fathoms were produced, many for specialist military/industry use and never for public purchase.

Given their limited production numbers, the demanding conditions that these watches were subjected and the thirsty collectors market, good examples offered for sale are few and far between.