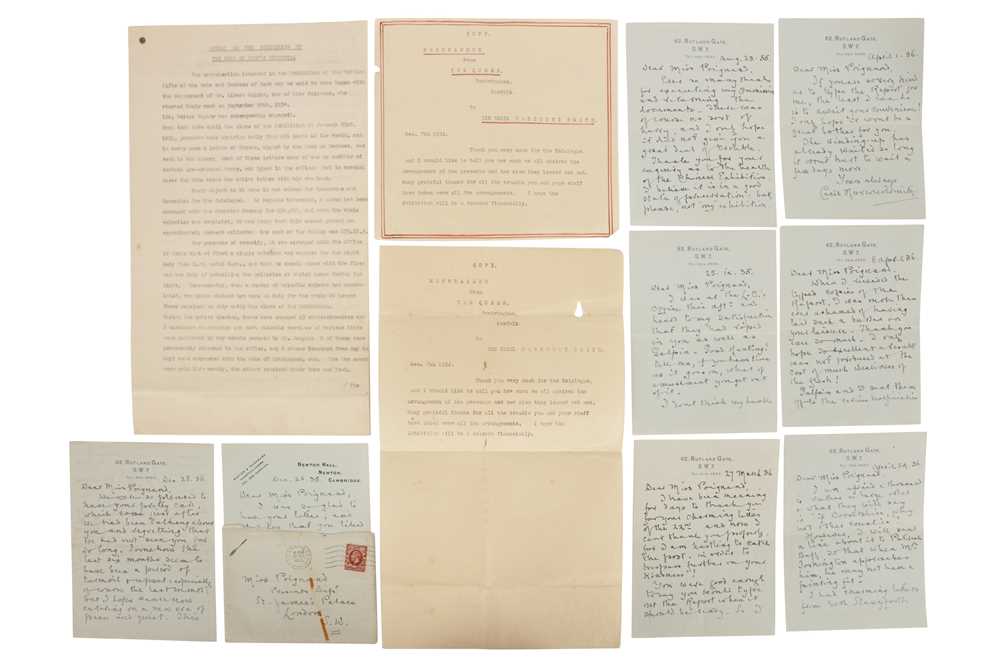 all to Miss Beryl Poignand (Governess and lifelong confidante of Queen Elizabeth, the Queen Mother, who was also employed as a typist in the office of the Comptroller to Prince George, Duke of Kent, at the time of his marriage to Princess Marina). Harcourt-Smith thanks Poignand for having undertaken a commission to produce a typed report on the Exhibition of the Duke of Kent’s wedding presents and hopes that it did not cause her a great deal of trouble, further explaining "If I am not asking too much, what I should like is to have one very nice one for Queen Mary. One for the Duke of G. & one for Lord Cromer. I need hardly say that I shd. like one myself if it wd. not be too grasping", in later letters informing her that he had received a charming acknowledgement from the Queen and that he had been told the Duke himself would write (‘but I never supposed he would – and he hasn’t!’) and in the final letter making a reference to the abdication of King Edward VIII "Somehow the last six months seem to have been a period of turmoil & upset: especially of course the last month; but I hope we are now entering on a new era of peace and quiet", One of the letters is accompanied by the original envelope addressed to Poignand at the Presents Department of St. James’s Palace fifteen pages (total), 8vo, Rutland Gate, London, and Newton Hall, Newton, Cambridge, August 1935 – December 1936; together with two typed copies of memorandums from Queen Mary to Harcourt-Smith ("I should like to tell you how much we all admired the arrangement of the presents and how nice they looked set out") and a carbon typed copy of Harcourt-Smith’s report on the Exhibition of the Duke of Kent’s presents, six pages, folio, 9 April 1935.