A BUDDHIST PAINTING OF ‘DESCENT OF AMIDA’ 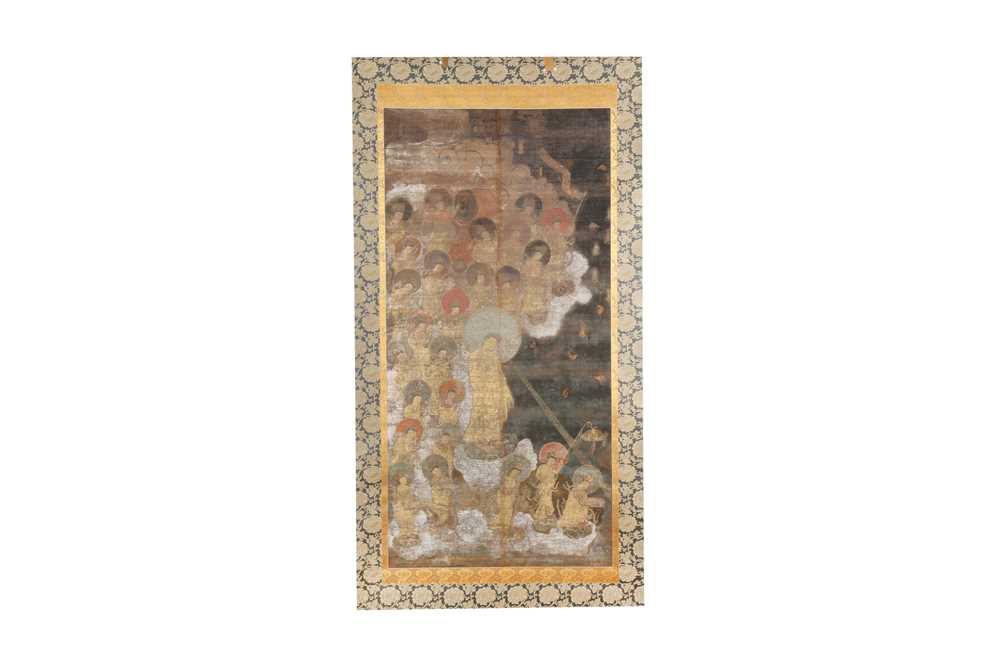 A BUDDHIST PAINTING OF ‘DESCENT OF AMIDA’

A JAPANESE BUDDHIST PAINTING OF ‘DESCENT OF AMIDA’.

Painted in ink, colour, and gold on silk/linen, depicting Amida standing on a lotus pedestal in the centre, accompanied by heavenly dancers and musicians, descending on the clouds from the top left, His attendant, Kannon (Guanyin) at the front, kneeling to offer the lotus throne on which the deceased will be transported back to the Pure Land, all surrounded by lotus petals and auxilliary deities, mounted in silk as a hanging scroll, 129.5 x 64cm.

Amida (the Buddha of infinite light) and the Pure Land, have been among the popular devotional Buddhist images in Japan, although until the twelfth century, Amida was usually represented seated. During the Kamakura period (1185 – 1333), the concept of 'the welcoming descent' flourished and Amida became more approachable to people, depicted standing and taking action, descending from his ‘Pure Land’ to fetch his devotees. Jyodokyo (the Pure Land Buddhism) permeated the Japanese soil during the Kamakura period, after a long war between two strong clans (the Genpei war), which resulted in a shift of power from the Emperor to Shogun (the samurai lord). People were anxious and seeking salvation striving to be reborn in a utopia where they were free from all the sufferings in the war-torn world around them.

For an example of a painting with a similar composition see Shojuraigo- temple at Hiei, illustrated in Joji Okazaki, Jyodokyo-ga, Nihon no Bijutsu series, no 43, pl 80.