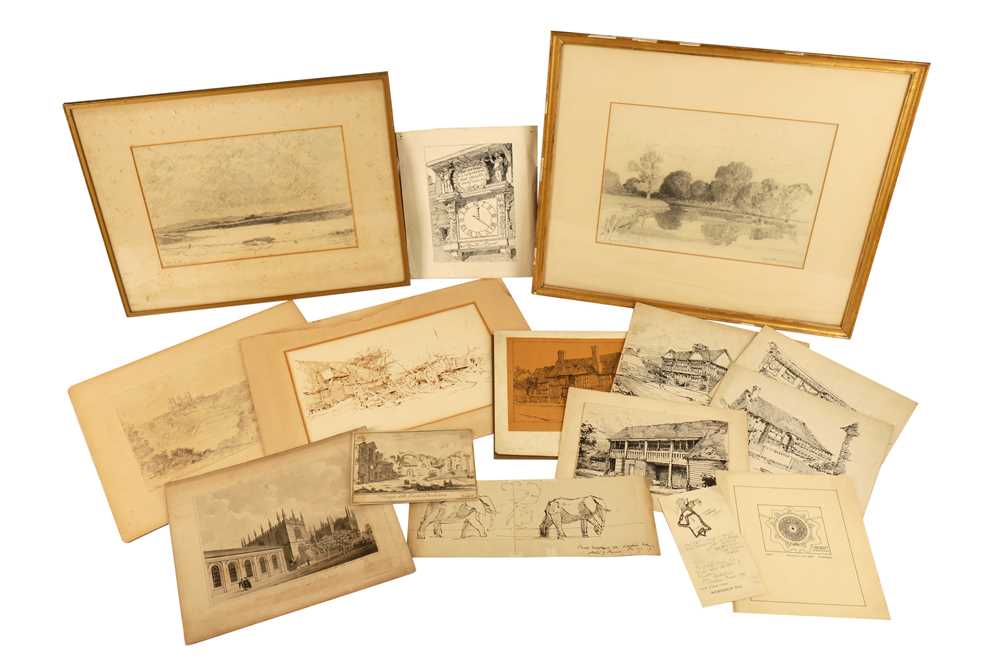 A large and important archive related to Sir Reginald and Austin Blomfield featuring a collection of sketchbooks (5) by Sir Reginald Blomfield and a series of drawings and sketches done throughout his lifetime, also containing books written by Reginald and used as reference by him and other personal items like letters of correspondence and a unique bronze medal of Bishop Blomfield (another ancestor). Items pertaining to Austin Blomfield include a large quantity of pen and ink sketches, watercolours, his sketchbooks and some reprinted images. Other ephemera include his military commission to the RAF, miniature medals, handwritten notes towards a book about France, and a 'Camouflage Office Log, 21 December 1939- Austin Blomfield' plus a diary of his war activities from 1939 to VE Day (8th May 1945). (Large quantity)

Provenance: the archive comes directly from the descendants of Reginald and Austin Blomfield

***Reginald Theodore Blomfield was born at Bow Vicarage, Exeter, Devon, on 20 December 1856. After reading Classics at Oxford he was articled to his uncle Sir Arthur Blomfield and entered the Royal Academy Schools. After two years under his uncle, he left after a 'misunderstanding'. He was admitted ARIBA in 1881 and set up practice in 1884 after which he also became a member of the Art Workers' Guild and the Arts & Crafts Exhibition Society and in 1886 married. He settled in Rye building several houses one of which was let to the novelist Henry James.

In the 1880's he expanded his career as an architect to illustrate and write. He was elected as an Associate of the Royal Academy in 1905 and re-admitted to RIBA to the RIBA as a fellow in 1905 and appointed as Professor of Architecture at the Royal Academy in 1907-11. In 1911 Blomfield published his greatest literary work, 'A History of French Architecture 1494-1661', the studies for which strongly influenced his later designs.

In 1912 Blomfield was elected President of the RIBA and was Royal Gold Medallist in 1913. was appointed one of the three principal architects to the War Graves Commission in 1918. In addition to the Menin Gate at Ypres, he designed the War Cross, a standard feature of all British war cemeteries. He was knighted in 1919 and continued to practice into his old age with his son Austin Blomfield (1895 - 1967).

The British Architectural Library Drawings Collection has a number of his perspective drawings produced for Royal Academy exhibitions and an incomplete collection of his sketchbooks, photographs and papers. Other documents still remain in the possession of his descendants, but Sir Reginal Blomfield disposed of the majority of his drawings during the Second World War.