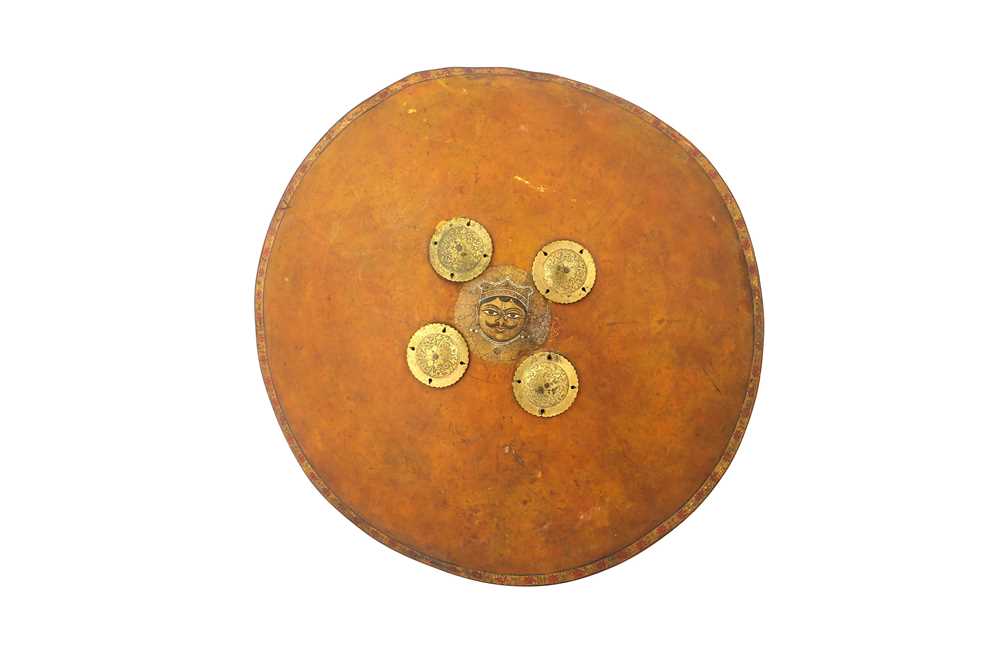 Of typical convex rounded shape, with four applied brass bosses engraved with rosette and scrolling vegetal sprays, the gilt and lacquered decoration in the centre featuring the face of Surya, the Indian Sun God, or of Shiva Ji, deemed to be the founder of the Maratha power in India, a traditional insignia of the Mewar royal court, the figure adorned with jewels and pearls, red-painted and gilt floral motifs in a narrow circular band around the edges, the reverse plain except for a handwritten provenance cartouche in sepia ink, 46cm diam.

The provenance cartouche at the back reads: This Daal shield hung in the home of Major C.F. Bruere at Lucknow during the first days of the Rebellion when the Natives rioted and assaulted the Bruere residence, a faithful Sepoy seized this from the wall to protect Mrs. Bruere, stopping a matchlock ball that was mortally aimed.

This high-quality Indian rhino hide dhal (shield) was hanging by repute in the residence of Major C.F. Bruère in Lucknow at the beginning of the Great
Sepoy Rebellion, also known as the Indian Mutiny (1857). Upon close inspection, the only main indentation visible on the surface of the shield, just to the right of the god's face at 3.00 o'clock, has a rounded shape. This is in line with the provenance text at the back of the shield, providing visual evidence of where the matchlock lead ball would have impacted the seasoned hide.

Charles Fleming Bruère, the son of Captain James Bruère of Bedfont, Middlesex, was born on 7 November 1812. His first trip to India was in October 1829, followed almost immediately by a period of leave and furlough on account of his health. He returned to India in 1833 and spent the following twenty-two years in the Subcontinent, covering a series of official roles in the military until the appointment as Major in 1855. In the first months following the Indian Mutiny in 1857, the 13th regiment of the Bengal Native Infantry, under the command of Major Bruère, distinguished itself in the courageous defence of the Residency at Lucknow. This would have not been possible without the loyalty and contribution of the Sikh soldiers in the regiment, who fought bravely and did not turn their backs to the British. Bruère served in the Residence defence until the afternoon of the 4th of September 1857, when he was mortally shot trying to pick off an enemy sniper on the roof of the Brigade Mess. His Punjab Campaign medal was once part of the Brian Ritchie Collection of H.E.I.C. and British India Medals and has been successfully sold at auction by Dix Noonan Webb, 23 September 2005, lot 55.