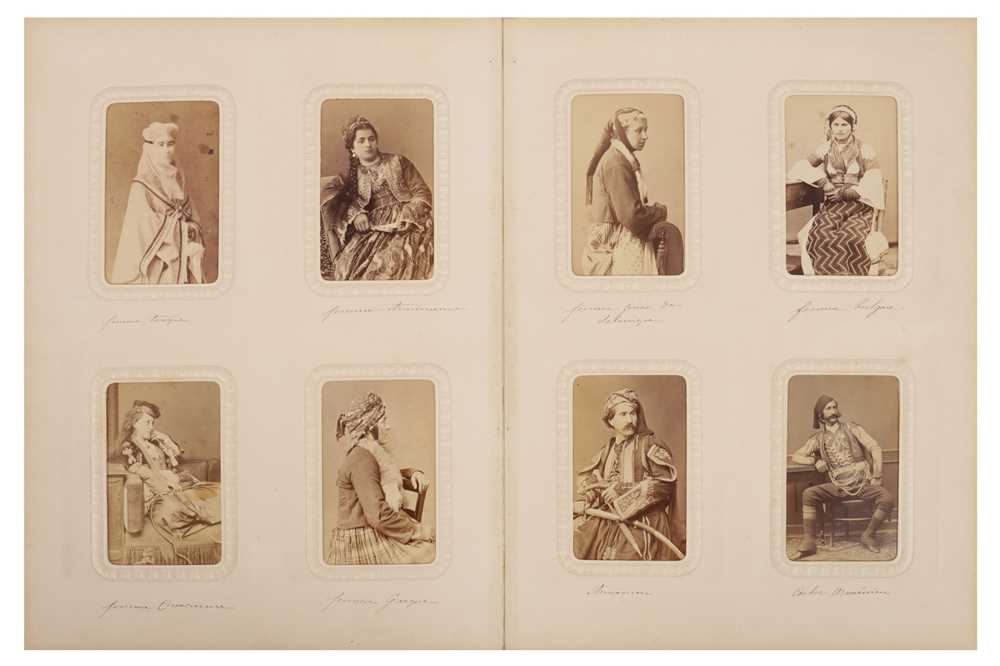 ALBUM CONTAINING 46 CARTES DE VISITE PHOTOS OF OTTOMAN INTEREST including 4 of Abdul Aziz Kahn (1830-1876, Sultan of Turkey, Abdulhamid II (1842-1918, Ottoman Sultan), 3 of Prince Youssouf Izzedin Effendi (1857-1916, Son of the Sultan Abdul Azis), Mehmed Fuad Pasha (1814-1869, Ottoman Administrator), there are then a selection of men an women in National dress, a camel, a member of the Sultan’s bodyguard, Ottoman families, a Ottoman in uniform with a sword, women in long robes with yashmaks, working men with heavy loads on their back, several images of men and women, Ishma’il Pasha (1830-1895, Viceroy of Egypt, an original photograph of a port full of ships (possibly Constantinople), Ahmed Vefik Pasha (1823-1891, Ottoman Statesman, Ambassador to France) and several photos of shorelines with ships, and one of a Bath-house, by various photographers including Downey, Disdiri and R. Roberts Willson in the UK and Basile Kargopoulo, R. Caracachia, P. Sebah, Pera, Abdullah Freres and El Chark of Constantinople in original morocco album with brass catch with a jeweled decoration on the front